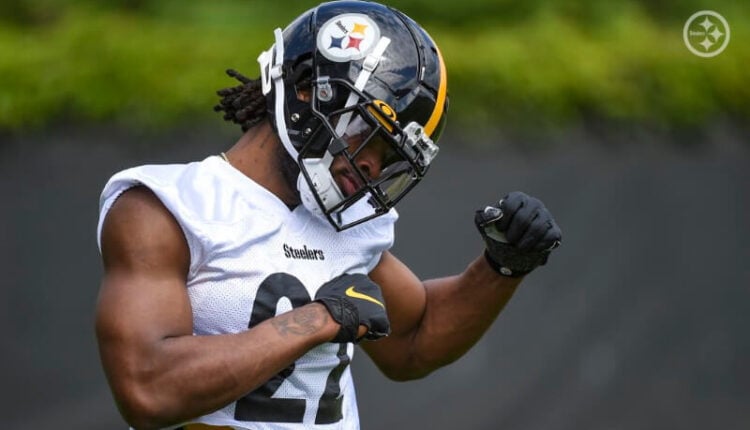 As NFL front offices have started to take into account positional value more than ever, it is becoming less common to see them spend first-round picks at the running back position. Meanwhile, whereas new contract extensions at other positions continue to reset the market, running back contracts have plateaued. In other words, when a team wants to improve their roster, they are becoming less inclined to believe a running back will solve their problems.

Thus, when a running back is taken in the first round, it should catch our attention. With the 24th pick in the 2021 NFL Draft, the Steelers selected Alabama running back Najee Harris, hoping he’d be their savior. Given their issues elsewhere, it is unlikely that turns out to be the case. For fantasy, though, it is time we take note. Harris is clearly positioned to be a true workhorse running back, and, at some point, it’s about time we start overthinking things with regards to his fantasy value moving forward.

To be a first-round pick, it is obviously imperative that you produce at a high level in college, especially at a position that isn’t valued significantly. Luckily, Harris accomplished just that, earning a PFF grade over 88.1 in his final three seasons at Alabama. Meanwhile, he averaged over 100 (108.2) rushing yards per game, was efficient with 5.9 yards/attempt, and also worked his way into the receiving game with about 25 receiving yards per game.

Despite Alabama having an abundance of receiving talent, including Heisman Trophy winner DeVonta Smith, Harris still received a 13.4% target share in his final year in college. Per Player Profiler, that ranked in the 90th percentile among running backs, which is significant; target share if highly correlated from college to pro. Additionally, even with Alabama being a pass-heavy offense, Harris still proved his ability to handle a heavy workload with back-to-back seasons with 200+ carries.

Harris’ production was strong, and what is even more encouraging was the rave reviews he received from draft analysts. According to Jordan Reid of The Draft Network, Harris projects as a running back that can have passing concepts designed around his abilities, he can routinely put second-level defenders in a bind with schemed patterns to attack coverage. In my opinion, running backs such as Javonte Williams and Travis Etienne may have been more efficient or better pound-for-pound than Harris. Yet, Harris was the player seen as the top player in this class, and is the only one who has been tested in a three-down role. For fantasy purposes, this matters tremendously.

There seems to be a perception that rookies carry greater risk in fantasy football, so they shouldn’t be selected with a high pick. Yet, when analyzing the recent history of first-round running backs, this couldn’t be further from the case. Here is how each running back has finished in PPR overall points since 2012:

Of the running backs who were healthy and not in committee situations, the track record is quite strong. Contrary to quarterbacks and tight ends, there isn’t much of a learning curve for rookie running backs when adjusting to the NFL. In fact, it is more common that their peak seasons come at the beginning of their pro career, given that it is a more athletically-based position. In my opinion, Harris projects more in the mold of Elliot, Gurley, Richardson, Fournette, McCaffrey, and Martin than he does some of the duds on this list, especially as a more polished player with such a strong track record. By taking Harris, you’re actually siding yourself on the right side of history. Thus, the risk would really be associated with passing on him!

The Plan For Najee Harris In Pittsburgh

A very frustrating aspect in fantasy football has to be projecting how many touches a running back will receive. As mentioned, running backs have continued to get de-valued in the current marketplace, making it more common that teams try to patch their backfield together in a committee situation.

Luckily, this will not be a problem for Harris. In a recent interview with NFL Network’s Ian Rapoport, general manager Kevin Colbert specifically labeled him as a three-down running back. Is that not the most necessary endorsement there is? There are plenty of rumors that Pittsburgh was specifically upset about their running game, believing that a running back like Harris could solve their issues. Once again, the “real-life” possibility of this is very slim, but we are playing fantasy football, right? Why not take full advantage!

During his time in Pittsburgh, Le’Veon Bell averaged 24.9 touches per game. That’s over 400 touches for a 17-game season. Will Harris reach that amount? Projecting anyone for those types of touches is foolish, and Bell certainly owned those touches. Yet, we have great evidence that the Steelers prefer to have one true “workhorse” running back, which explains the selection of Harris. In my opinion, 300 touches aren’t just the hope for Harris, but the 50th percentile outcome.

Oftentimes, we try to decipher how efficient running backs are, allowing it to lead our analysis. Yet, should this actually be where we spend our time? There is very little year-to-year stability when it comes to rushing efficiency, which makes sense; running back production has been found to be more subject to outside circumstances such as offensive line, opposing defense, and box counts. Really, what we should be doing is projecting volume, which has quite the correlation with PPR points produced, per Jared Smola of DraftSharks:

Handily, we already have a great idea of what Harris’ role will be, given Colbert’s comments and the team’s investment in him. For perspective, of the 18 snaps the Steelers’ starters played in Thursday’s preseason affair with the Cowboys, Harris played in all 18 of them. Add in the likelihood he vultures targets in an offense with a low average depth of target and the ceiling is through the roof for Harris in 2021. Really, it’s his world, and we’re just living in it!

Due to some concerns about him being a rookie and the poor state of Pittsburgh’s offensive line, Harris currently is not being drafted as a top-ten running back in PPR leagues. Knowing what we know about the extremely high correlation between touches and PPR finish, why are we so concerned about what Harris’ efficiency numbers were going to look like. Any time I can get a rookie first-round running back projected for a true “three-down role”, I’m going to pounce. Feel comfortable selecting Harris as a top-ten running back in re-draft PPR leagues. Meanwhile, in dynasty, he’s a potential first-round pick, while in rookie drafts he’s the clear top option. Invest in the combination of the floor provided by his touches combined with the ceiling of getting a running back during his peak years.

Pitching Prospects on the Rise in Dynasty Leagues: American League