MLB Injury Report: Zac Gallen’s Path Back to the Mound 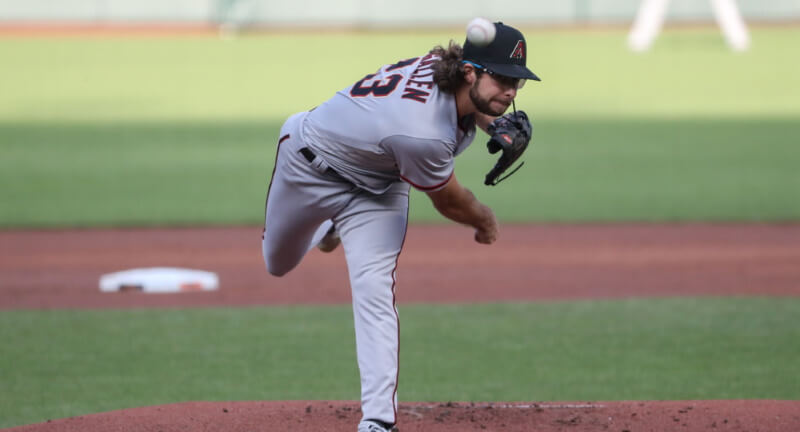 Nic Civale is a Doctor of Physical Therapy and former NCAA Division I Baseball player. He combines his knowledge of anatomy and physiology with that of baseball mechanics to provide expectations for injured players. Utilize The MLB Injury Report to make the most of your fantasy season. Today he looks into the recent injury woes of talented right-hander Zac Gallen.

Diagnosed with a UCL sprain in early May, Zac Gallen has begun his return to throwing bullpens. He is a staple of many fantasy managers’ rotations and one of the best young pitchers in MLB.

The Ulnar Collateral Ligament (UCL) is a small, yet strong ligament that connects the humerus, or upper arm, to the proximal end of the ulna. The ulna is one of two bones that make up the forearm. The job of the UCL is to maintain stability in the elbow joint as it experiences massive rotational and translational forces during the throwing motion. As you may have heard from coaches or baseball analysts, the overhead throwing motion is not necessarily one that our bodies were designed for. To tolerate the repetitive nature of overhead throwing, the baseball athlete effectively reshapes their body and muscular identity to accommodate for the “unnatural” motion.

To most physical therapists, a baseball player is easy to spot without the need for an interview because they will almost certainly exhibit more shoulder external rotation and less internal rotation in their throwing arm. Also commonly seen is a greater allowance for trunk rotation to one side (unless they are a switch hitter or thrower). Additionally, there is almost always some degree of wear and tear on the UCL. Yes, many, if not most, ballplayers will end their careers with micro-tears, inflammation, and even scar tissue build-up in or around their UCL. If you took an MRI of all MLB pitchers, it wouldn’t surprise me to learn that 90% of them had evidence of some type of UCL sprain. Which brings us to the hero of this story, Zac Gallen.

Diagnosed with a stress fracture in the radial head of his throwing arm earlier this year, Zac Gallen has more recently learned of a UCL sprain in the same arm. He has been resting his arm since experiencing discomfort back in early May. The last start he completed was May 7, where he completed six frames of 1 run ball. After about 3 weeks of rest and therapy, his pain had diminished, the swelling had abated and subsequent imaging and testing showed appropriate healing.

On Tuesday, June 1, Gallen threw a 30 pitch bullpen, with the entire arsenal on the table. There have not been any reports of setbacks or discomfort and it appears he is ready to progress in intensity and volume. If he was to progress with his pitch count by about 15 pitches per 5-day rotation, he would theoretically be available by late June or early July. There is a heavy dose of optimism in that projection, for sure, but it is possible.

Gallen’s scenario is a very fitting example of the dangers of giving up on a player too early if you don’t completely understand the injury and its implications. Many fantasy managers were hastily selling low on Gallen, assuming Tommy John surgery (TJS) was imminent. Ultimately, it is still possible that Gallen has a setback and receives the surgery. After all, he’s not in the clear after a successful 30-pitch pen. But deeming a player as doomed after any type of injury pops up in the throwing elbow is something fantasy managers are too hasty in resorting to. As previously mentioned, you’d likely be hard-pressed to find an MLB pitcher who hasn’t undergone some sort of UCL injury or damage; a sprain isn’t a ticket to the operating room.

Additionally, we know Gallen was recovering from a separate and unrelated arm injury in the radial stress fracture. This was essentially a crack, but not a displacement, of the other forearm bone, with no isolated long-term implications, whatsoever. The only long-term effect this may have indirectly had on Gallen is that it disrupted his throwing program and routine. It is possible that this alteration of scheduling may have influenced the ultimate sprain of the UCL. There is no way we could ever know for sure, but it is reasonable to connect the two.

This makes me think the UCL sprain was not something that was inevitable and slowly approaching. There’s nothing glaringly abnormal about his mechanics, he has not experienced a dramatic velocity gain or a significant arsenal change. His control has been characteristically good. Nothing about his game draws a red flag. I think the UCL sprain was more likely to be related to the abnormal year he had had so far.

Pitchers are generally an extremely regimented and schedule-based species. And Gallen has not had any normalcy to his year. A month-long alteration is his throwing program and daily routine coupled with a nearby fracture certainly seem more responsible than anything else.

So what does this mean going forward? My only option is to look at this as a physical therapist would. I could see it being an exam question in a biomechanics final…

You are evaluating a 25-year-old, otherwise healthy, professional baseball pitcher. He has experienced a UCL sprain as evidenced by MRI. There are no concrete indications that this was a progressive injury, linked to increased load, or arsenal change. There has been no other recent UCL injury. The athlete recently experienced a nearby stress fracture that altered his throwing program and caused a month-long progression in workload to return to his baseline. The athlete was able to return from this stress fracture and perform to his standards for over 1 month until he experienced discomfort in the medial elbow. He is currently progressing his pitch count and has successfully built up to a 30-pitch bullpen without symptoms. How do you approach the remaining rehabilitation program?

A) Contact surgeon for additional consultation. Suggest TJS due to previous sprain.

B) Aggressively progress patient though throwing program up to his previous norms. He is ready for increased intensity.

C) Incrementally increase workload and complexity of throwing sessions, with constant evaluation of symptoms, while checking patient range of motion and strength.

D) Tell your fantasy baseball friends to trade him for cents on the dollar; he’s toast.

This will be a closely observed and slow process, but everything that is occurring points to a return in 2021, even if it means waiting until the All-Star break. The Diamondbacks would be very smart to be extremely cautious with their young ace, and heed any warnings based off of negative symptoms. But I am all in on Gallen, as I have been for years. He is a special pitcher, who has a great understanding of what he needs to get out of his body to be a successful pitcher. It isn’t a coincidence he has had such success in the league without elite velocity or stuff. If he continues to increase his workload without setback, I’m not going to be worried about any long-term implications here. You shouldn’t either.

Did you know Eric Cross has recently updated his Dynasty Rankings? Check them out here for all the best info on the long-term values of the top MLB and MiLB players.