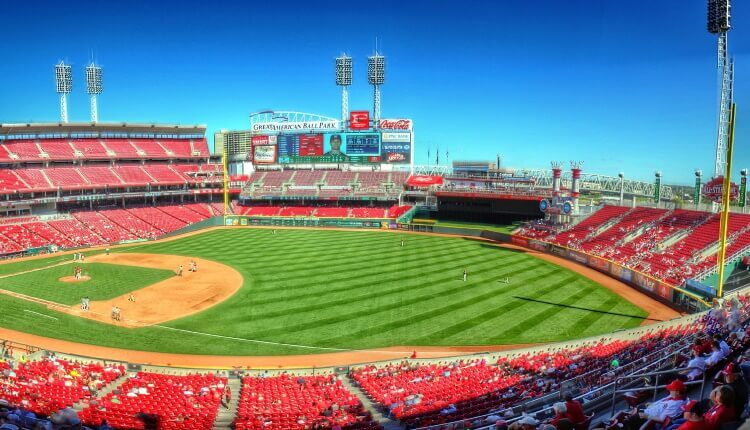 You can see, we have Coors Field, Great American Ballpark, and Camden Yards that all host elite hitting environments. There are also plenty of pitching-friendly options over the weekend. More on that in the Ballparks section of this column.

Presently, the weather looks quite windy on the East Coast for part of the weekend. Depending on which way and how strong that wind blows, it could be a benefit for either pitchers or hitters in open stadiums. There might be some rain chances in Seattle this weekend that could threaten part of their series against the Angels.

Milwaukee Brewers (@ CIN) – Just because these two offenses recommended today might be chalk doesn’t mean that they are wrong. When we have two offenses that will be heavily rostered like the Brewers and Padres this weekend, we must first think about how to use that knowledge against the field. Overweight or underweight is the question you will likely find yourself asking all weekend.

The Brewers will travel down I-65 South to face Cincinnati and a pair of rookie prospects with a lot of promise, but also a lot of question marks. Against righties Hunter Greene and Graham Ashcroft, we should load up on Brewers’ left-handers like Christian Yelich, Rowdy Tellez, and Omar Narvaez. Great American Ballpark allows 24% more home runs to left-handers than any other park the last three years.

San Diego Padres (@ COL) – Compared to this year’s version of the Colorado Rockies starting rotation, however, the Reds look like the 1990s Atlanta Braves. The Rockies’ starting staff ranks 28th in strikeout rate (17.2%) and 26th in SIERA. Their .288 batting average allowed is tied for the worst in the league.

The Padres, meanwhile, have been absolutely mashing lately. They lead the majors in runs scored the last two weeks, and are top-10 in batting average, on-base percentage, and slugging percentage as well. Things look especially promising against lefty Kyle Freeland on Friday. The Padres rank sixth in the major in on-base percentage against that handedness this year. The Padres are likely to have the highest implied total of any team all weekend long.

San Francisco Giants (@ PIT) – Both Oracle Park and PNC Park are playing perfectly neutral the last three seasons, so the San Francisco Giants’ pitching staff isn’t gaining anything in that regard. But we can expect this anemic Pirates lineup to struggle mightily against left-handers Carlos Rodon and Alex Wood on Friday and Saturday.

The Pirates simply struggle to put anything together against lefties. Their .286 on-base percentage against them ranks 29th in the league and they strike out at the third-highest rate in the league (24.3%). As a team, the Pirates’ wRC+ is just 86 on the season, or 14% below league average. Pitchers with elite stuff like Rodon and Wood give the Pirates load of trouble, and they look like strong pitchers for your DFS squads. At $9,900, Rodon is the third-highest priced pitcher on DraftKings on Friday, but that’s still a salary I am willing to pay for this matchup.

Los Angeles Dodgers (vs. CLE) – Clayton Kershaw should pitch again this weekend for just the second time since coming back from injury, which will give the Dodgers an all left-handed rotation against the Cleveland Guardians at home. That’s bad news for Cleveland considering how they have performed against southpaws this year.

On the season, the Guardians have a .653 OPS against left-handers, which ranks 27th in the majors. They will turn Jose Ramirez around to his weaker side all series and it neutralizes Josh Naylor’s lefty power bat. Right-handers at the top of the order like Myles Straw and Amed Rosario have contributed no power (one combined home run) and only mediocre on-base percentage numbers. Kershaw and Julio Urias deserve long looks this weekend in their home starts.

Brendan Donovan and Nolan Gorman (UTIL/2B, STL) – The Cardinals get one of the largest swings in park factors that a team can have this weekend when they leave Busch Stadium and its 27th-ranked offensive rating to travel to Fenway Park, which ranks third. Even better for lefty like Donovan and Gorman who should have reasonable salaries, the Cardinals will see three straight righties, including two in Michael Wacha and Kutter Crawford who are extremely hittable.

In addition, Fenway Park gets a huge boost to left-handers for runs and hits, ranking 19% and 14% above league average. The Pesky Pole and wonky right field suppress home run power, but that’s not what we are banking on from Donovan and Gorman anyway. A Cardinals’ mini stack might be a nice cheap way to round out your lineups on Friday and Saturday. It gets tougher with all-of-a-sudden ace Nick Pivetta on Sunday.

Jeffrey Springs (SP, TBR) – The Baltimore Orioles are just quite bad generally, but are extremely bad against talented left-handed pitchers. The Baltimore lineup ranks 25th in slugging percentage against lefties, and they have the second-highest strikeout rate in the league against them as well (25.5%).

Springs is now pitching between five and six innings every start as the Rays are confident he is stretched out to well above 80 pitches. He has struck out at least five batters in five straight games and has allowed just four earned runs in his last six starts. But the best part about Springs this season has been the low 2.17 walk rate; easily the best of his career. Armed with a strong 14.2% swinging-strike rate this year, Springs should be able to blow through this lineup with ease.