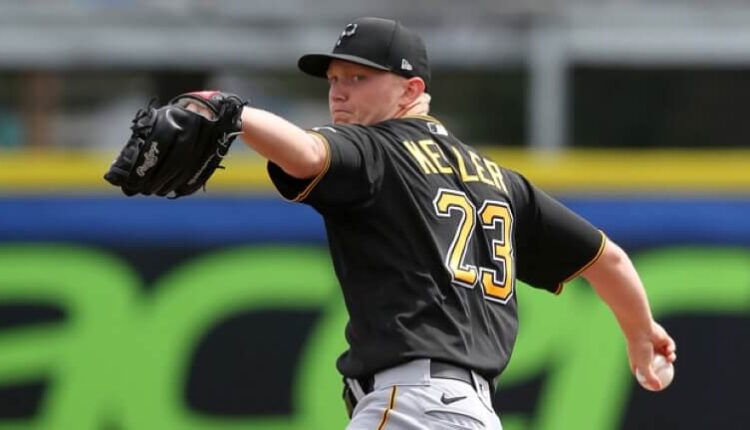 Mitch Keller, the once hyped prospect, has struggled in his 69.2 Major League innings. Finally exhausting prospect eligibility, Keller’s rookie days are behind him. As a prospect, Keller ranked as high as 12th on Baseball America’s prospect rankings in 2018. Other services had him as a top 20 prospect. After posting a 3.12 ERA over 539.1 innings in the Minors, his Major League ERA sits at 5.81. Can Keller overcome the struggles and turn into a serviceable MLB starter? Let’s dive into his profile.

Who Is Mitch Keller?

As previously mentioned, Mitch Keller was a dominant pitcher in his time in the Minor Leagues. He had the makeup and pedigree that led many to believe he could be a potential front line starter. Keller pitched 539.1 innings in the Minor Leagues while posting a 3.12 ERA, a 1.155 WHIP, and 566 strikeouts. All very impressive numbers. He also posted a 7.6 percent walk rate versus a 25.5 percent strikeout rate.

Mitch Keller consistently performed at a high level in the Minor Leagues with all the tools to make him successful at the big league level. His fastball was consistently graded as an above-average pitch that had great velocity, and he commanded well. Keller’s slider was arguably his best and graded out as plus by many scouts. An above-average curveball gave Keller three above-average or better offerings to go along with an improving changeup. Some of those pitches have translated well to the MLB level, while others have not.

Mitch Keller also had great command on his pitches. His walk rate was never stellar, but he did command pitches well. Obviously, some things have not translated to the MLB well for Keller. It is a small sample, though, compared to his scouting grades and performance in the Minors. Let’s take a deeper look into his Major League performance and see what we can expect from Keller in 2021 and beyond.

It has been quite the tale of two seasons for Mitch Keller despite the small sample size. In 2019, Keller posted a 7.13 ERA, but FIP and SIERA both suggested he pitched much better. This was likely due to an extremely high BABIP(.475) and a meager strand rate(59.6%). In 2020, things were exactly the opposite. Keller posted a 2.91 ERA, but his FIP and SIERA were high because of his .104 BABIP and 93.8 percent strand rate.

Split the two extreme seasons, and you have a career ERA of 5.81 in 69.2 innings of Keller. Far from impressive, but also the sample is still small. This season, Keller missed 43 days due to an oblique injury but came back strong to finish the year. His first start back lasted just three innings. But over his last two starts of the season, Mitch Keller posted 11 innings of one-run ball, but with a weird caveat. He had an eight walk game in his final start. How do you possibly pitch five innings of one-run ball with eight walks? For this reason, Mitch Keller is an interesting enigma. What can we make of him? Let’s look deeper into his profile.

Mitch Keller’s strikeout rate took a nice dip in 2020 by over ten percent. This was very uncharacteristic of Keller and likely to be an outlier for his career. The cause was the lack of ability to miss bats. His swinging-strike rate was one of the worst in the league at 7.4 percent. This was also an outlier for Keller’s professional career. He historically sat between ten and 13 percent during his time in the Minors.

He also saw his CSW(Called plus swinging-strike rate) drop significantly. He was already below average in 2019 but saw it drop even further in 2020. He also posted high zone contact rates in both 2019 and 2020.

I expect Mitch Keller to rebound and settle in nicely moving forward. He has historically been a solid strikeout pitcher, and there is no reason to believe he will lose that ability in the Majors. I believe he can be a pitcher who posts 25-to-28 percent strikeout rates throughout his career.

It is interesting to look at this table and see a 20.7 percent walk rate from Mitch Keller. A pitcher known for command in the MILB struggled and posted a higher walk than strikeout rate. But, remember the small sample and remember Keller posted an eight walk start. If you take that start out, it drops Keller’s walk rate to a 15 percent rate, which is still atrocious.

Much of Mitch Keller’s walk problem stemmed from being able to throw strikes (DUH!). I know it’s quite obvious, but still, Keller pitched in the zone just 36.6 percent of the time, which is well below average. He also fell behind in counts early with just a 46 percent first strike percentage. That mark was fifth worth among 323 pitchers who threw 20 or more innings. Keller’s O-Swing percentage was also meager, at 23.8 percent. This means he was failing to fool batters on pitches out of the zone.

Take it for what it is; Mitch Keller failed to pitch in the zone and get swings out of the zone. The walk rate is extremely concerning, but remember it was a small sample. Alex Chamberlain has a metric titled deserved walk rate. Keller actually had a deserved walk rate of 13.6 percent, which is a huge drop. This metric has a pretty strong correlation with future success, so I wouldn’t dwell much on Keller’s poor 22 innings in 2020.

Throughout his Minor League career, Mitch Keller posted ground ball rates across the board but averaged over 40 percent. That is a healthy ground ball rate. Keller’s 2020 batted ball profile is quite wonky due to the small sample. But overall, for his MLB career, he has posted a groundball rate slightly above 40 percent. He also does a good job of limiting line drives for his career, which end up as hits more often than not.

It is hard to judge Keller on his MLB batted ball sample, though. 69 innings is a tiny sample, and most of these numbers have not had time to stabilize. But it is worth looking at the larger picture. Overall, nothing stands out here, though, as Keller appears average in most of these numbers for his professional career.

Looking at Mitch Keller’s pitch mix is an important factor. His changeup was always his suspect pitch as a prospect, so it is encouraging to see him nearly quit using it. Notably, Keller lost both velocity and spin on all pitches in 2020. Was it just an outlier because of the small sample? Did Keller’s injury factor into this? These things are worth monitoring moving forward, but it is hard to peg a reason for right now.

I was hoping to see more of a pitch mix change in Keller after the Pirates hired a new pitching coach in Oscar Marin. Former pitching coach Ray Searage brought a fastball heavy approach that did not work well for many Pirates pitchers. Just look at all the former Pirates pitchers who have found success elsewhere. With time, I hope Oscar Marin can have a positive impact on Mitch Keller.

Keller did drop his fastball usage, but not significantly. He still threw it 55.7 percent of the time in 2020. It would have been interesting to see how that would have played out over a full season. Regardless, I am excited to see what Mitch Keller does with his pitch mix in 2021 and if his velocity is back up.

Mitch Keller’s slider is his best pitch. Again, remember the small sample, but in Keller’s MLB career, he has allowed just seven base hits on the slider, including zero in 2020. This pitch gets by far the highest whiff rate of any of his pitches at 47.8 percent in 2019 and 37.5 percent in 2020. You can make an argument that Keller should throw it more often than he does at 22 percent.

I previously mentioned that I thought Keller relied on his four-seam fastball too much. It was by far his worst pitch in 2019, having a .461 batting average against. It also only produced a 17.6 percent whiff rate. Interestingly enough, despite the lowered velocity, Keller had a .184 batting average against and a .244 xBA. He also saw an increased whiff rate on the four-seam to 18.2 percent.

Mitch Keller’s four-seam velocity will be something to monitor in the spring. If he can push back up in the 95-to-96 range with the strides he made on the pitch in 2020; his fastball can be highly effective.

Mitch Keller’s curve is a high spinning pitch that saw a large drop in average pitch velocity in 2020. It is hard to fathom why Keller lost three mph in average pitch velocity. This pitch also lost significant spin like Keller’s other pitches, which is a weird trend. His curveball has the potential to be a big strikeout pitch, as it produced a 34 percent whiff rate in 2019. That number dropped to 13 percent in 2020, but Mitch Keller’s curve has the potential to be an above-average offering.

Mitch Keller suffered the first significant injury of his career in 2020. An oblique injury caused him to land on the Injured List and miss 43 days of the 2020 season. The good news is Keller came back strong to finish the season and has six months to fully recover and be healthy for Spring Training. Hopefully, his velocity will be back up, and he will be full strength.

In Justin Mason’s TGFBI #2EarlyMocks, Mitch Keller was selected at an average pick of 277.6 between nine leagues. His highest pick was 191, while his lowest was 396. It is apparent people are struggling to figure out how to value him. If that ADP sticks, Keller is worth the price for his upside.

Right now, I have Mitch Keller projected for 135 innings pitched with a 4.25 ERA, a 1.28 WHIP, and 130 strikeouts. The biggest struggle is projecting innings pitched for a pitcher who only threw 21.2 innings in the previous season. There is upside for Keller to potentially breakout in 2021, but I am not ready to label him with that tag.

I want to answer several questions before I project Keller as a potential breakout pick in 2021. First, is his velocity back up in Spring Training? Does he appear fully healthy? Finally, are his spin rates back up?

Yes, his MLB sample has been rough, but the upside is there for Mitch Keller. Based on his long track record in the Minors, there are plenty of reasons to believe that Keller can be a successful MLB pitcher. He lacks the strikeout upside to be a true front-line starter, but Keller has SP2 potential. There is work to do in Keller refining his arsenal, but there is still a lot to like in Mitch Keller in dynasty leagues.

I would actually look to buy low on Keller in a dynasty league. He has steadily dropped in dynasty rankings around the industry. Dynasty leagues are about long term investments and buying and selling players at the right time. Now could be the time to buy while his value is low.

Thanks for taking the time to read. If you have further questions about Mitch Keller or any other pitcher that I have deep dived, feel free to reach out on Twitter @RotoClegg. I will be more than happy to discuss or answer any Fantasy Baseball questions.

Wondering how to evaluate pitchers through statcast data? Check out my latest piece and find out if statcast data is useful when looking at pitchers.

Brandon Woodruff: An ace you can believe in