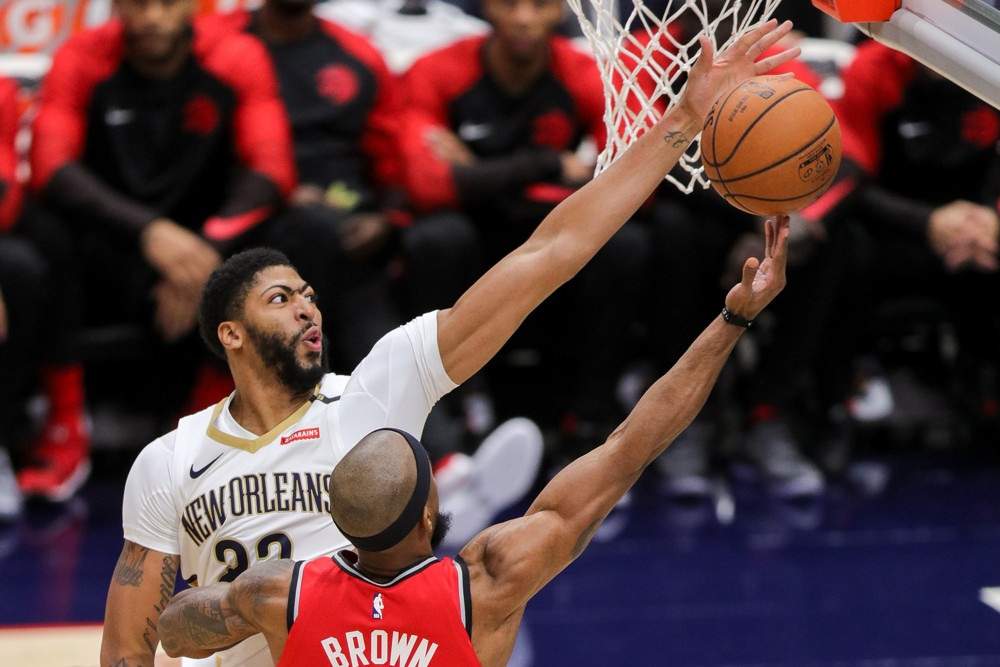 The NBA season has reached its halfway point meaning most fantasy teams have now faced each other at least once. Everyone has a grasp on their team’s strengths and weaknesses as well as the vulnerabilities of their opposition. To mark the midway point, I’ll take a look at a few players that have stood out across the first 40 games. The rankings are based on their 9-category numbers across standard 12-team leagues. I present to you my 2019 Midseason Fantasy Basketball awards.

For any fantasy basketball related questions, feel free to ask me on twitter @adamking91.

Davis has picked right up where he left off last season and is currently the number one ranked player in fantasy. His numbers are eerily similar across the board with a couple of noticeable differences. The biggest improvement has been his assist numbers which he has taken from 2.3apg to 4.4apg. While that doesn’t seem like a huge increase, it does take his assists from a being a negative stat to a positive stat resulting in a boost to his overall value.

Looking forward and there is no reason to think Davis can’t maintain these lofty numbers. His free-throw percentage is down from last season and so there is scope to even improve slightly. Nikola Mirotic will soon return to the lineup which could have an impact on Davis’ rebounding numbers. However, he will likely finish the season as the number one player barring any major injuries.

Much like Davis, Harden’s production has seemingly mirrored that from 2017-18. With Chris Paul spending significant time on the sidelines, Harden has had to take on more responsibility, especially on the offensive end of the floor. Therefore, his scoring has jumped from 30.4ppg to 33.7ppg despite a drop in efficiency of about 1.5 percent. With the jump in his usage, his turnover rate has increased quite significantly, going from 4.4topg to 5.6topg.

Chris Paul will eventually return to the floor which will likely mean Harden will not be putting up the numbers he has over the past few weeks. That being said, he is still almost certainly going to finish the season as a top-3 fantasy player. Those who drafted Harden would have likely taken him with an early first-round pick and should be very satisfied with their investment.

Curry has already missed a lengthy period of time due to injury, but when on the floor he has been magnificent. His scoring is up almost 2.5ppg when compared to last season due largely to the fact he is hitting 5.0 triples every game. That number is up from 4.2 last season and demonstrates his ability to develop and grow, even at this stage of his career.

The only thing that will stop Curry from living up to expectations would be another injury. The Warriors are typically very careful with their players, often affording extra time to recover. People with Curry on their roster will simply have to hope that he has had his share of injuries for the season and can maintain his health moving forward.

In arguably the most talked about trade of the off-season, Leonard headed north to join the Raptors. There was some concern around his health heading into the season and justifiably so, however, those fears were soon laid to rest with Leonard appearing to seamlessly integrate himself into the Raptors culture. He is currently the fourth-ranked player and demonstrates very few weaknesses in his fantasy game.

Looking forward, the hope is that he is cleared to play back-to-back sets in the near future. The Raptors are going to be pushing for the best record in the NBA for the second straight season meaning Leonard should see plenty of run, even at the back end of the campaign. Those who drafted him may have lucked out due to the hesitation of others. He was being drafted towards the end of the first round in many drafts, clearly making him a high reward selection.

Perhaps the biggest surprise member of the team is Paul George who finished last season as the 16th ranked player. Much like Leonard, George was likely available on the turn or even as an early second round pick. He has surpassed even his biggest fans expectations and has topped his numbers from last season in every category available. The loss of Carmelo Anthony has undoubtedly helped George and the Thunder as a unit. George is now the primary scorer for the Thunder, something that would have been though improbable only 12 months ago.

George’s numbers are unlikely to increase across the back half of the season given the improvements he has already made. He should finish the season as a top-10 player but will have players such as LeBron James, Karl-Anthony Towns and Giannis Antetokounmpo breathing down his neck.

Rookie of the Year

The hype around Ayton built furiously leading up to draft time, eventually leading people to have to use a fourth-round pick to secure his services. He began the season strongly but appeared to hit a rookie wall only one month ago. Since then, however, he has turned things around and over the past month is the 16th ranked player. Despite the same playing time, he has increased his numbers across the board, most importantly on the defensive end.

Ayton will likely go through another period of poor production at some stage which could impact his overall value. He is the 28th ranked player as of right now and that would appear to be his ceiling unless he manages to find another gear post-all-star break.

Sixth Man of the Year

Harrell finished the 2017-18 season as the 190th ranked player, however, was the 139th ranked player over the final two weeks. The Clippers lost DeAndre Jordan in the offseason which appeared to leave Harrell as the first-choice center. The acquisition of Marcin Gortat soon put those hopes on ice and certainly pushed him down many draft boards. Those who took a risk on him were soon rewarded for their savvy selection as Harrell established himself as the closing center.

He continues to come off the bench no matter the matchup but has not let that impact his career-high production across the board. He is currently the 71st ranked player in just 25mpg. His ceiling is capped by the fact his playing time is somewhat limited, but he should remain a solid top 80 player moving forward.

Siakam has been a revelation for the Raptors after starting the season with a 20 minute per night role. Even the bravest of Raptor fans could not have expected Siakam to develop his game this quickly. He is the 41st ranked player across the first 41 games, an improvement of 147 spots on where he finished last season. Most importantly, his numbers are up across the board and he is now consistently playing 35mpg.

His efficiency has dropped slightly after his red-hot start, yet he still sits at 57.6 percent for the season. He continues to improve aspects of his game on a nightly basis and the speed at which he has developed would indicate there is still room to grow. Top 40 is likely his ceiling for this season, but given he was available on a number of waivers early in the season, the return on investment is already substantial.

Got a question about the fantasy basketball mid-season awards? Hit Adam up on twitter @adamking91 or give a shout out to @Fantrax