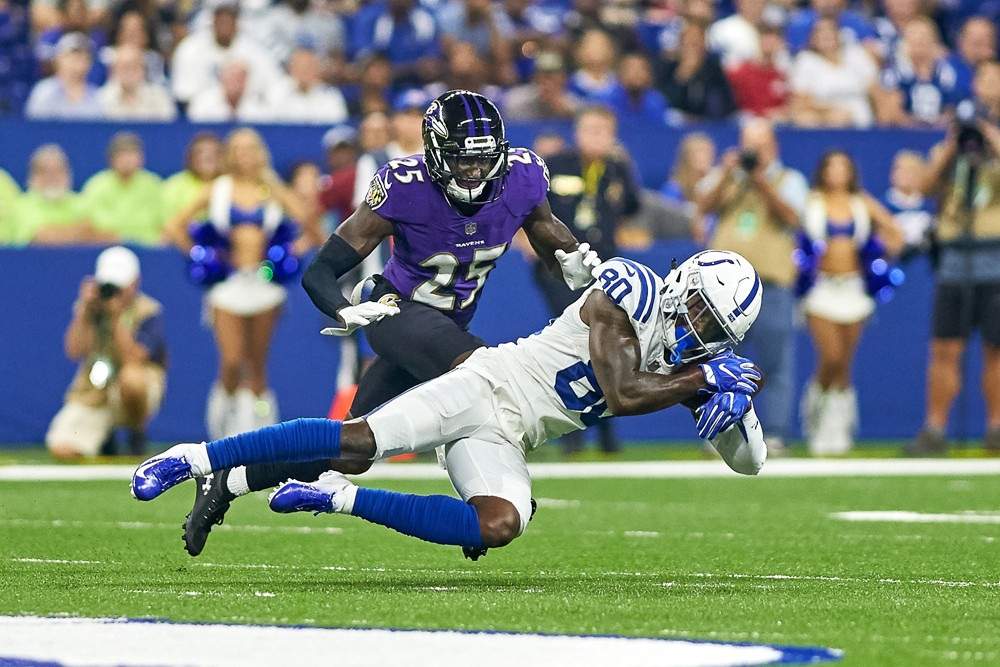 Ladies and gentlemen, it is Mick’s Pick Six time. This is a weekly look at some of my favorite streamers at each position. Before I begin, I feel like I have to point out that many of the names on this list are quite low in my weekly rankings. Looking back, it appears I was a bit optimistic on several injury situations earlier in the week. As practice reports come out and news develops throughout the week, opinions and rankings are subject to change. That is why it is so important to keep up to date on the latest information. In any event, here are my Week 6 streamers.

Sitting at the top of week 6 streamers is Jameis Winston. Winston served a three-game suspension to begin the year and watched as Ryan Fitzpatrick became the first quarterback in NFL history to throw for at least 400 yards in three consecutive games. The FitzMagic wore off in Week 4, and head coach Dirk Koetter named Winston the club’s Week 6 starter. The former overall top pick in the NFL Draft makes his first start of the 2018 season when Tampa Bay heads to Atlanta to take on the Falcons.

For those concerned that Tampa’s recent aerial assault was merely a result of Fitzpatrick’s aggressiveness, it should be noted that Winston averaged 8.6 yards per attempt and over 300 yards per game in five December 2017 games. Winston will not be afraid to attack an Atlanta defense which has been gutted by injuries and is not likely to be able to stop Tampa Bay’s array of weapons in the receiving game.

Atlanta has been a dream matchup for enemy signal callers this year. The Falcons have allowed four consecutive quarterbacks to throw for three touchdowns against them. Those four quarterbacks have averaged a shade under 330 passing yards per game during that stretch. This game features the second-highest Vegas total and Winston will have plenty of chances to put up numbers. While it remains to be seen whether the Bucs can eat the W, Winston should feast in this matchup. Winston is active in just 30 percent of Fantrax leagues but has top-five fantasy upside in Week 6.

Though there has been recent optimism regarding the health of San Francisco running back Matt Breida, I do not believe he will play in this game. This leaves Alfred Morris in position to absorb all the rushing opportunity in the 49ers’ backfield this week. Alf saw 21 touches last week and would likely see a similar workload were Breida to sit out. Volume is king, and Morris should have plenty of it in a Week 6 Monday night matchup in Green Bay.

I expect Morris to get lots of work early in an attempt to keep this game close and reduce exposure to quarterback C.J. Beathard. Beathard is mistake prone and would obviously not fare well trying to match production with Aaron Rodgers. Green Bay ranks in the middle of the pack in rushing defense, but their 4.43 yards per carry allowed to opposing running backs suggests some vulnerability. Alfred Morris is still available in over a third of leagues and is active in just 25 percent of leagues. I believe he is at the very least a Week 6 Flex play and is likely to exceed that threshold and earn an RB2 finish.

There are eight wide receivers who have been targeted at least 10 times in each of the last two weeks. The list is full of elite wideouts like Antonio Brown, DeAndre Hopkins, Odell Beckham, Davante Adams, Jarvis Landry, Adam Thielen, and Stefon Diggs. The eighth name on the list? Chester Rogers. Rogers is likely to receive a healthy dose of targets once again this week in a 6 matchup against the New York Jets.

Top pass catchers T.Y. Hilton and Jack Doyle have already been ruled out for this game. The Colts have little to offer in the running game and Andrew Luck is on a record pace for pass attempts through five weeks. All of this means that Rogers should continue to be targeted with great frequency in this game. Furthermore, slot cornerback Buster Skrine is out with a concussion. The Jets have already had plenty of issues defending the slot even with Skrine available. Rogers is still available in a whopping 74 percent of leagues and is currently active in just 12 percent. He is a prime streaming candidate in all formats, but he should really be an asset in PPR leagues. Chester Rogers is one of my favorite Week 6 streamers.

C.J. Uzomah will likely be the top tight end in Cincinnati for the remainder of the 2018 season following the gruesome injury to Tyler Eifert. Last week, Uzomah was in on 92 percent of snaps but only saw two targets. Uzomah’s snap rate should remain high with Tyler Kroft out this week, and I expect his target share to follow suit. The fourth-year player out of Auburn has a prime matchup against the Pittsburgh Steelers.

Pittsburgh’s defense is one to target for those steaming tight ends each week. Despite their improved effort overall last week, the Steelers once again failed to adequately defend the tight end position. Austin Hooper led the Falcons last week with nine grabs for 77 yards. That is becoming the norm against Pittsburgh these days. In their last four games, opposing tight ends have caught 36 passes against the Steelers. C.J. Uzomah is still available in 76 percent of leagues. That number is far too high as Uzomah has top-ten upside in this potential shootout. I think Uzomah is an excellent streaming choice this week.

We all know that kickers are a wasteland in fantasy football. In what is essentially a hobby rooted in predictions, kickers are a nightmare. Just when you think you have the opportunity component of choosing a kicker nailed, Mason Crosby inexplicably misses five kicks in one game. In a dome. Seriously, kickers are awful. Having said that, Cairo Santos is the ultimate Week 6 streamer at the dreaded kicker position.

Santos is still subbing for Greg Zuerlein, who is reportedly getting close to returning for the Los Angeles Rams. The former Kansas City Chief not only gets the benefit of kicking for an elite offense in Zuerlein’s absence, but he also gets the added bonus of kicking in the thin air of Denver this week. Talk about a win-win. Cairo Santos is owned in just ten percent of leagues. He is an ideal fit for those streaming kickers, and also for fantasy owners who have Wil Lutz or Matt Prater facing a Week 6 bye. Santos should be a top-five option this week.

I am going a bit unconventional with my D/ST unit this week. I am taking the Dallas Cowboys, who are an underdog this week against the Jacksonville Jaguars. That is not usually something I like to do. My selection boils down to a couple of factors. First, Dallas plays at a very slow pace. This leads to low scoring affairs, which is a good thing when targeting defenses. Dallas has yet to allow more than 24 points in a single game this season. No other team who has played all five weeks can make that claim. This week’s game against the Jaguars has a 40-point Vegas total, the lowest on this week’s slate.

The other reason is Blake Bortles. Bortles has shown flashes this season, but he has also been wildly inconsistent. He turned the ball over five times last week against Kansas City. Prior to last week, the Chiefs had been a target for opposing quarterbacks. There is a reasonable chance that “bad Blake” shows up on Sunday in Big D. Dallas’ D/ST is owned in just 39 percent of leagues and being started in just 24 percent. The Cowboys have a solid fantasy floor and a potentially high ceiling as well in this matchup.

Last week I introduced the Extra Point that will accompany my Pick Six streamers. The Extra Point will be a bit of a deeper dive for those looking to catch lightning in a bottle. With bye weeks upon us and injuries taking a toll, these fliers can be very useful under the right conditions. We saw this play out last week with Marquez Valdes-Scantling of the Green Bay Packers. The rookie wideout was just 14 percent owned and 2 percent active yet posted the week’s WR16 finish in standard leagues. While that return on investment is not likely every week, it proves that there are plenty of diamonds in the rough in any given week. This week, I am taking a look at running back Ito Smith of the Atlanta Falcons.

The fourth-round rookie out of Southern Miss posted numbers in college that rivaled Saquon Barkley’s. But Smith was not invited to the NFL combine, as most cited his inferior competition for his inflated numbers. Smith is also a bit undersized and is not an elite athlete. However, he does have plenty of experience and is a very capable pass catcher. Smith may never be a featured NFL running back, but he can certainly make a name for himself as a satellite back in today’s NFL.

Devonta Freeman is unlikely to suit up for the Atlanta Falcons in Week 6 due to a foot injury. Injuries are beginning to pile up for Freeman, who sat out Weeks 2-4. During those three games, Ito Smith was the primary backup to Tevin Coleman. Smith averaged 45.7 yards per scrimmage during that time. Those numbers do not jump off the page, but he did score a touchdown in Week 4, earning an RB2 finish. That is among the range of outcomes this week for Smith in Atlanta’s likely shootout with the Tampa Bay Buccaneers.

Tampa Bay really struggles against pass-catching running backs. The Bucs have already allowed 328 receiving yards and two receiving scores to opposing running backs. Considering they had a bye week last week, this really stands out as an area where Smith can do damage. Smith is only owned in 21 percent of leagues and is currently being started in just three percent. In a week where there are a number of high-profile running backs who are either dinged up or sitting due to a bye week, Ito Smith makes for a very intriguing Week 6 streamer in deeper leagues.