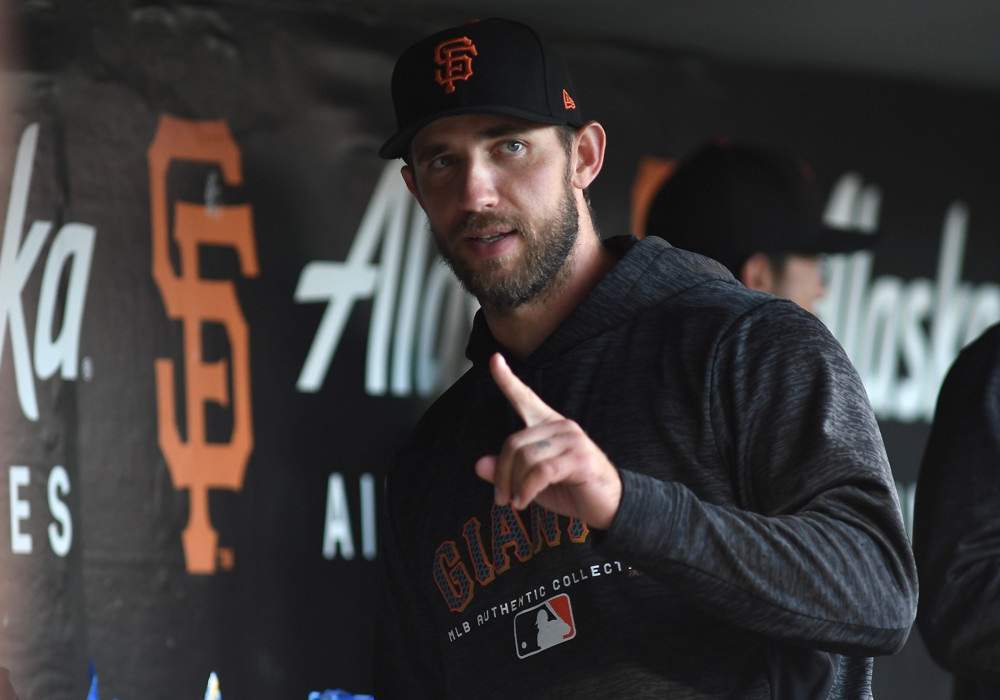 This is a series based on outliers. It’s hard to imagine more of an outlier injury than “ATV accident”, yet that’s exactly what cost Madison Bumgarner nearly half of the 2017 season. He also missed a big chunk of time in 2018 with a fractured metacarpal. Clearly, these are fluke injuries, but we’ve also seen some decline from Bummy. It’s time to take a step back and re-evaluate what our expectations should be.

What To Expect from Madison Bumgarner

For nearly a decade, our expectations for Madison Bumgarner have been simple: ace production. From 2011-2016, the tall lefty delivered 200-plus innings, an ERA between 2.74-3.37, and 190-plus strikeouts. Consistent, elite production gave us no reason to think he should be drafted as anything other than a frontline starter. However, we’re about to get into a pretty serious decline in production. His (extremely) early ADP from Justin Mason’s 2 Early Mock’s (results can be found here) have Bumgarner as the 62nd player off the board, SP18. Is he still a top-20 starter?

Enough with the questions! Let’s find some answers. Just a cursory glance at his strikeout and walk numbers are immediately troubling. 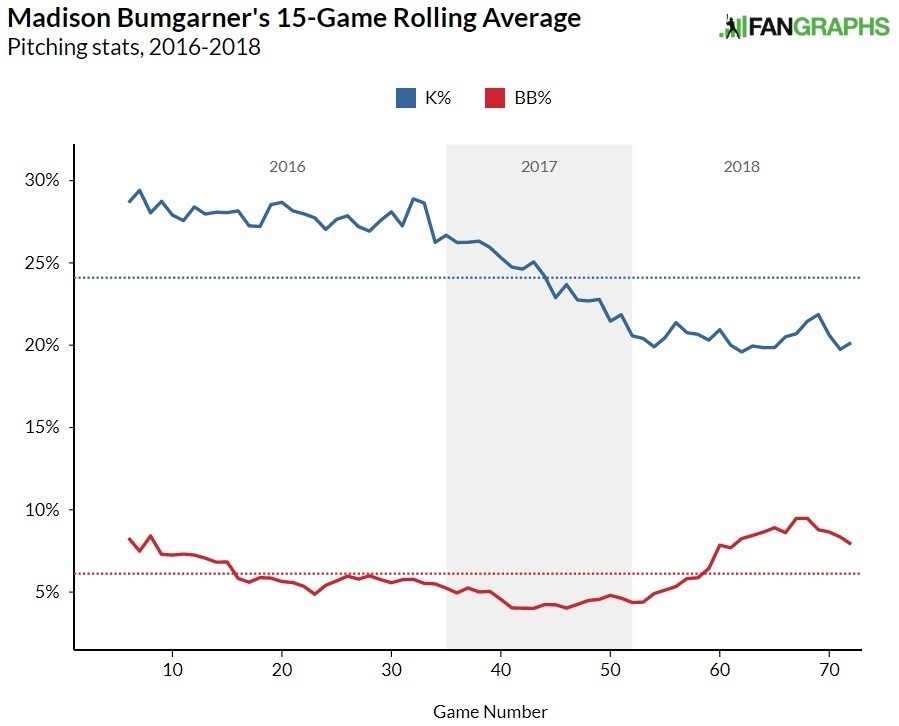 2016 was the last year of the classic Madison Bumgarner production, so we’ll base the most recent season against that year. Not only has Bummy’s strikeout rate dropped from 27.5% to 19.8%, but his walks have also jumped from 5.9% to 7.8%. Let’s focus on the drop in strikeouts first. The main culprit here is the decline of his fastball. 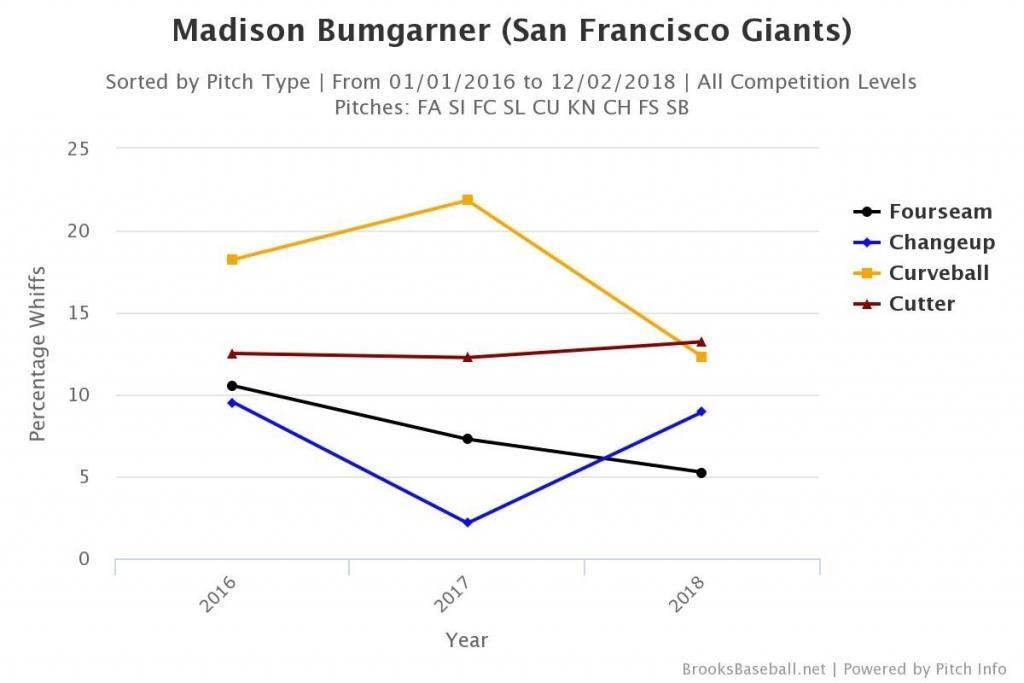 The whiff rate on his four-seam has been cut in half since 2016, falling from 10.53% to just 5.26% in 2018. Noted brisket diplomat and NFBC Main Event extraordinaire (also co-host of Fantrax’s Launch Angle podcast) Rob Silver pointed out in a rare snark-less tweet that his fastball is, indeed, not good.

Of the 176 starting pitchers who threw 200+ fourseamers in 2018, Madison Bumgarner’s fastball had a WHIFF rate at the 13th percentile.

The pitcher just above him? Felix Hernandez

The pitcher just after him? Brett Anderson.

He isn’t who you think he is anymore.

It’s almost as though Madison Bumgarner is aware of his own results (that was snark). He’s dropped the use of his fastball from 48% in 2016 to 34%  last season. He’s leaned more into the use of his offspeed stuff, increasing the usage of his curveball and changeup by 10%.

Mysteriously enough, with the increased use of his curveball, its whiff rate dipped. The whiff rate on his curve fell 9% to 12.31% in 2018, although by the batted ball results it was still effective. The pitch yielded a .187 BAA with a .228 SLG and 54% ground balls. I’m not too worried about the whiff rate with those kinds of results, and his 1.69 pVAL on the curve was actually the second best of his career. His cutter has remained a very effective weapon throughout all this and is still one of the best cutters in the league. His changeup continues to change up and is a fine fourth pitch.

The aforementioned walk rate did spike a year ago, and there are some reasons for that. His first-pitch strike rate fell to 63.7%, his lowest mark since 2012, and overall he was in the zone less than he has been since 2013. If you don’t have as much confidence in your stuff, it’s harder to feel good about pumping strikes. Additionally, opposing batters didn’t swing at Bumgarner’s pitches outside the zone as much, with his O-swing% dipping to 30.8%, his lowest mark since 2013. It doesn’t inspire confidence, either, when you’re getting knocked around harder than you used to. 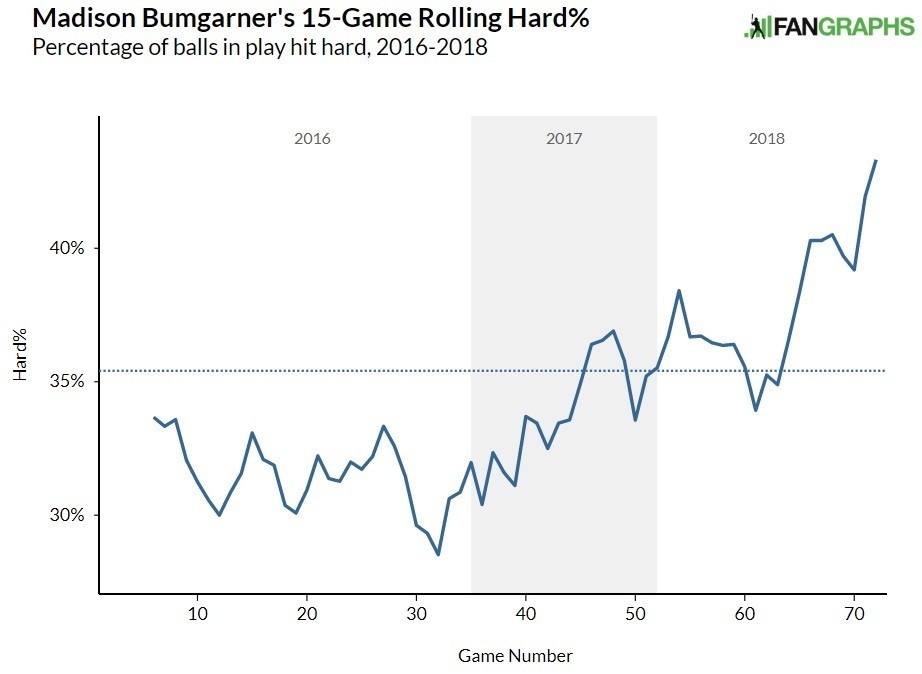 Piecing It All Together

All of this together sounds like a great big stack of negativity. While it’s not good, it’s not the end of the world as long as you set your expectations properly. Madison Bumgarner’s 12% K-BB% could rebound to the MLB average 13.8% pretty easily. If he avoids another fluke injury, he should get back to the 180-200 inning mark. Even with a diminished K%, the volume will help him pile up strikeouts.

Racking up quality starts won’t be a problem, but in standard roto, you’re looking for wins. Wins are going to be an issue for the Giants in 2019. Granted, that stat is as fluky as you can find in fantasy, but he’s got just 10 wins in his last 38 starts. Odds are, he’s not netting you 15-plus wins unless he gets traded. Along those lines (but more positively), as long as he is pitching half his games at AT&T, he’ll be aided by the pitcher-friendly home park. Last season he put up a 1.63 ERA at home (10 GS) compared to a 4.97 ERA on the road (11 GS).

He’s fine. He’s okay! He’s solid. He’s just not an ace. For 2019, Steamer astutely projects Madison Bumgarner for a 3.93 ERA, right in line with his 3.95 and 3.99 FIP from 2017-18. The league average ERA in 2018 was 4.15, so that projection is even above average! Hot diggity. Does that make him a top-20 starting pitcher? Not for me. He’s closer to SP30 for me, with names like Walker Buehler, Mike Clevinger, Jameson Taillon, and German Marquez among a few taken after Bumgarner in those 2 Early Mocks that interest me more.