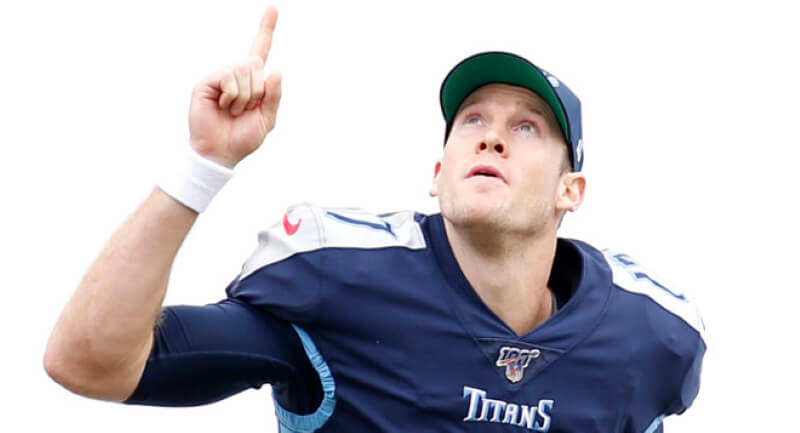 Imagine if you will that it’s round two of your draft. You’re feeling good about your first pick and you’re looking to close out the first two rounds on a high note. There’s a player on your board that has your eyes wider than the Grand Canyon. All you need is the owner ahead of you to take someone other than your stud guy. Ten seconds are left on the clock, and then it happens. Lamar Jackson goes off the board, and at the top of your queue is the coveted player you desperately wanted. While you’re loading up on stars receivers and running backs, your league mates are clamoring to get Jackson or Patrick Mahomes. Your skill positions are stacked, and meanwhile, those who took early quarterbacks are merely playing catch up. Instead, you take a late-round quarterback and subsequently drooled of your team post-draft.

This article isn’t meant to demean players like Mahomes and Jackson. They’re fantasy superstars, and at the right price, they can be difference-makers for your team. In all likelihood, however, the price you’ll have to spend to draft these guys will put you at a deficit at other positions. Why put your entire lineup at risk when you can easily draft a combination of late-round quarterbacks, that combined, can produce QB1 numbers? Successfully executing the pairing of two late-round quarterbacks can give you the edge your team needs to reign supreme over your opponents. With my help, you’re going to have a leg up on the rest of the competition. So, without further adieu, let’s dive into my list of late-round quarterbacks that are going to win you your draft.

I have to come clean. The reason I’m addressing Ben Roethlisberger before everyone else on my list is because of the recent shaving of his exiled mountain-man beard. Watching him sling passes to JuJu Smith-Schuster was everything we need to see to get hyped for the upcoming season. Big Ben is coming off of a lost year that saw him exit in Week 2 with an elbow injury. Following his absence, his receiving options suffered greatly. After enduring the nightmare of catching passes from Mason Rudolph and Devlin Hodges, Pittsburgh’s receivers should be energized and ready to go.

Prior to his 2019 season on the sideline, Ben dazzled fantasy owners with a QB3 performance in 2018. While he’s not going to throw a staggering 675 passes again, he’s going to get this offense back on track. Some might ask, “Why would Pittsburgh lean on their passing game when they have an elite defense?” It’s a valid question. While it’s true that the Steelers’ defense upgraded from 2018, they were never as bad as some may think. Regardless, even with a crew of stout defenders, a heavy passing attack is part of Pittsburgh’s DNA.

Since 2013, Ben has yet to throw fewer than 561 passes in any season he’s played at least 15 games. Taking last year’s injury out of the equation, he’s only missed a total of six games in that timeframe. It would be foolish to completely disregard the events of last year, but Ben himself has said that he no longer feels pain when throwing the football. The Steelers are a well-run organization, and it’s noteworthy that they didn’t feel the need to address the quarterback position in free agency or the draft.

Roethlisberger is coming back to Pittsburgh with a slew of young weapons at his disposal. Not only is Smith-Schuster healthy and ready to go, but second-year player Diontae Johnson is looking to expand on his impressive 2019 rookie campaign. The fact that Johnson was able to thrive with Hodges and Rudolph speaks volumes to his talent. Accompanying Ben’s young receivers is the newly signed Eric Ebron and the returning veteran Vance McDonald. Ebron offers a steady red-zone presence that should allow Ben to capitalize on the mismatches Ebron will create near the goal line.

As far as late-round quarterbacks go, not many have had a top-three performance in the last two years. Ben is going to be on the majority of my teams, and hopefully, he’ll be on yours too.

The Titans’ second-half savior imposed his will against opposing defenses. Along with Derrick Henry and A.J. Brown, his offense reached a level of efficiency not many teams can replicate. Once Tannehill got the starting nod in Week 7, he didn’t look back. In his time as a starter, Tannehill blew up for a QB3 finish in that span of time. Yes, he’s due for regression, and he’s undoubtedly going to take a step back. Still, it’s worth asking, when you’re as efficient as Tannehill was, what does taking a step back look like?

Tennessee’s new franchise quarterback threw for an impressive line of 2,742 yards, 22 touchdowns, and only six interceptions. Adding to his 70.3% completion rating, Tannehill also ran for four touchdowns. Looking at his career prior to last season, Tannehill has a career completion percentage of 64%. Clearly, last year was an outlier. So, what do we make of the new and improved Tannehill? Well, there are two ways you can view the disparity between last season and the rest of his career. You can run with the narrative of last year being a fluke, or you can argue that he’s never been in a situation that’s allowed him to reach his full potential. Take a wild guess where I stand on the matter.

I mean no disrespect to Lamar Miller or Jay Ajayi, but their highest yardage totals were 1,099 and 1,272 yards respectively. Both of those rushing seasons were respectable performances, but they pale in comparison to Henry’s 1,540-yard season last year. Not only did Henry run laps around both backs in rushing yards, but he also doubled both of their career-high rushing touchdowns with 16 trips to the end-zone. When you have a commanding force like Henry in the backfield, defenses have no choice but to crowd the box. However, Henry didn’t see as many crowded boxes as you might expect last year. Through 16 games, he averaged 6.8 defenders in the box, making him 19th in that category among qualifying rushers. This year, however, defenses are going to have to adjust to keep this juggernaut at bay.

Another advantage of having a back like Henry is an offense’s ability to run play-action. This aspect of the passing game is one that Tannehill greatly excelled at. On the season, according to the Baltimore Sun, Tannehill had a passer rating of 143.6 when throwing play-action passes. Defenses will adjust now that they have sufficient tape of the Titans’ offense, but it will be impossible to fully shut down this part of Tannehill’s game.

Adding to Tannehill’s upside, along with rookie sensation, A.J. Brown, Jonnu Smith will be back in the mix as his starting tight end. One of Tannehill’s biggest strong suits is his accuracy on passes 20 yards and under. In all but one pocket of the field within that yard range, Tannehill threw for a passer rating of around 120. Both Brown and Smith are going to be big targets for Tannehill in this range, and both have the ability to take one to the house on any given reception. Throw in Tannehill’s high floor he gives you with his rushing ability, and he’s arguably the most appealing late-round quarterback in the draft.

Boy, did things go wrong for Los Angeles last season? 2019 did not go according to plan after a Super Bowl appearance just the year before. It seems that after Belichick exposed Sean McVay’s offense, the rest of the league did their homework. It was more than just a scheme revelation that did the Rams in though. Per Pro Football Focus, the Rams’ offensive line ranked as the 31st unit in the league. Goff’s pass protection gave up a 4% increase in their allowed pressure rate, and it showed in Goff’s panicked gameplay. What we now know is that Goff is not the franchise quarterback they paid him to be without a solid crew of pass-blockers in front of him. If Goff were in the hands of a lesser head coach, he wouldn’t be on this list.

Lucky us for all, McVay is hands down one of the most innovative offensive minds in the league. The young coach watched his team suffer mightily during the season, and although they didn’t make the playoffs, he demonstrated his ability to adjust on the fly. Realizing there wasn’t much he could do with his offensive line, McVay began to employ the use of two-tight end sets. Once Tyler Higbee joined Gerald Everett on the field more regularly, the offense began to pick up steam.

The lifeblood they gained with their new offensive play-scheme translated into Goff’s fantasy output. Through the first 12 weeks of the season, Goff’s dreadful performance earned him the QB21 spot in fantasy. Starting in Week 13, however, Goff was the QB6 the rest of the way. Half of Goff’s 22 touchdowns came in that stretch alone. Throughout this offseason, McVay and fellow Rams personnel have been vocal about the need to include both Everett and Higbee. Expect to see more of the same style of play carry over into 2020.

The big question fans are asking now is what the offense will look like without Todd Gurley. Believe it or not, Gurley’s departure may actually increase Goff’s upside. Gurley is a bonafide touchdown vulture in the Rams’ offense. Despite an entire season of inefficient running, Gurley managed to put together a double-digit touchdown performance. Without the former Offensive Player of the Year’s firm grip on the end-zone, Goff now has an opportunity to utilize his weapons and increase his touchdowns near the goal line. Sure, Goff won’t have Gurley to check the ball down to anymore, but Gurley lost a step as a receiver as well. In 2018, Gurley averaged 9.8 yards-per-catch before regressing to a paltry 6.9 last season. Needless to say, his presence won’t be missed.

With Goff’s inherent upside in a McVay led offense, you should feel confident rolling into the season with him on your roster.

All three of the guys I’ve listed are going to grant you the freedom to build a strong foundation of running backs and wide receivers. Covering your bases at these positions is a must. Remember, running backs are a hell of a lot harder to replace than quarterbacks. Don’t believe me? Get this. There were 40 quarterbacks that put up a top-12 performance at least once last season. Take a minute to digest that. 40 different quarterbacks! I fully believe that these three quarterbacks can be your starter for the majority of the season, but if quarterback becomes a need, you can always look to the waiver-wire for a competent replacement.

I hope you’ve enjoyed the information I’ve given you about my favorite late-round quarterbacks. As the offseason continues, we’ll continue to provide you with valuable information and strategies to dominate your league. If you missed out on my Late-Round Tight Ends To Draft For 2020 Fantasy Football article, click here!