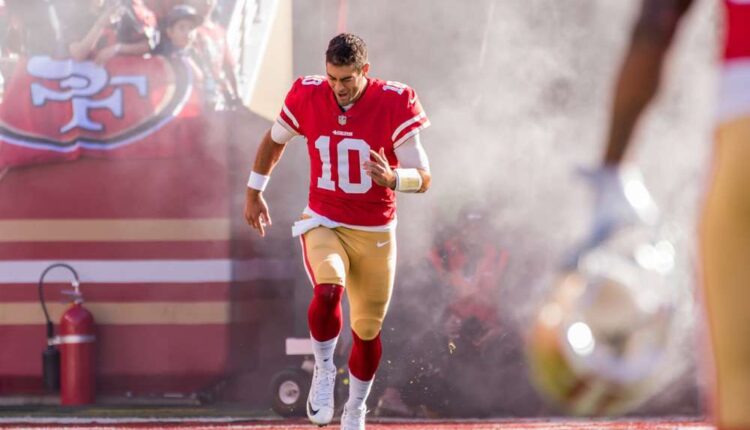 If you’ve read much of my fantasy work over the past decade or so, then you know I’ve long been an advocate of waiting to draft a starting quarterback. If you’ve you haven’t read much of my work, that’s OK—I won’t take it personally.

You know what? I changed my mind—taking it personally.

There. Now I feel better.

There’s logic behind this philosophy. Long story short, the depth at quarterback is so much better than at running back and wide receiver that the “edge” gained with an elite signal-caller isn’t worth the cost you pay at other positions. As often as not, those elite quarterbacks are coming off huge seasons that aren’t likely to be repeated anyway.

This isn’t to say that there’s never a point where drafting a high-end quarterback makes sense. If everyone in your league is patient at the position and the quarterbacks all drop, then spending a pick on Mahomes or Andrew Luck becomes more palatable. And obviously, Two-QB and Superflex leagues are another matter—in those leagues the relative value of quarterbacks is magnified exponentially by positional scarcity.

But in the vast majority of instances, I’m not going to be the first owner to draft a quarterback. Or the fifth. You wouldn’t find Peyton Manning or Aaron Rodgers on my teams in past years, and you won’t find Mahomes on my teams this year.

That’s not where the value is.

It’s become even more true the past few years. With the influx of young quarterbacks like Mahomes and Cleveland’s Baker Mayfield, there aren’t just quarterbacks ranked outside the top-10 who are more than capable of performing as weekly fantasy starters—there are players outside of QB1 territory in 12-team leagues altogether.

Each of the quarterbacks listed in this piece has a consensus ADP at Fantasy Pros (which includes ADP data here at Fantrax) well outside the top-15 quarterbacks. At worst, each has a very good chance to become a matchup option capable of being used in a platoon.

After signing a five-year, $137.5 million contract extension in February of 2018, Garoppolo made it just three weeks into the season before suffering a season-ending ACL tear. But as Jennifer Lee Chan reported for NBC Sports Bay Area, 49ers QB coach Shane Day has been impressed both with Garoppolo’s rehab and his command of Kyle Shanahan’s offense.

“I’ve been really encouraged by what I’ve seen,” Day said. “There’s a couple of aspects, one is coming back from the knee injury, which is kind of a work in progress that we are all communicating and working through which has all looked good. He’s right on pace with that. And then from a standpoint of playing quarterback, he’s working on some things technique wise, and kind of another time through with the offense. The first time he came here he started in the middle of the season, then he had an offseason, and then he was injured. So just getting back to those fundamentals and techniques to really play the position fast and he’s learning more knowledge about the offense, so he has a greater understanding of why Kyle (Shanahan) is calling plays. He’s been really good at all aspects of that.”

Garoppolo’s fantasy numbers weren’t great over those three games last year, although he did post a QB1 weekly finish in that truncated Week 3 matchup with the Kansas City Chiefs. But this year Garoppolo will have the advantages of another full offseason in Shanahan’s scheme and an improved array of passing-game weapons that include tailback Tevin Coleman and rookie wideouts Jalen Hurd and Deebo Samuel.

Garoppolo’s ADP was substantially higher a year ago at this time, and you can argue that his situation wasn’t as favorable. Maybe the Jimmy G hype was less misplaced and more mistimed. Same QB, different draft cost. That makes him one of my favorite fantasy sleepers of 2019.

Despite his modest asking price on draft day (or maybe because of it), Prescott does have some supporters in the fantasy community—including Michael Beller of Sports Illustrated.

“Prescott has been in the NFL three seasons, ranking seventh, eighth and 11th, respectively, in fantasy leagues.,” he wrote. “He has ranged between 3,324 and 3,885 passing yards, and 282 and 357 rushing yards. He has thrown for 23, 22 and 22 touchdowns, and rushed for six scores in all three of his years. In nine games with Amari Cooper last year, Prescott had a completion percentage of 71.3%, 2,468 yards, 7.71 yards per attempt, 14 touchdowns against four interceptions, and four more scores with his legs. He has never missed a start. Why is the fantasy community suddenly expecting him to fall all the way outside the top 20, a full 10 spots worse than he has ever been? Prescott’s ADP just doesn’t pass any level of scrutiny.”

The man has a point. Over his admittedly brief career, Prescott has never finished outside QB1 territory. He finally has an elite wide receiver at his disposal in Cooper, who came over in a midseason trade with the Oakland Raiders.

From Week 9 on last year (once Cooper joined the team and had a couple of weeks to acclimate) Prescott was eighth in fantasy points at the position. The Cowboys brought in veteran slot receiver Randall Cobb to replace Cole Beasley, and Jason Witten’s back after a year of butchering Monday Night Football. It’s not hard at all to imagine Prescott having the best statistical season of his career.

And yet he’s barely being drafted as a QB2 in 12-team leagues. Go figure. Not often are the fantasy sleepers we’re talking about already proven.

Carr’s first season with Jon Gruden at the helm the Raiders was a rough one—there were public criticisms from Gruden, reports that the Raiders had all but quit on the 28-year-old and even a bizarre challenge by Carr to fight ESPN’s Max Kellerman.

In fairness, who hasn’t wanted to fight the First Take guys at some point.

However, 2019 is a new year, and Carr insisted to reporters (via Bill Williamson of Forbes) that he and the rest of the Raiders are on the same page and that he was never worried the team might look to draft his replacement.

“To be honest with you,” Carr said, “the owner [Mark Davis], the [general manager Mike Mayock] the GM, the head coach and the quarterback, I don’t know about other places, but here, we’re all on the same page. I talk to all three of those guys all of the time. They tell me good, bad and ugly; we are always on the same page because that’s what our team needs. That’s what the good organizations do. So, from the beginning, I’ll say it this way, I met with all of them , talked with all of them, when I watched the draft there was like negative 47 percent chance that they were going to draft [a QB] in my mind. Hopefully those guys didn’t have their hopes up, but it wasn’t going to happen. They pretty much said that literally every time it came up, if it even came up. We’re not just planning for this year, I’m honestly going to be here a long time, so I hope that’s okay with you guys. You have to get used to me.”

Brave face aside, Carr knows as well as anyone that he needs to get things turned around and try to recapture his form from 2016, when he was 12-3 as Oakland’s starter. Carr did throw for a career-high 4,049 yards in 2018,and with the additions of wide receivers Antonio Brown and Tyrell Williams and rookie tailback Josh Jacobs there may not be a QB in the NFL who received a bigger boost in passing-game talent.

Carr’s never been a top-12 fantasy quarterback, but he’s come close a couple of times. Even if that’s all he does in 2019, he’ll finish well above his non-existent ADP.

Did you enjoy Gary’s take on QB Fantasy Sleepers? Check out his full archive for more great fantasy analysis.