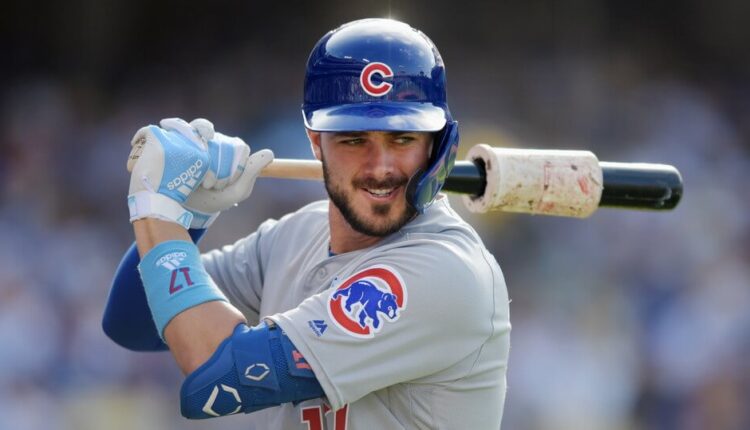 For a handful of years, Kris Bryant was one of the top options at the hot corner in fantasy baseball. But just as quickly as he rose to superstardom, he’s fallen down to a mid-round pick and someone barely worth drafting as your starting third baseman. This slide was capped off with a disastrous 2020 season filled with injuries and poor play to the point where he was dropped in many leagues. Can we expect a rebound in 2021?

Is Kris Bryant Worth The Headaches Anymore?

Let’s start by rewinding to the beginning of the 2015 season. Personally, I was just a 24-year-old baseball fanatic that was still two years away from making my writing debut here at FantraxHQ. But one thing for me that was the exact same back then was my immense resentment for service time. I’m sure if I had been on Twitter back then, you would’ve seen plenty of tweets about how Kris Bryant should have been in the opening day lineup for the Cubs or even up late in 2014 after KB posted a beastly .325/.438/.661slash line with 43 homers in 138 games between Double-A and Triple-A. The moral of this paragraph is that I was a BIG Bryant supporter back in the day. If you ask any of my buddies in my longstanding home league, they’d back that up.

That’s what made it so hard for me to change my tune when it came to Kris Bryant over the last few years. Once Bryant did debut in 2015, two weeks into the season, he went on to win NL Rookie of the Year and followed that up with an MVP award in 2016 after dominating to the tune of a .292/.385/.554 slash line, 39 home runs, 102 RBI, eight steals, and a league-leading 121 runs scored.  However, since then, Bryant hasn’t even sniffed his MVP numbers and is coming off a brutal 2020 campaign.

Granted, it was a shortened season and he wasn’t ever 100% healthy, but Bryant was a colossal disaster for anyone that used a top-50 pick on him in drafts. 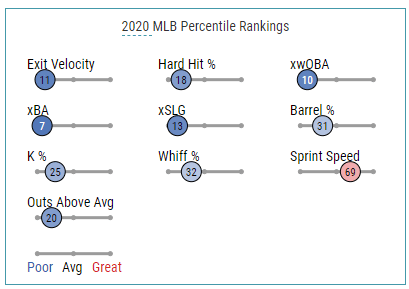 The “he wasn’t ever 100% healthy” part is what I want to focus on. Doesn’t it seem like Bryant is always battling some sort of injury? He gave the illusion that he was a durable player in his first three seasons, but the last three have been a much different story. Out of a possible 384 games, Bryant has taken the field for 283 of them or 73.7%. That equates out to 119.4 per 162 games. As we’ve seen with Aaron Judge and Giancarlo Stanton, it’s difficult to justify an early-round selection when there’s a high likelihood of an IL stint or two throughout the season.

Just look at 2020 for example. The season was barely two months long and Bryant missed at least some time due to FIVE different ailments.

What is this, a game of Operation? In addition to all these, Bryant has dealt with multiple shoulder issues over the years which always seems to hinder one’s power output.

I’d probably rather play that than roster Bryant in fantasy right now. Okay, maybe that was a bit harsh, but until Bryant can both stay healthy and produce at a high clip again, I’m not going to pony up the price it’s going to take to acquire him. That price isn’t even overly high right now either. In early 2021 mock drafts, Bryant’s ADP sits at 118.7 as the 12th 3rd baseman off the board. While that’s the lowest it’s been since his rookie season, he’s still being drafted as a back-end starting third baseman. Scroll back up to his stats above. Can he produce enough to meet this ADP? Sure. But at the same time, there’s a better chance that he falls short than he does of exceeding it, with his durability being a big reason for that.

That brings me to his production. Even when Kris Bryant is fully healthy, he hasn’t been a standout fantasy performer. Since his 2016 MVP season, Bryant has produced a per-162 pace of 29 homers, 79 RBI, 111 runs, and five steals with a .278 average. The runs are certainly nice, as is the OBP, but this is an easy to come by profile in today’s baseball and fantasy baseball landscape. Bryant doesn’t run anymore and usually hits 1st or 2nd in the order, limiting his RBI opportunities, so there are two categories where he’s average (RBI) or below-average in (steals). It’s not like Bryant was a burner, but his steal totals of 13, eight, and seven in his first three seasons gave his overall fantasy value a little boost.

I’m not sure we see any additional power from Bryant either. In fact, I’d take the under if we’re setting his home run over/under at his per-162 last four seasons pace of 29. My reasoning for that lies in his exit velocities and hard-hit rates. Simply put, they’re not good. This wasn’t just a 2020 issue either as you’ll see below. 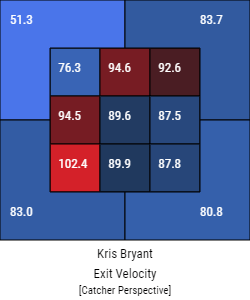 What has saved Bryant and allowed him to remain near 30-homers is the launch angle he’s generated each season, ranging between 17.2 degrees and 20.7 degrees every year. 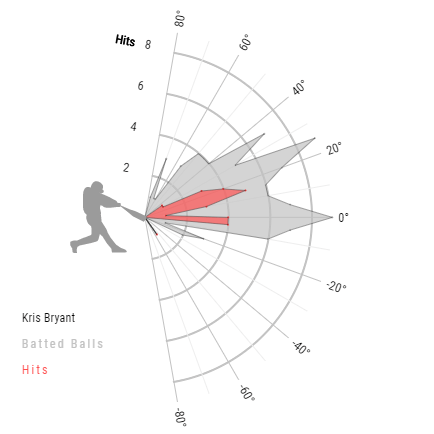 You can make the case that since his launch angles have remained consistently in the ideal range, that his power pace is sustainable. And that’s fair. But at the same time, Bryant hasn’t given any indication that he can return to his 2016 power levels. His exit velocity and hard-hit rates are trending in the wrong direction and have been for nearly half a decade now. So again, this wasn’t just a 2020 issue for Mr. Bryant. He’s fallen into that dreaded “better in real life than fantasy” category, and frankly, has been there for a while now.

While the power has trended down in recent years, Kris Bryant’s contact profile and plate approach have remained status quo for the most part, especially with his swing metrics. The only area that took a bigger hit in this down season was his O-Contact rate which dropped 7.1% down to 53.2%, his lowest mark since his rookie season in 2015.  Outside of that, Bryant’s contact and SwStr rates have steadily declined for three consecutive seasons, but neither are overly worrisome quite yet. While I’m concerned about his power moving forward, Bryant should still be able to produce respectable batting average marks with a solid OBP thanks to his higher walk rate that was above 10% every year up until 2020.

As mentioned above, Kris Bryant is being taken around pick 118 overall as the 12th third baseman off the board. That’s honestly a fair range for him to be taken, but there are a few names I’d rather take in that range or a few rounds later. If you don’t want to deal with the headaches Bryant will likely bring, I’d recommend targeting Alec Bohm in that same area. In general, the hot corner gets uninspiring in a hurry, so this is a position I’d recommend tackling in the first 100 picks or waiting until late and going with someone like Miguel Sano or Tommy Edman. There’s honestly not a big difference between Bryant and the options being taken several rounds later.

As for dynasty leagues, I traded away any share of Bryant that I had. Luckily, in a few of those leagues, I did so before his overall value really started to take a nosedive. As of now, Bryant ranks 95th overall, 12th among all third basemen. Just one year ago, he was still top-50. If we see the same Bryant in 2021 with subpar quality of contact metrics and struggling to stay on the field, that ranking will continue to slide well out of my top-100.