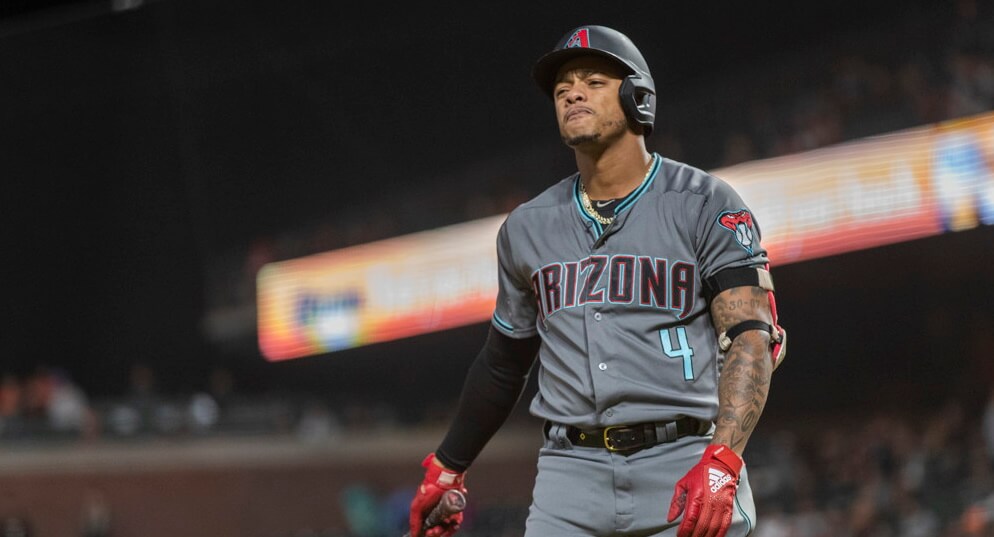 Ketel Marte was a hot commodity in 2020 Fantasy Baseball drafts after a scorching hot 2019 season. Playing a premium position like second base made Marte a player everyone wanted to get their hands on. With his power breakout in 2019 and the ability to steal bases, it seemed Marte had turned the corner.

Sadly, 2020 was a disappointment for the young second basemen, whose power disappeared, and a wrist injury hampered his final few weeks. In early 2021 drafts, his draft price is all over the board. It is clear Fantasy Baseball players are struggling with how to value him. What can we take away from his performance over the last several years, and will 2019 remain an outlier? Let’s check it out!

2019 was quite an outlier compared to Ketel Marte’s career. The power output and his batting average were quite a surprise. If you take out the 2019 season, Marte has just 24 career home runs in 1,743 plate appearances. His .329/.389/.529 slash line also stands out as a huge outlier. While I do not think Marte reaches any of those numbers again, there is plenty in his profile that suggests he could be a .300 hitter with 25 home runs. We will discuss that more in a later section. Regardless, his numbers leave many wondering, who is the real Ketel Marte?

As we previously discussed, Marte’s 32 home runs in 2019 are an outlier for his career. Before 2019, Marte compiled just 22 home runs in his first 1548 plate appearances over four seasons. No one, I mean absolutely no one saw a 32 home run season coming from Marte. While it is easy to call it a flukey power season, statcast data actually suggested he underperformed, giving him 34.7 expected home runs

There are some notable and consistent signs in his profile. First, his extremely high max exit velocity. Max exit velocity measures the hardest-hit ball from a player throughout the season. Marte has been consistently at the top of the league in each of the last three seasons, including 2020, where he had the seventh-best max exit velocity among hitters

He has also posted a solid hard-hit rate during that time frame. 40 percent is not an eye-popping number, but none the less, it is solid and has been consistent. Marte has posted consistent hard-hit rates and high max exit velocities leading me to believe his power was not a fluke in 2019. I probably would not expect 32 home runs again, but 24-28 home runs annually should not be out of the question. I would not be concerned with his 2020 home run output, as it is possible that his wrist bothered him all season

Several aspects of Ketel Marte’s batted ball profile could explain both his strong 2019 and down 2020 season. The first number that stands out to me his home run-to-fly ball rate. Marte hit a career-high 32 home runs in 2019, largely thanks to a high HR/FB rate of 19 percent. The league average usually sits right under ten percent, so Marte was double that. Then, in 2020, he hit just two home runs while posting a 3.8 percent home run-to-fly ball rate. Both are extreme outliers, and I expect Marte to return closer to his career number of 10.2 percent in 2020.

Also, seeing Marte’s pulled and hard-hit batted balls from 2019 further explains the home run output. When you pull a hard-hit fly ball, it largely increases the chances of a home run. In 2019, Marte posted career highs in all three of those mentioned categories. Those numbers all fell in 2020, therefore, leading to a drop in home runs.

The good news is that Marte’s batted ball profile did not change significantly. There is nothing here that is overly concerning moving forward. You can expect his home run-to-fly ball rate to increase and hopefully see his hard-hit rate sustain or improve in 2021.

Ketel Marte’s swing rates took a turn in the wrong direction in 2020. The negatives were that Marte swung less, especially on pitches in the zone. This was actually a common trend for hitters in 2020. Did the lack of video really have them this unprepared? Would these numbers have risen over a full season? These questions remain unanswered.

For Fantasy Baseball, I use contact rates quite often when evaluating hitters. The fact that Marte consistently posts high contact rates means he is a player that I will look at a little harder in drafts. He also posted the lowest swinging strike rate of his career, which is likely a big reason his strikeout rate was also the lowest of his career at 10.8 percent. In a year where strikeouts were up, Marte posted the fourth-lowest strikeout rate among qualified hitters.

In summary, Marte’s lowered swing rates likely led to his improved plate discipline regarding both his walk and strikeout rates. But the reality is, he likely needs to be more aggressive on pitches in the zone if he wants to see improvements in his counting stats.

Also, take a look at Marte’s break down by pitch. Again, in 2019, he was equally good against all types of pitches. Sure, the expected numbers suggest he overperformed, but that is easy to do when you hit .329. The good news is that Marte’s xBA in 2019 was still an impressive .305.

In 2020, it was a different story. Marte still performed well against both fastball and offspeed pitches. He clearly saw them well, posting low whiff rates and striking out minimally. Breaking pitches seemed to bother him, as he hit just .206 and posted a .266 expected slugging against those offerings.

I am not overly concerned with Marte’s splits, though. In the small sample of 2020, it is highly possible he could have picked up his pace against both right-handed pitching and breaking pitches. Marte has hit right-handers well for most of his career, so I see no reason why he does not return to that form in 2021.

Like most other statistical categories, Ketel Marte’s 2019 statcast data stands out. Fortunately, there are some changes that he appeared to make in 2019 that also transitioned over into 2020. He nearly doubled his average launch angle in a conscious effort to hit the ball on the ground less. Marte’s ground ball rate dropped from 51.2 percent in 2018 to 43.1 percent in 2019. This is good news if you are hoping he can hit more home runs. His launch angle dropped a hair in 2020 to 10 degrees, and his ground ball rate increased to 46 percent.

Using Marte’s statcast data, we can conclude that he has the ability to hit the ball harder than most players in baseball. It appears there has also been a conscious change to hit the ball in the air more, as evidence by his increased launch angle in both 2019 and 2020. And finally, Marte may not stand out with his hard-hit rate, but he does produce consistently good numbers in that category.

From a durability and injury standpoint, Ketel Marte has remained relatively healthy and on the field. He did deal with left wrist inflammation down the stretch in 2020, which kept him out for 13 days in September. Was this part of the reason he struggled before landing on the IL? It is possible. Upon return over the final five days of the season, Marte posted five hits over those five games.

Before 2020, Marte last landed on the IL in 2016, which is good news from a durability standpoint. Between both seasons in 2018 and 2019, Marte played 91.6 percent of possible games. This season, Marte played 45 of 60 games despite missing 13 days due to injury. From a durability standpoint, I feel comfortable projecting Ketel Marte to play between 145 and 155 games in 2021.

Ketel Marte is quite the perplexing player, as you can tell. I have struggled through my projections for hin in 2021. Steamer currently projects Marte to play 149 games, accumulating 666 plate appearances. They have his projected slash line at .286/.352/.473. The slash line feels like a pretty realistic outcome in 2020.

Steamer also projects 21 home runs, three stolen bases, 90 runs scored, and 78 RBI. Knowing Marte’s ability to hit the ball hard leads me to believe he is capable of 25 home runs, but I understand the conservative projection of 21, given he has only eclipsed 14 in just one season of his career.

Marte’s ADP has been all over the board so far for 2021. In the #2EarlyMocks, Marte’s ADP was 78.2 between nine drafts. His high pick being 65 and his low pick being 97. In an early NFBC draft, Marte went 87th overall. Given the landscape of second base for Fantasy Baseball, I feel comfortable taking Marte around pick 80. We know the upside is there for a top 20 hitter, and the downside is a hitter who gives you a great batting average and solid numbers across the board.