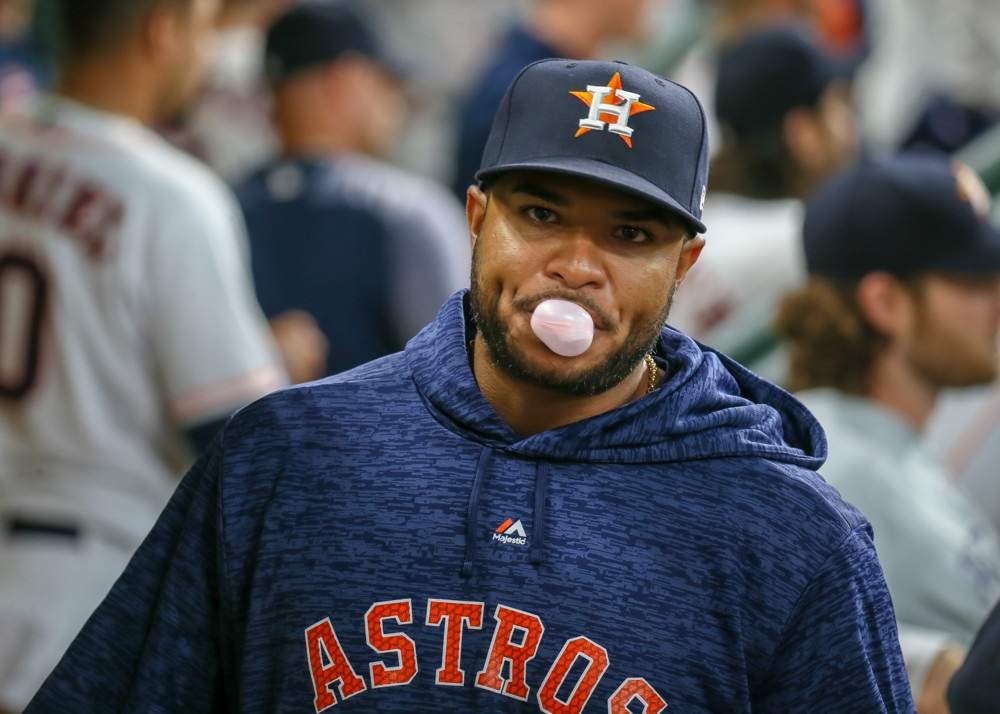 Once in a while, I feel a little lazy. We all do. There’s no harm in that, is there? Well, for Josh James, his constant lazy feeling turned out to be caused by an actual medical condition: sleep apnea. He was so lethargic that he was falling asleep driving even after sucking down cup after cup of coffee. Something had to be done.

He finally visited a sleep specialist, who diagnosed him with sleep apnea. He was advised to start using a CPAP (Continuous Positive Airway Pressure) machine. Days turned into weeks, weeks turned into months, and gradually Josh James found new energy. He was able to get through the day with much less caffeine and didn’t need naps. Not only did his treatment impact his daily life – it altered the course of his career.

The Emergence of Josh James

Josh James (or Joshua apparently, if you’re on Fangraphs) wasn’t exactly a highly touted prospect. He was a 34th round draft pick out of Western Oklahoma State University back in 2014 as the 1,006th player drafted. While his results were solid in the low minors, they weren’t enough to put him on the fantasy radar. Even in 2017 at Double-A, he posted a modest 4.38 ERA over 76 innings with an 8.53 K/9 and 3.79 BB/9. Ho-hum.

It was then that his sleep apnea diagnosis and improved strength and conditioning really turned things around. Along with his newfound energy came enhanced performance on the mound. His velocity ticked up from low-90’s to 97 MPH, reportedly touching 101. He was reassigned to Double-A in 2018 but was quickly promoted after punching out 38 batters in 21.2 innings with a  2.49 ERA.

It was upon his promotion to Triple-A Fresno when Josh James really started turning heads. The numbers remained eye-popping, as he would go on to maintain a 12.92 K/9 and 3.79 BB/9 over 92.2 innings, pitching to a 3.40 ERA. When September rolled around, the Astros gave him a call.

The head-turning didn’t stop when James made his debut against the Angels on September 1. He gave up three runs over five innings with three walks but punched out nine Halos. He would go on to make six appearances; three starts, three relief appearances. The final line would look like this: 23 IP, 11.35 K/9, 2.74 BB/9, 2.35 ERA, 0.96 WHIP. Granted it’s a light month’s worth of innings, but the results are impressive nevertheless, especially from a rookie.

Fueling those results is a fastball/slider/changeup mix. The aforementioned heater sits at 97 and garnered an excellent 13.17% whiff rate in those 23 innings. Among qualified starters, only Luis Severino’s 97.6 MPH average fastball velocity would exceed James’s 97.1 mark. Velocity isn’t everything as we well know…but it ain’t bad.

His offspeed pitches got the job done as well. His threw his slider 17% of the time and his changeup 26%, missing bats aplenty with both offerings. Here’s a look at his whiff rate breakdown per pitch compared to the league average. 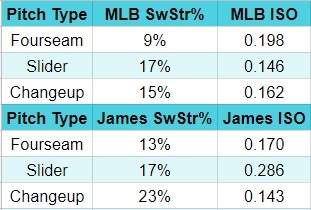 While everything here looks very good, it’s important to remember that this is still a very small sample. Things such as whiff rate tend to stabilize relatively quickly, but you have to bear in mind that this is the first glimpse MLB players have had of James’s stuff. He also only faced eight batters a third time through the order as a starter. If he is going to remain a starter, he’ll need to pitch into the sixth inning more often, making that dreaded third trip through the order a more common occurrence.

That brings up a point that is still hotly debated: is Josh James a starting pitcher? By his own admission, he still struggles to repeat his mechanics consistently. That ties into his largest problem, which is his elevated walk rate. His 65.9% first-pitch strike rate is very encouraging, but again, a small sample. He has a longer track record of a high walk rate throughout the minors, so we can’t just assume that he has unlocked something with the Astros and can repeat a 2.74 BB/9. That’s a rate he never came close to approaching in the minors.

James was able to limit hard contact to 26.4% in 2018. Over the course of a full season, that mark would have ranked third in baseball behind only Zack Wheeler and Aaron Nola. Of course, the difference between 23 innings and 180 is like the difference between Peter Dinklage and Hafthor Bjornsson. We can’t assume he’d keep up that soft contact all year. His BABIP was a mere .240, although some of that can be attributed to the soft contact and gnarly 13% pop-up rate.

The strikeouts will come in droves. Of that, I have little doubt. Where my doubt lies is in his ability to limit walks enough to pitch deep into games and not damage your WHIP. Otherwise…boy is he interesting. His three-pitch mix is plenty enough to turn over a lineup three times. He pitches for one of the best teams in baseball, so as much as you can count on wins being there, they should be there for James. Even the walk rate, which Steamer projects at 3.88 BB/9, isn’t anywhere near as bad as last week’s Reality Check star Sean Newcomb. Newcomb – currently being drafted 31 picks before James – has a career walk rate of 4.70 BB/9, and Steamer projects him at 4.46.

Josh James has a ton of upside at ADP 209/SP 56. The starter going before him right now is Julio Teheran. Julio Teheran, he of the 4.89 FIP over the past two seasons. How tantalizing. There is certainly volatility here, of course. The Astros could still sign or trade for more starters and push James into a relief role. In a starting role, however, James could easily put up a (good) Carlos Martinez type of season and finish inside the top 30. That’s exactly the type of upside I’m looking for in those middle rounds.