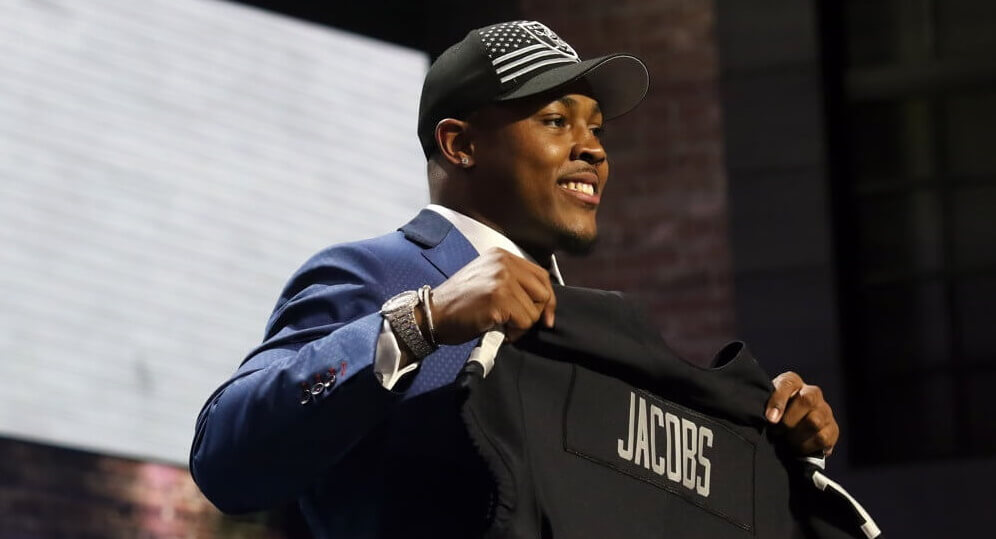 The Fantasy Chief makes his Fantrax debut with a look at Raiders rookie RB Josh Jacobs and how well first-year running backs have fared historically in their first crack at the NFL.

On Thursday, July 9 the Oakland Raiders announced they had signed their 2019 first-round draft pick, RB Josh Jacobs. Jacobs, a 5-foot-10, 219-pound running back they selected with their 24th overall pick. This pick, along with 2020 first, third, and sixth-round picks were all acquired by the Raiders in return for Khalil Mack. The Bears also received a 2020 2nd round pick and a conditional fifth-rounder.

Jacobs played in 42 games with Alabama from 2016-2018 while also securing the 2017 National Championship for the Crimson Tide. He even earned Most Valuable Player honors. Jacobs eclipsed 251 carries for 1,491 yards (5.9 average) with 16 rushing touchdowns during his stint at Alabama. He also produced in the receiving game with 48 receptions for 571 yards while taking one for a score. Jacobs even left his mark in the return game where he took 19 kickoffs back for 514 yards and one back to the house for six.

In his last season for the Tide (2018) he totaled 15 scores, with 11-rushing, 3-receiving, and one on special teams. He even tied for the team lead in all-purpose yards with 1,315. Across the FBS, Jacobs’s 11 rushing touchdowns ranked him third among players who received less than 120 or fewer rushing attempts.

With the amount of draft capital the Raiders invested in Jacobs, they will look for him to alleviate defensive pressure off Derek Carr and the passing game. The Raiders also welcome two new wideouts in Antonio Brown and Tyrell Williams. The real question is how will Jacobs’s game translate into production at the NFL level and more importantly getting a return of investment for fantasy implications.

I decided to look back at the history of first-round running backs and how their rookie years played out. From this, we can get an idea of what we can expect from Josh Jacobs. As of recently, we have the likes of Saquon Barkley (2nd in 2018), Leonard Fournette (4th in 2017), Christian McCaffrey (8th in 2017), Ezekiel Elliott (4th in 2016), Chris Johnson (24th in 2008 – same overall as Jacobs), and many more. Jacobs will look to solidify himself among those great backs.

Let’s take a look at the numbers because these stat lines/percentages should instill great confidence for fantasy owners who invested in Josh Jacobs. No matter if you drafted him in either your rookie dynasty drafts, redraft, or even in best-ball leagues, you will surely see solid production from him.

Even more recent, since 2000 there have been 18 running backs selected in the first round. Of those 18 backs, 16 (89%) had at least 1,000 scrimmage yards. Fifteen out of the 18 backs (83%) had at least six touchdowns. William Green, Michael Bennett, and Melvin Gordon were the only backs who fell short of the 1,000 scrimmage yard mark in each of their rookie campaigns. On the other hand, Ronnie Brown, Michael Bennett, and Melvin Gordon did not reach the six touchdown threshold their rookie year. In conclusion, only two of the 18 backs did not reach either threshold – Michael Bennett and Melvin Gordon. I’ve included the chart below if you want to take a look (Credit to Pro Football Reference).

Given the percentages above, I have a great amount of confidence in Josh Jacobs on the field as well as for my fantasy team. He’s in great company with the likes of Barkley, Elliott, D Martin, Tomlinson, and even CJ2K. Yes, the amount of draft capital varies. Yet since 2000, only one out of four players who were drafted past 20th overall fell short of both six touchdowns and at least 1,000 scrimmage yards – Michael Bennett.

Josh Jacobs is currently being drafted as the RB1 in front of fellow rookie backs such as Chicago Bears’ David Montgomery and Philadephia Eagles’ Miles Sanders in dynasty startups. Jacobs is clearly in the 1.01 conversation for non-Superflex rookie drafts alongside Patriots’ first-round selection, wide receiver N’Keal Harry from Arizona State University (Per DLF @RyanMc23).

Jacobs is currently going off the board as RB20 behind the likes of Derrick Henry, fellow former Jaguars’ first-rounder Leonard Fournette, Atlanta Falcons’ Devonta Freeman, as well as Detroit Lions’ Kerryon Johnson. He’s currently being drafted in front of guys such as Kenyan Drake of the Miami Dolphins, Chicago Bears’ David Montgomery, Denver Broncos’ Phillip Lindsay, and Ravens’ free-agent signee Mark Ingram (all ADP per the DRAFT app – @PlayDraft on Twitter).

Will we see this trend continue into 2019 or will we see it come to an end with Saquon Barkley in 2018? Josh Jacobs, David Montgomery, Miles Sanders, Darrell Henderson, Devin Singelary, Damien Harris are just a few solid candidates that may replicate this trend. Jacobs may be the favorite due to the draft capital, but I wouldn’t be surprised if some dark horse names find their way close to the top of rankings. We’ve seen it happen in the past with Howard, D Johnson, Hill, Lacy, and Morris.

The only true concern that I see which could possibly hold him back is his part in the receiving game due to Jalen Richard’s presence. In fact, Richard was the most efficient running back in the NFL on a yards per touch basis. Â He even tied for seventh-most running back targets (81) and finished with an 84% catch rate. If Jacobs receives some of Richard’s passing down work, without question I can see Jacobs being a real nice fantasy producer this season and going forward. Jacobs could easily smash his ADP with his upside. I would take him over the likes of Kenyan Drake, Mark Ingram, and David Montgomery in every one of my drafts if he fell to me.

My Take on Josh Jacobs

Overall, Josh Jacobs is a fairly safe bet for some, if not most of the stat-lines mentioned earlier. These lines include 200 carries, 1,200 scrimmage yards, and at least 6 touchdowns. All this is barring any injury or setbacks. A great amount of draft capital was invested in him. With this, the Raiders should hand him a solid workload which should translate to some nice fantasy production. The Raiders did bring in new wideouts for Carr so the run game won’t be their primary identity.

Look for Josh Jacobs to provide balance on offense and have a solid rookie campaign out in Oakland. I’m not saying he’s the next Saquon or Zeke, but he’s in a solid position to succeed on the field and for fantasy owners. Jacobs slots in for me as an upside RB2 in redraft leagues as well as my RB1 in 2019 rookie dynasty drafts.