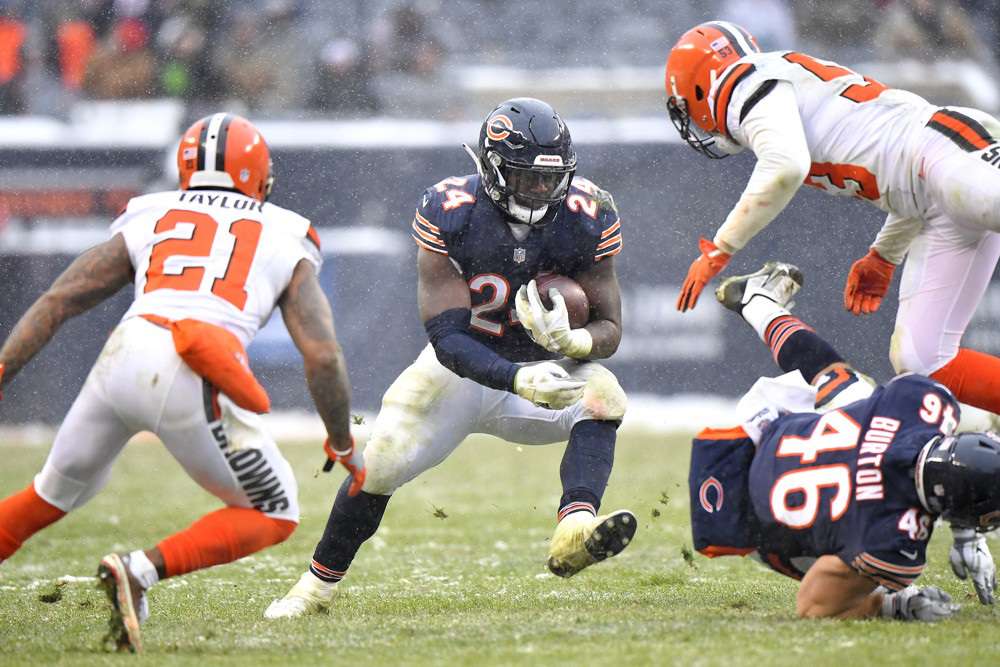 When you cover Fantasy Football in June, it is always confusing to see the falling ADP of a really good player. Sometimes the ADP dropping can be attributed to a reported injury or reports from the lengthy rumor mill that exists in the NFL offseason. There are players, however,  that do not get the respect they deserve in Fantasy Football and they instantly take a backseat to the flashier upside player that has potential. Potential is great and all, but it has won absolutely zero Fantasy Football championships.

When constructing a roster there has to be a healthy medley of upside players as well as those with a low floor. A roster full of either will leave a team as one of the lowest scorers in a Fantasy league on any given week. It is the low-floor players that get a bad reputation in the Fantasy world that are oftentimes overlooked.

In this week’s Fantasy Stock Watch, we project a falling ADP for one of the most underrated running backs of the last two seasons and look at perceived value with some high-upside guys in the later rounds.

Jordan Howard has never been a sexy pick. In his rookie season, he was selected at the end of drafts because people were still worried about Jeremy Langford. Last season he slipped to the third round typically and ended up as the RB14 in PPR and RB10 in standard. While those finishes are solid for Howard, he finished outside of the PPR RB1 range in 10 weeks of the season. In eight of those weeks, Howard was not even an RB2. This is the makeup of a player that, despite his finish on the season, is completely unownable in this writer’s humble opinion as it is extremely difficult to project which games he will hit on.

According to NFL Next Gen Stats Howard saw eight-plus defenders in the box 43.12 percent of the time which was seventh most in the NFL. When he was on the field, defenses understood that the play would most likely be a run up the middle. In the simplistic John Fox-led offense, Howard was not utilized well in the passing game and was often times scripted out when the Bears fell behind on the scoreboard. Howard managed to average 4.1 yards per carry on 276 attempts for 1,122 yards in 2017 which is impressive considering defenses were able to predict that the ball was going to him if he was on the field.

Howard had fewer yards on more carries in his sophomore season. In 2016 Howard had 1,313 yards and averaged 5.2 yards on 252 carries. His targets, receptions, and receiving yards were all up in his rookie season compared to last year which hurt his value tremendously in PPR.

Howard’s problems catching the ball have been well documented and he is never going to be a PPR monster. Tarik Cohen is going to get a lot of work in the passing game now that Andy Reid disciple Matt Nagy is Head Coach. However, a common misconception here is that this will hurt Howard’s touches. Howard will be used more in the passing game under Nagey and should see an increase in targets (32 last season). The passing game in general for the Bears is going to be more spread out and harder to figure out for defenses.

Howard’s typical 250-plus carries are a lock and should see a boost in an offense that allows more opportunity for burst-plays. With Nagy’s offense, he could also see more production as a receiver. At 3.02, Howard will see a falling ADP in drafts – especially in home leagues where Fantasy gamers like to draft quarterbacks and tight ends early. The third-year running back could slip into the fourth round where he will exceed value on his way to a high-end RB2 season with RB1 upside.

The Fantasy football community is slowly starting to remember that Ty Montgomery was a very relevant name in the first quarter of the 2017 season. Recency bias has put Aaron Jones and Jamaal Williams above him in terms of ADP but Montgomery is slowly creeping up draft boards in the PPR world.

Last season Montgomery was the workhorse for the Packers before going down with a rib injury. His touch totals in the first three weeks of the season were 23, 16, and 20, and he was used as both a runner and a pass-catcher. Jones took over (after Williams was injured as well) and finished as an RB1 in Weeks 5 and 7. Injuries plagued the Packers as Jones also missed time soon after and Williams and Montgomery got more reps once they were healthy.

Montgomery finished as the RB13 in Week 10 as he was being eased back into the offense but was in a full-blown committee at this point while Williams had extended success in the later weeks of the season (all without Aaron Rodgers). With each of these backs having RB1 finishes in 2017, it is unclear which back the Packers will lean on.

In what looks to be a timeshare, sign me up for the guy who is going to be cheaper and has more upside. Right now that is Montgomery. All three guys have presumed value and can be Fantasy-relevant depending on the week but Montgomery has proven chemistry with Rodgers and that will keep him on the field. He is the preferred pass blocker which also makes him the lead-candidate for the third-down role. As his ADP rises, keep an eye on Montgomery as a guy who can provide sneaky value on a high-scoring Packers squad.

David Njoku is being drafted as the 18th overall tight end on Fantrax right now. TE18 would be an improvement upon his TE24 finish in his rookie season where Njoku was only on the field for 46.82 percent of the Browns’ offensive snaps.

Seth Devalve was used more because of his blocking ability but was able to muster just 58 targets compared to Njoku’s 60. Njoku finished with an underwhelming 32 receptions for 386 yards and four touchdowns in 2017, but this should not be viewed as a disappointment. Tight ends hardly finish anywhere close to the Top 12 in Fantasy in their rookie season. Evan Engram had a great season, however, and finished as the TE5  in his first year due to sheer volume (115 targets).

Njoku was the third tight end drafted in the first round of the 2017 NFL Draft behind O.J. Howard and Engram, so he will always be compared to those guys. Njoku has a chance to be better than the other two players. His size and speed combination is off the charts and he has superior route running ability.  Njoku ran a 4.64 40-yard dash at 6’4”, 246 pounds. This size and speed was a dominating factor at the University of Miami where he averaged 16.6 yards per reception on 64 catches in two seasons.

In the new-look Browns offense, Njoku is going to be used more out of the slot. Tyrod Taylor is a guy who likes to utilize his tight end (see: Charles Clay) and this Browns offense looks to be one of the more exciting units in the league in 2018.

A big factor into Njoku’s falling ADP is the plethora of options the Browns have. Josh Gordon and Jarvis Landry are going to command targets. Duke Johnson and Corey Coleman will be used in the passing game and Carlos Hyde can catch passes out of the backfield too. Devalve will still be used as well, but in year two look for that split to tilt in favor of Njoku. His targets will increase and he is a threat in the red zone on a team that will pass the ball a lot with new Offensive Coordinator Todd Haley.

With a position as volatile as tight end, waiting on one is the safer bet. Do not waste a high pick with a player who is going to put up mediocre stats. Jimmy Graham is being taken 77.99 picks ahead of Njoku and has been known to lay an egg on weeks he is not scoring touchdowns. Njoku is a sneaky pick in an offense that will be passing the ball a lot – grabbing a piece of this offense at a low-risk could pay off. Njoku will see a falling ADP once again in Fantasy drafts in 2018 and the explosive tight end has TE1 upside in a landscape of mediocracy at the position.

Medical Corner – Ohtani Injury Update, Plus News on Thor and a Setback for Injured Ace