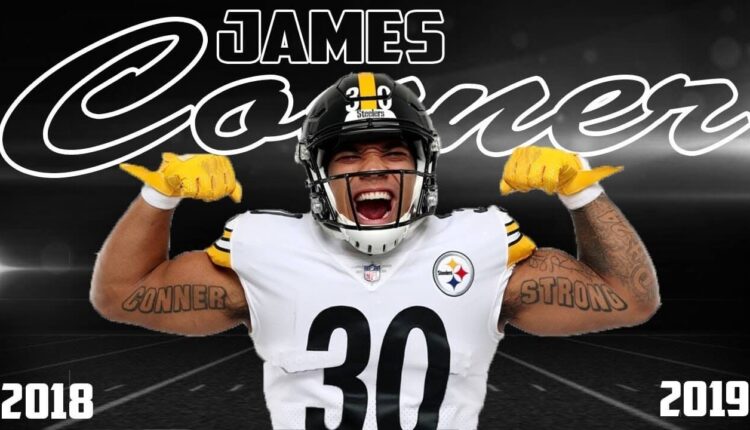 It’s a time of significant change in the Steel City. The “Killer B’s” are no more—tailback Le’Veon Bell joined the New York Jets in free agency, and wide receiver Antonio Brown was traded to Oakland. That thrusts third-year pros James Conner and Juju Smith-Schuster into prominent roles for a Steelers team that aspires to get back to the playoffs in 2019.

Of course, that’s nothing new for Conner, who started in the backfield last year while Bell sat out the season in a contract dispute. After gaining over 1,400 total yards, scoring double-digit touchdowns and finishing sixth in PPR fantasy points among running backs, many in the fantasy community are bullish on Conner in 2019—he’s coming off draft boards inside the first round of 12-team leagues according to early ADP data at Fantasy Football Calculator.

Is that a wise use of a fantasy owner’s all-important first pick? Is Conner about to take the next step as a player and join the ranks of the NFL’s elite in the backfield? Or have we seen the best there is to see from Conner from a production standpoint—creating the possibility that he’s being overvalued?

It didn’t take long for James Conner, a third-round pick of the Steelers back in 2017, to make fantasy owners start forgetting about Bell last year. In the season opener against the Cleveland Browns, Conner carried the ball 31 times for 135 yards and two touchdowns. Conner added 57 more yards on five catches and finished Week 1 as the highest-scoring fantasy RB in the AFC.

While speaking to reporters after that game, quarterback Ben Roethlisberger heaped praise on his young runner. “I thought he played well. He ran hard, caught the ball well, made plays for us,” Roethlisberger said. “I told him I was really proud of the way he played in his first game.”

Roethlisberger wasn’t alone in that praise. More than a few fantasy owners blew every dime of FAAB money they had scooping Conner off the waiver wire in leagues where he wasn’t drafted. He was a revelation—the type of late-round pick or waiver pickup that wins leagues.

And Conner was only getting started.

The rest of September was relatively quiet for Conner. But beginning with a Week 5 win over the Atlanta Falcons, Conner went on a month-long tear that included four straight games with over 100 yards on the ground. In three of those four games, Conner scored a pair of rushing touchdowns. Against the Cleveland Browns in Week 8, Conner piled up 212 total yards on 29 touches.

At the end of that game, Conner had 922 scrimmage yards—second-most in franchise history through seven games. Over that four-game rampage, no running back in the NFL had more fantasy points per game than James Conner. He looked every bit a star in the making.

“He wants to be that guy,” guard Ramon Foster said of Conner, via ESPN’s Jeremy Fowler. “He plays with a passion that’s out of this world.”

The problem is that hot month or so was as good as things got for Conner. Beginning with a Thursday night affair against the Panthers in which Conner tallied a relatively pedestrian 14 touches for 73 yards, Conner’s production tailed off over the second half of the season—way off.

In that Panthers game, Conner wound up in concussion protocol, although he didn’t wind up missing any time. He did miss time  with an ankle sprain, however—Weeks 14-16, to be precise.

If memory serves, those particular weeks are rather important.

Over Conner’s first eight games in 2018, he topped 20 touches six times, went over 100 total yards five times and scored 10 touchdowns. He was fantasy football’s No. 3 PPR running back—and tops among all backs in the AFC.

From Week 10 on, Conner had a grand total of zero 20-touch outings. The same number of games with over 100 total yards. And just three touchdowns. The top PPR fantasy back in the AFC through nine weeks ranked outside the top 35 the rest of the way.

Some blamed a “rookie wall” of sorts borne of all his early-season touches. Others pointed to nagging injuries. Others still looked to opponents’ game-planning specifically to stop Conner. Whether it was one of those things are all of them is debatable. What isn’t is that Conner wasn’t close to being the same running back over the second half of the season.

To his credit, Conner told Joe Rutter of the Pittsburgh Tribune-Review that he isn’t taking anything for granted in his third NFL season, citing the presence of Jaylen Samuels and rookie Benny Snell in Pittsburgh as plenty of motivation to stay hungry.

“I haven’t earned anything yet,” Conner said. “That’s what training camp and everything is for. Everything is earned, not given. In this league, people are always coming and going. Jaylen and Benny are talented.”

Conner also allowed that he realizes Samuels and Snell are going to see their share of touches in 2019, even if there’s no question who the Steelers’ No. 1 tailback is.

“Who doesn’t like carrying the ball?” he said, “But look around the league, and a lot of teams are successful in doing well with multiple backs. That’s how you win games is with depth, and I’m all for it.”

From an NFL perspective, that depth is a good thing. Samuels showed himself to be a talented ball-carrier and pass-catcher in his own right when Conner got hurt last year, and Snell was a wildly productive between-the-tackles bruiser at Kentucky.

Giving those backs some work not only diversifies the Pittsburgh backfield and makes it harder to defend, but it also should (in theory, at least) help to keep Conner fresh in the hopes of avoiding a repeat of last year’s stretch-run fade.

However, there’s no denying that the presence of those backs could also cap Conner’s fantasy ceiling a bit. A good portion of his early-season success was due to good old-fashioned volume. We may still get a 25-touch game here and there, but there aren’t going to be as many as last season.

In other words, assuming his backfield mates stay healthy and perform reasonably well, the odds of Conner challenging for a spot in the top-five aren’t especially good. The workload’s just not going to be there.

Welcome to the 21st-Century NFL.

A more reasonable best case for Conner is that he’ll end the year right about where he’s being drafted—toward the bottom of the top-10 at his position. That’s nothing to sneeze at, but it means drafting Conner relatively close to his fantasy ceiling.

Add to that his meh second-half last year (which many fantasy drafters appear to have conveniently forgotten), and there are other players I’m more likely to target at Conner’s ADP. Maybe grab an elite WR in Round 1 and hope a back makes it back around to me early in the second. Or target a player I believe has a higher ceiling like Cincinnati’s Joe Mixon.

This isn’t to say that drafting James Conner will lose you a fantasy football league in 2019.

But he’s not going to win that many, either.