Coming into the 2021 season, many expected the San Diego Padres to be one of the top World Series contenders. This was largely due to having a dynamite pitching staff on paper along with elite position players like Fernando Tatis Jr and Manny Machado. While the pitching staff has been good but inconsistent and their stud hitters have been studly, one of the best stories to come out of this beautiful part of the country is the emergence of Jake Cronenworth, San Diego’s quiet star.

Sure, he might not have the swagger or buzz of a Tatis of Machado, but man, Cronenworth gets the job done and then some, excelling across the board on both sides of the ball. His skills and versatility have not only been a godsend for the Padres this season, but for fantasy managers as well. This has been an extremely difficult and irritating season to navigate through and players like Jake Cronenworth have made our lives just a little bit easier. But is Cronenworth’s success sustainable? Is he a top-100 fantasy player moving forward for redraft and dynasty leagues? That’s what I’m going to dig into today.

If you aren’t playing your dynasty leagues on Fantrax, you’re missing out on the deepest player pool and most customization around. Just starting out in a dynasty league? Then check out Eric Cross’ Top-400 Overall Fantasy Prospects and Top-500 Dynasty League Rankings or Chris Clegg’s OBP Prospect Rankings and OBP Dynasty Rankings.

Also, make sure to check out the Fantrax Toolshed podcast weekly for more dynasty and prospect talk.

Elite At The Plate

When you dive into Jake Cronenworth’s plate discipline metrics, you have to be immensely impressed by what you see.

Out of 136 qualified hitters this season, Cronenworth ranks 10th in contact rate, 3rd in Z-Contact, 24th in O-Contact, is tied for the 8th lowest SwStr%, and has the 25th lowest O-Swing rate. As you can see above, his Zone Contact%, Chase %, chase contact%, and whiff% are all elite, well above league-average metrics. The selectiveness, patience, and discipline that Cronenworth has shown at the plate has led to a 96th percentile whiff rate and a stellar 14.2% strikeout rate which is in the 91st percentile.

On top of that, Cronenworth has also demonstrated an inept ability at working the count and getting on base at a high clip, whether that be via a base hit or a free pass. His walk rate, in general, is around league average at 8.4%, but when you factor in his contact/swing metrics and strikeout rate, this is an advanced plate approach that is very sustainable longterm.

That’s the beauty of plate discipline metrics. You can’t luck into anything like you can with batted ball data due to defender placement on the field. An elite approach is an elite approach and this is the 2nd year in a row that Cronenworth has displayed this type of approach.

A few other great qualities in Cronenworth’s profile is that he doesn’t have any weaknesses when it comes to pitch types thrown to him or spots in the zone. Although his AVG on offspeed offerings is only .197, but his xBA is .242 and he also hit .333 with an .343 xBA against them last season. Cronenworth is hitting .285 and .329 against fastballs respectively and having an xBA of .242 or above against all three pitch classifications means that pitchers can’t simply attack him with one specific pitch if they want to get him out.

In general, Cronenworth has demolished breaking pitches with a .329 AVG, .744 SLG, .460 wOBA, and seven of his 18 home runs coming off breaking balls. The expected metrics are a bit lower, but even with some regression, Cronenworth still should be above-average against two pitch classifications and at least average against offspeed which he only sees 14.9% of the time anyway. 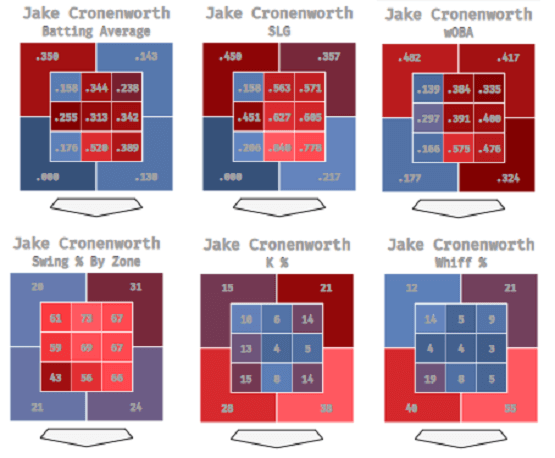 As for his zone metrics, I grabbed six from Baseball Savant that I thought were important in showing his strengths and weaknesses (or lack thereof). As discussed above, Cronenworth is elite inside the zone and won’t get baited into chasing pitches outside the zone very often. There isn’t one quadrant outside the zone where Cronenworth will swing more than 1/3 of the time. And when he does, that contact rate is well above league average.

If you want to nitpick, I suppose you could say that Cronenworth struggles against pitches on the outer two corners of the zone. But then again, thast’s not overly uncommon, even for the best hitters. Given this approach and his solid enough quality of contact metrics, hitting .280-.300 with a .350+ OBP moving forward should be expected from Mr. Cronenworth.

So, we’ve established that Jake Cronenworth can post high AVGs and OBPs moving forward. But as we all know, that’s just one piece of the fantasy baseball value pie. Call it the crust, if you will. Every pie needs a good crust, but what’s within the crust is even more important to one’s fantasy value. What’s within (power, speed, run production) creates the difference between the Luis Arraezs and David Fletchers of the world and the Fernando Tatis Jrs and Ronald Acuña Jrs of the world. And to put it simply, Cronenworth embodies the group in the middle of those two ends of the spectrum.

On the season so far, Cronenworth has racked up 18 home runs, four steals, 59 RBI, and 80 runs scored across his 118 games and 501 plate appearances. That’s good for a 110/25/80/5 pace over 162 games. A lot of this proves to be a sustainable pace for him with the potential for even more in the speed department. Cronenworth has never been a big stolen base threat with only seven steals on ten attempts in 172 career games. However, he’s shown the speed for more than that with a 92nd percentile sprint speed in 2020 and 82nd percentile this season.

Sprint speed is only one piece of the puzzle, but we can realistically hope for more than five steals annually moving forward. Not a ton more, but 10-15 steals per season shouldn’t be ruled out given his speed and stolen base numbers in the minors.

As for Cronenworth’s power, there’s nothing in his profile that signals to me that he can’t be an annual 20-homer threat. Cronenworth is not one to light up his savant page with red when it comes to his power, but the sum of all the parts works and backs up his current production. While his hard-hit rate, exit velocity, and xwOBACON are around league-average, Cronenworth’s barrel rate and optimal launch angle allow him to make the most out of his batted balls in the air. That’s another thing. Cronenworth has trimmed his groundball rate over the last two seasons in favor of more line drives and more fly balls.

This isn’t a profile that will lead to 30-homer seasons, but 18-25 homers annually should be attainable with 5+ steals added to the picture. To add to that, Cronenworth has settled in as a middle-of-the-order bat in a San Diego lineup that ranks top-10 in many categories. Getting to hit behind Adam Frazier, Fernando Tatis Jr, and Manny Machado should bring plenty of RBI opportunities for a hitter that is one of the best in baseball at putting the ball in play and getting on base. Not to mention, Cronenworth also has some combination of Trent Grisham, Austin Nola, Tommy Pham, Eric Hosmer, and Wil Myers hitting behind him each and every game. With his skills and lineup around him, 180+ R+RBI seem like a near lock over a full season of action.

Yes, this matters. We might not use defensive metrics in fantasy (Although, you can on Fantrax), the strong defense and versatility that Jake Cronenworth brings to the table add even more value to his fantasy profile. In 2021, Cronenworth has started games at 2nd base (84), shortstop (16), and 1st base (14) as well. His defensive skills give skipper Jayce Tingler the confidence to move Cronenworth around the infield and having eligibility at three different infield positions is a big boost to his value, especially in today’s landscape of IL trips and COVID absences.

Honestly, when the 2021 season began four and half months ago, I never thought I’d be sitting here in the middle of August writing an article about how Jake Cronenworth is a fantasy star. But here we are. Without question, Jake Cronenworth is a top-100 player moving forward for both redraft leagues and dynasty leagues as well. He’s shown the ability to contribute across the board with annual .280+/20+/5+/180+ aspirations and two or three-position eligibility depending on your league settings. Still only 27 years old, Cronenworth is entering his “physical prime” so the best might still be ahead of him as well. He’s everything Jeff McNeil was in 2019 and then some. Believe the hype and buy Cronenworth as a star player for both real life and fantasy. We’re all living in the Crone Zone.

Fantrax was one of the fastest-growing fantasy sites of 2020, and we’re not stopping now. With multi-team trades, designated commissioner/league managers, and drag/drop easy click methods, Fantrax is sure to excite the serious fantasy sports fan – sign up now for a free year at Fantrax.com. at Fantrax.com.

Diamond in the Rough: Brevin Jordan

Buy or Sell – Brinson’s Time, Bellinger’s Struggles, and Chris Flexen On Us