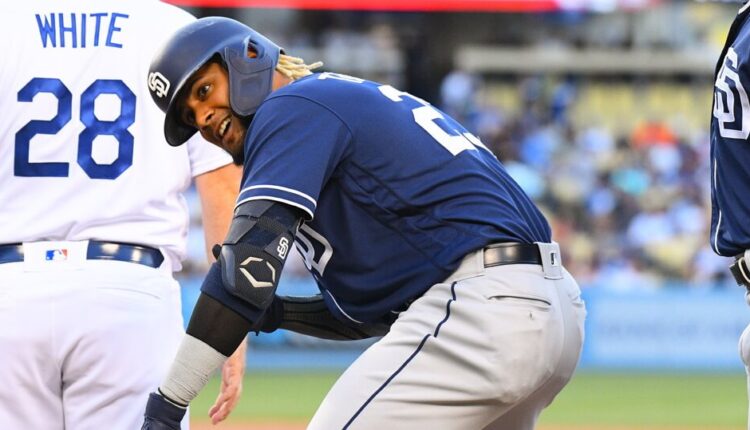 Fernando Tatis Jr. burst onto the scene as a 20-year-old rookie in 2019 and set the world ablaze. Many believed he could not keep up the pace in 2020 and live up to his high ADP. I was one of those non-believers coming into 2020. I felt that Tatis’s high strikeout rate would lead to inconsistent results in 2021. Boy, was I wrong?

Tatis continued his strong start to his career and looked like the clear cut National League MVP before tailing off in September. Despite struggling over the final month, Tatis posted a .277/.366/.571 slash line with 17 home runs and 11 stolen bases during the 2020 season.

Is Fernando Tatis Jr. worthy of being the first overall pick in 2021? Let’s dive into his profile.

Fernando Tatis Jr was fairly unknown when he was traded from the Chicago White Sox to San Diego in 2016. Tatis was ranked 30th overall in the 2015 international signing class, which has produced some elite big league talent. At the time of the trade, no one would have guessed Tatis would turn into one of the best players in all of baseball.

But, Tatis slowly developed into one of the top prospects in all of baseball. For his MILB career, he slashed .280/.360/.487 in 1213 plate appearances. He also hit 42 home runs and stole 64 bases during that time. He progressively improved throughout the minors, but it was still hard to predict his huge breakout upon his MLB debut at 20 years old in 2020.

Fernando Tatis Jr. has yet to play a full season in the MLB, amassing just 143 games between 2019 and 2020. Despite playing just 143 games, Tatis’s stat line is quite impressive. First, his slash line of .301/.374/.582 really shows off his ability to hit for both average and power, while showing good plate disciple and posting a solid walk rate. The power-speed combo is also extremely impressive as Tatis has hit 39 home runs and stolen 27 bases during his short MLB stint. Are these stats sustainable moving forward? Let’s look deeper into his profile.

It is easy for most to say, yes, Fernando Tatis Jr. has legitimate home run power. We are talking about a guy who has hit 39 home runs in 629 plate appearances and is just 21 years old. Head over to his Baseball Savant profile, and I think you can see why he has had such a strong power output to begin his career.

Barrel rate has a strong correlation with home run power. Tatis posted an impressive 13.2 percent barrel rate in 2019 and had the best barrel rate in baseball in 2020 at 19.5 percent. For his career, 15.9 percent is extremely impressive for a hitter who is not even 22 years old yet.

Given the other statistics mentioned, you can probably guess that Fernando Tatis Jr. had the best hard-hit rate in baseball.  His 62.2 percent hard-hit rate was nearly five percent better than Travis d’Arnuad’s 57.8 percent in 2020.

All the numbers are strong indications that Fernando Tatis Jr. has exceptional power that should translate to home runs. 40 home runs over a full season would not surprise me, and Steamer projections agree as they have him pegged for 39 home runs in 2021.

On top of his elite power, Tatis has the high-end speed to go with it, making him a threat on the base paths. He has stolen 27 bases in his 143 career MLB games. Tatis’s sprint speed was clocked at 29.4 feet-per-second in 2019 and 2020, which was good for the ninth-best in baseball.

Beyond being fast and efficient on the base path, I think it is important to look at a team to see if they often run. As you might expect, the Padres stole the most bases as a team in 2020. It is a good sign that they may continue to let Tatis often run in 2021.

Steamer projects 26 stolen bases for Fernando Tatis Jr. in 2021. That seems like a safe bet, given Tatis’s speed, plus the Padres’ willingness to let their players run.

For his career, Fernando Tatis Jr’s triple slash has been an impressive .301/.374/.549. It is quite lofty, but is this a reasonable expectation moving forward?

At first glance into Tatis’s batted ball profile, his ground ball rate stands out to me. His 47.3 percent rate puts him in a scary range of hitters. Yes, plenty of successful hitters often put the ball on the ground, but getting near the 50 percent range is scary. In 2020, ground balls produced just a .238 batting average. Tatis’s ground balls in 2020 produced a .253 batting average, largely thanks to his elite sprint speed.

Many are likely to see Fernando Tatis’s high home runs to fly ball rate of 30.7 percent and say power regression is coming. While it is well above the league average, Tatis is a well above league average hitter. Elite hitters are capable of posting high home run to fly ball rates like this. There may be slight regression in this category, but I would not expect a large drop.

Tatis also has a healthy spray chart distribution. His high percentage of pulled batted balls have gone for base hits. The majority of his home runs were also pulled. Tatis also exhibits good power to the opposite field when he does go that way. 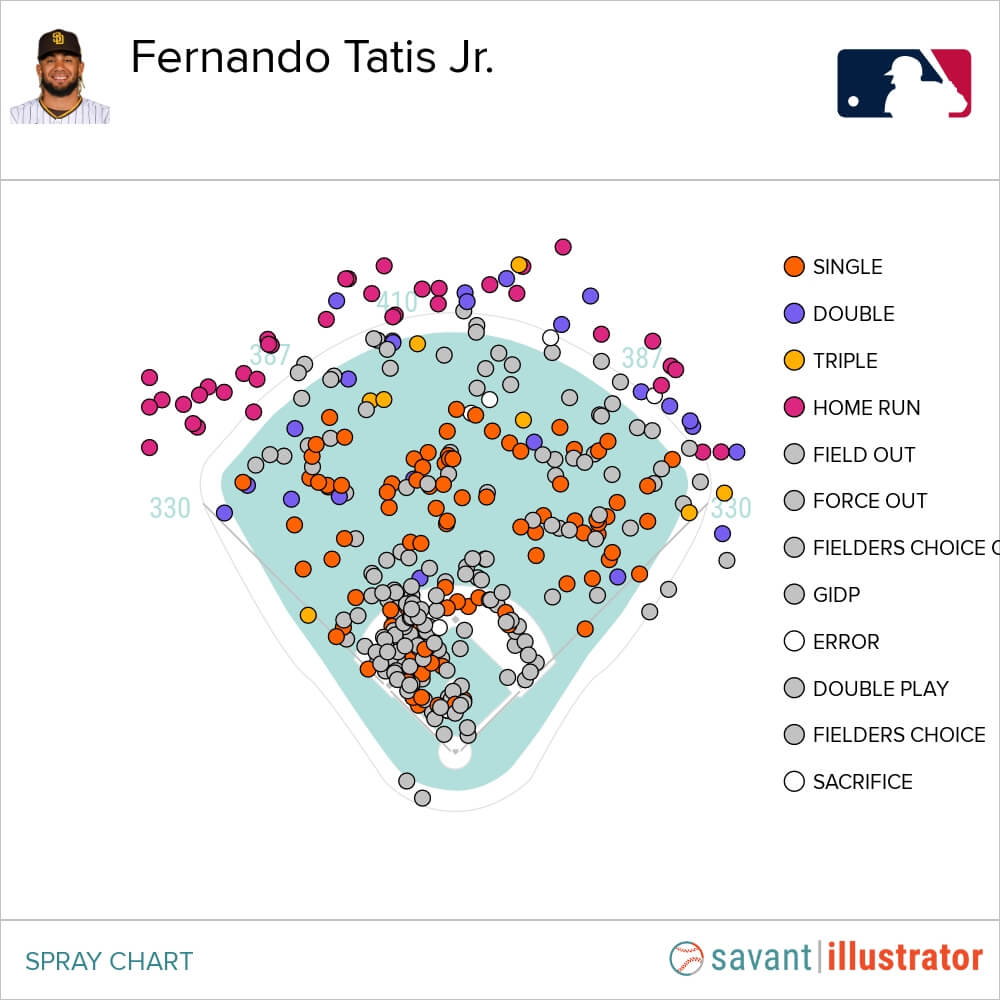 The first concerns I have seen in Tatis’s profile are when it comes to his approach at the plate. His strikeouts have always been a concern, so it is encouraging to see his strikeouts decrease in 2020 as well as a high swinging strike rate. His contact rates are below league average, but when Tatis does make contact, it is elite.

He also has close to league average swing rates and better than average chase rate. Being young, this is an area where Tatis could continue to grow and develop. His strikeout rate dropping from 29.6 percent in 2019 to 23.7 percent in 2020 is encouraging. It was also encouraging to see his walk rate jump to 10.5 percent in 2020.

Overall, the underlying numbers are encouraging. I would not expect Fernando Tatis to hit .300 for his career unless he continues to show improvements in his swinging strike and contact rates. Regardless, I would not be surprised to see him have several hot seasons throughout his career where pulls off a .300 batting average with solid OBP numbers.

Fernando Tatis Jr. has proven in his short time in the MLB that he is a worthy high-end Fantasy Baseball asset. Steamer has Tatis projected for a .285/.362/.549 slash line with 39 home runs and 26 stolen bases. Projections are usually conservative, so it is impressive to see them put these lofty numbers on the 21-year-olds projection line. The reality is, he is projected for those kinds of numbers because he is that good.

Going strictly off 5×5 Steamer projections, Fernando Tatis is projected to be the number one player for Fantasy Baseball. In the #2EarlyMocks ADP, Tatis had an ADP of 3.2 in nine drafts. On Fantrax, he currently has an ADP of 4.17, while NFBC is the highest at 2.88.

He is a consensus top-five pick for 2021, there is no denying that. But should Fernando Tatis Jr. be your number one overall pick? There are plenty of reasons to believe Tatis can outperform players like Ronald Acuña, Mookie Betts, Juan Soto, and Mike Trout. The reality is you can make an argument for any of those guys going first overall, so take your pick. Regardless, Fernando Tatis Jr should have an extremely long and successful career in the MLB.

Who could be the next Fernando Tatis that burst onto the scene? Head over to FantraxHQ and check out Eric Cross’s Top 250 Prospects for Dynasty Leagues and get a leg up on your league mates.