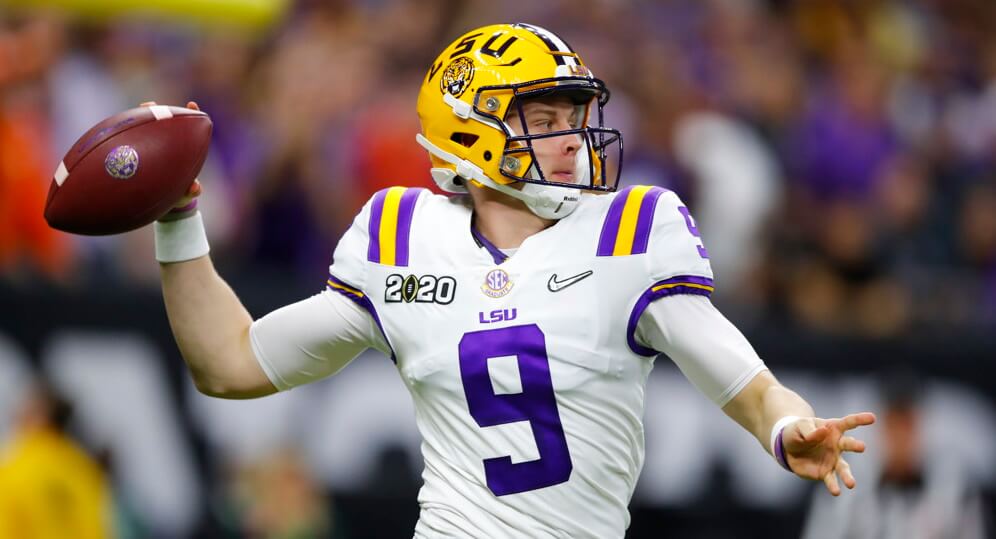 Well, it’s a trial by fire for this year’s rookies, folks. With the canceling of this year’s preseason games comes an added layer of difficulty for this year’s crop of newcomers. The first taste of their onfield experience takes place in their respective Week 1 matchups. It’s a shame because I was really looking forward to a 70-yard run by Antonio Gibson that would have launched his ADP into the stratosphere. Sigh. Oh well. There’s always next year’s preseason draft pandemonium to look forward to. In the meantime, there’s a handful of first-year players poised to be impact rookies from the jump.

Be warned. There will be talented rookies excluded in this article. For the purposes of this piece, I’ll only be discussing rookies with the clearest paths to fantasy dominance.

The new face of the Cincinnati Bengals is stepping onto the field this year with lofty expectations. Thankfully, the No. 1 overall pick in this year’s draft has an impressive arsenal of weapons to work with. From the newly signed Joe Mixon to the returning star, A.J. Green, the Bengals offense is overflowing with talent.

Peering back to the past, five of the last six quarterbacks drafted with the first pick have put up respectable fantasy finishes. Four of these studs finished within the top 13 fantasy quarterbacks on the season. The excluded fifth member of the stud category, Baker Mayfield, finished as the QB16 despite only playing 14 games. To his credit, he set the single-season record for passing touchdowns amongst all rookies. More importantly, in fantasy terms, he was the QB12 through his 14-game stretch of action.

Putting the history book down for a moment, it’s hard not to get excited to see what Joe Burrow can do under center. Reports all throughout training camp have been overwhelmingly positive. While his early-season schedule is somewhat daunting, if you’re someone who pairs two late-round quarterbacks together, Burrow’s ceiling makes him an intriguing prospect.

I get it, there’s a fair share of Clyde Edwards-Helaire fatigue traveling through the Twittersphere. Before your eyes get stuck in mid-roll, give me but a moment to remind you why he should be on your roster.

Andy Reid’s history of manufacturing productive fantasy seasons for his running backs is well documented. Throwing out Damien William’s injury-riddled season last year, the recent past has been nothing short of a fantasy feast for Reid’s ball carriers. Kareem Hunt saw enough work to guide him to a finish of RB6 in 2018 prior to his release. In the year before that, Hunt was the RB4, and in 2016, Spencer Ware finished as the RB17 in 14 games. Also worth noting is that Reid has never drafted a running back in the first round throughout his long career.

There were fierce debates in the following months of the draft surrounding the split in work between Edwards-Helaire and Damien Williams. Enough so that Williams was still being drafted in the first six rounds. Well, guess what folks? Williams has opted out of the 2020 season. With him no longer serving as a threat to Edwards-Helaire’s production, the best the Chiefs have to offer behind him is Darrel Williams. Last year, all that Darrel was able to manage was a measly 3.4 yards-per-carry. Williams, an undrafted free agent, doesn’t possess the kind of talent necessary to limit Edwards-Helaire’s upside.

Indiana’s much-hyped rookie finds himself in a crowded backfield this season. Although it’s likely that he’ll be the leading man for a good chunk of the season, he’s got Marlon Mack and Nyheim Hines beside him ready to siphon away work. The most recent reports out of camp have Mack as the starter, while Hines has been dominating in the passing game. Meanwhile, although Jonathan Taylor has struggled with drops as of late, it’s not overly concerning as he was never going to be their passing-downs guy.

Don’t be overly discouraged when you look at the boxscore of the Colts’ first game. Mack is probably going to lead the backfield in touches. If you’re someone who drafted Taylor, you’re going to feel a little antsy starting the season. Fear not. Taylor’s opportunity is coming.

According to Pro Football Focus, Indianapolis’ offensive line ranked second in run-blocking last season. Mack’s true yards-per-carry figure of 4.2 looks a bit less impressive when you consider the unit creating holes for him. Amongst all rushers, Mack ranked 27th in the true yards-per-carry metric per Player Profiler.

Mack got the job done, but given his circumstance, he didn’t excel. Taylor is an exceptional talent who has all the makings of a superstar. Week 1 against Jacksonville is a mouth-watering matchup for the young rookie if he’s given the start. Don’t rely on that happening, but when he is given the opportunity, watch out.

Things haven’t exactly gone according to plan for the rookie out of Georgia. Early in camp, D’Andre Swift suffered a leg injury that kept him out of practice for more than a week. Needless to say, this wasn’t what the Lions had hoped to see from the heir apparent to the oft-injured Kerryon Johnson. It’s unlikely that the injured rookie will get more opportunities than Johnson in Week 1, but as the season goes he’s expected to eventually get the majority of carries.

Swift’s pathway to a heavy workload hinges on his talent and college production just as much as it does his draft capital. In three years at the University of Georgia, Swift rushed for just shy of 2,900 yards and scored 20 touchdowns on the ground alone. His freshman year was spent behind both Sony Michel and Nick Chubb, otherwise he would have handily eclipsed the 3,o00-yard mark. Adding to his impressive resume, he hauled in 73 catches for 666 yards and 7 touchdowns with a 9.1 yards-per-reception average. Given that the team was so smitten with Swift that they neglected to address other key needs when taking him, you can bet that they plan to feed him the ball.

The other, and unfortunate, factor to consider are the health concerns surrounding Johnson. In his first two years, Johnson has already missed 14 games. He’s dealt with knee injuries, as well as a shoulder and hamstring injury respectively. It’s always unfortunate to speculate on such things, but all it’s going to take is one injury to Kerryon for Swift to become the top dog in Detroit’s backfield and a big-time impact rookie.

It takes a big man to admit when he’s wrong. At least that’s what I tell myself when staring down Cam Akers in my drafts.

Los Angeles’ crowded backfield intimidated me to no end post-draft. Not only is the trusted Malcolm Brown in the way, but they’re also only one season removed from spending a third-round pick on Darrell Henderson.

The fact of the matter is that they spent their first pick in the draft to acquire Akers. Like the aforementioned Lions, the Rams had other units within the team that could have used some love. Spending a second-round pick on Akers tells us everything we need to know about how McVay and the Rams feel about their backfield.

Looking at the current state of things in Los Angeles, Akers and Brown are the only members of the three-back committee likely to see the field in Week 1. Without there having been a preseason, it’s reasonable to assume that Brown will start the game lining up behind Goff. Luckily, it appears as though McVay is content rolling a hot-hand approach, so if Akers hits the ground running he’s liable to receive the majority of work.

After watching him play for four years, we know who Malcolm Brown is as a player. He’s only averaged over four yards-per-carry once in his career. This outlier season materialized over only 43 carries. Henderson, on the other hand, would appear to the favorite to receive most of the work on passing downs. If that aspect of Akers’ game doesn’t develop this year, he would need the goalline work to provide fantasy paydirt. Should (and when) he beats out Brown, he’s a contender for major fantasy relevance if he can get the work inside the five yard-line.

At last, we’ve come to the one and only wide receiver we’ll be looking into today. With Jalen Reagor recently being sidelined, Jerry Jeudy stands on an island for draftable rookies at the position. Personally, I’m a big believer in Bryan Edwards out in Las Vegas. With that said, I’m not suggesting that he should go any higher than your last pick if you’re in a conventional 12-team draft.

Typically, I don’t draft rookie wide receivers. Breakouts at the position don’t often happen until midway through the year, and they’re harder to predict. I’m a proponent of scooping them up off of the waiver wire once they’ve shown signs of life. But, since there are some of you who annually suffer from rookie fever, I’ll dive into the player I feel is most likely to return value on your pick.

Coming out of the University of Alabama, Jeudy is arguably the most fundamentally sound receiver in the rookie class. Boasting an outstanding stat line of 159 receptions for 2,742 yards and 26 touchdowns, Jeudy turned heads all throughout his college career. Recent reports out of Denver corroborate his endless possibility, citing him as one of the stars of camp.

Jeudy has been working out with Drew Lock most of this offseason, and he has the advantage of slotting in behind a No. 1 receiver in Courtland Sutton. Lock’s most dynamic target last year, Sutton, will draw the bulk of the opposing defense’s top coverage, allowing Jeudy to wreak havoc on No. 2 cornerbacks.

Playing behind a star such as Sutton, and in a west-coast offense run by the quarterback friendly Pat Shurmur, Jeudy is going to have his fair share of opportunities throughout the season.

This year’s crop of rookie players contains an abundance of star power. From Dallas’ CeeDee Lamb to Miami’s Tua Tagovailoa, there are plenty of players capable of winding up on a Madden cover within the next five years. Where fantasy is concerned though, don’t jump the gun on your most anticipated young players. Outside of Edwards-Helaire’s ADP, there’s not a single rookie that screams “value” to me, unless Akers breaks out. Both of these guys are more likely to be on my teams than any other of their rookie cohorts. There will be plenty of time to take your Jonathan Taylor’s and Justin Jefferson’s of the world. For now, draft responsibly, my friends.

If you’re in a dynasty league, there’s no better expert to follow than Fantrax’s Meng Song. Check out his latest article on Post-Hype Dynasty Buys: Second-Year Wide Receivers.