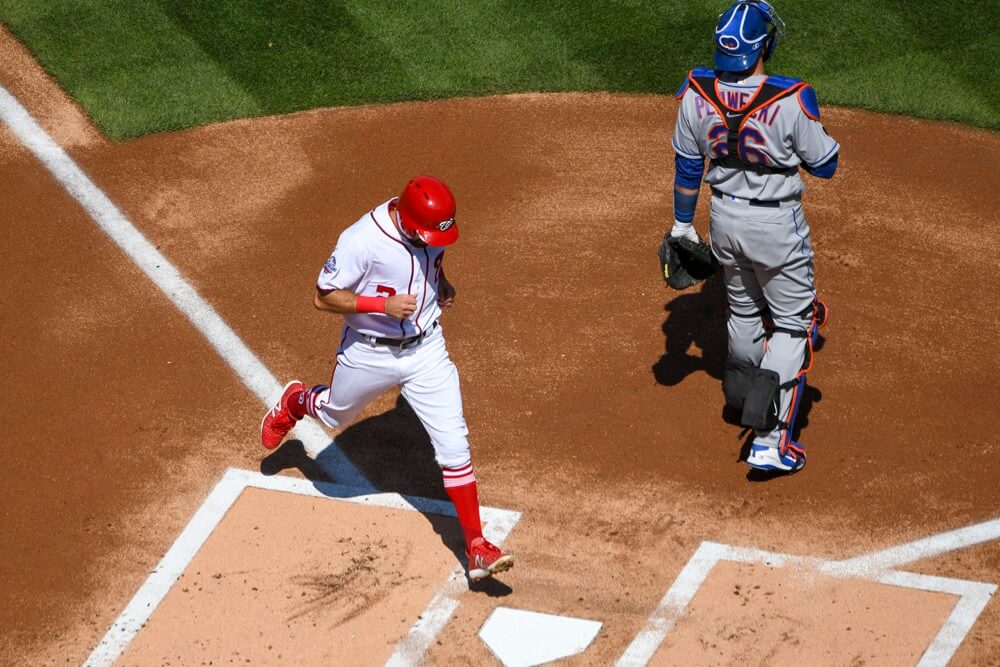 In the third installment of my Hitting the Target series, I will be taking a look at the Runs category. There are several factors that contribute to Runs but the biggest keys are high on-base options, who hit high in talented offenses. This is fairly obvious but in order to score runs, you need to get on base, and you need someone behind you to drive you in. While just following those principles is important, there tend to be players who still manage to slip through the cracks.

In the 12-team Online Championships, the data suggests that you need 85 runs scored per hitter while the 15-team Main Event only required 83 runs per. According to the Steamer projections, only 87 hitters project to eclipse the 80 runs scored mark and unfortunately for us, only six of those 87 are being drafted outside the first 200 names.

Adam Eaton (ADP 206.89): This is the second time that I have mentioned Eaton through the two categories we have discussed. The Nationals will not be quite as good as they were last season but they return most of their World Series winning team and Eaton projects to hit high in the order. While he is not the sabermetric ideal of a two-hitter, Eaton should see most of his time there in 2020. He remains a bargain and one I expect to see appearing on at least one more list going forward. I expect to own a lot of him this year.

Andrew McCutchen (ADP 202.5) was having an incredible season prior to his season-ending injury and is a great buy at his currently depressed price. Roster Resource currently has him leading off for a talented Phillies roster which should lead to elite run totals. He provides a solid base of values elsewhere and as a result, is a fantastic buy at his current price. He is no longer an MVP candidate but he is not someone to overlook in your drafts for this season.

Joey Votto (ADP 267.82) is coming off a dreadful 2020 campaign that saw him drop off from the elite tier of first baseman. His formally elite walk rate has regressed a bit which limits his OBP potential but he should still find himself in his customary two-hole spot to start the year and the Reds have built an interesting lineup around him. While he may no longer be the great player he once was he still has some profit potential here.

Edwin Encarnacion (ADP 201.37) like many on this list is an aging former elite hitter. The powerful righty finds himself in a great spot landing with the White Sox who should be able to provide him with near everyday at-bats. His power is still there and while the average has taken a hit recently, he still provides elite production across three categories. There will be a day where it all falls apart but at this price, it is well worth that risk.

Justin Upton (ADP 239.39) is coming off a miserable injury-riddled 2019 campaign. The slugger dealt with a number of different ailments and was never able to truly get going. Yet if he is healthy he possesses 30 plus homer power with elite run production. Unfortunately, the Angels have a number of hitters who need to be used as DHs, meaning Upton needs to play the field and risks injury yet again as a result. I’ll be betting on him returning to his previously elite levels of production yet again.

The last name on this list might be my favorite in Shin-Soo Choo (ADP 252.86). Choo has certainly suffered from old-man bias in recent seasons but we cannot ignore his fantasy utility any longer. He provides over 20 homers while hitting for a decent average and posting high-end Runs Scored totals. Oh and he chipped in 15 steals last season. He still projects to hit atop the Rangers’ order and should once again provide big profits for owners towards the back end of drafts.

While this is just a subset of extremely valuable names to look to, there is an archetype for high run-scoring talents and finding these stabilizers late in drafts can go a long way to developing a well-rounded fantasy roster. Check back Thursday when I switch back to the pitching side of things to find WHIP stabilizers.