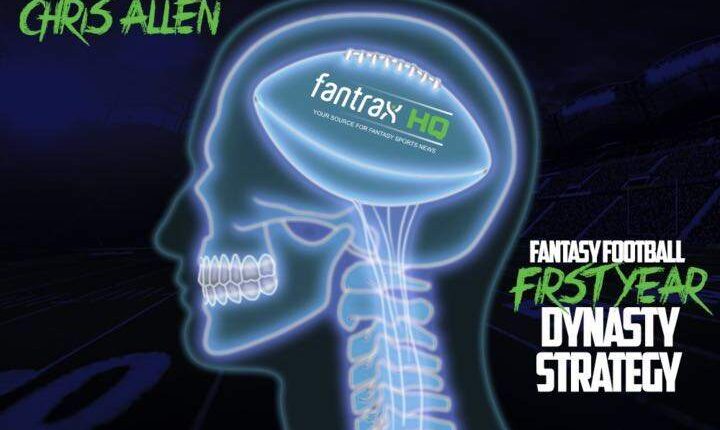 Chris Allen shares his first year dynasty strategy as we get ready for the 2019 fantasy football season.

A Keeper league on steroids.

The closest format to being an actual NFL GM.

Dynasty football falls somewhere in between those two descriptors. That seems like a cop-out for those entering their first year, but dynasty can be as simplistic or complex as you want it to be. Is there nuance? Sure. Advanced strategies or tips you can apply? Absolutely. However, the important thing to remember is: it’s still fantasy football. It’s still drafting players. Setting lineups. Tilting through the games each week.

None of those change.

Even with all the articles, podcasts, and online content, you’re still playing the same game. The complexity comes with the additional variables unique to dynasty. Especially during the draft. Player age, draft capital, upcoming rookie class, and contract situation all help shape our evaluation of a player and, subsequently, their ADP. These are aspects of the game always working in the background that we brush aside in our excitement to watch the games. The news we hear about from ‘insiders’ but can only speculate on the truth. It makes the format appear daunting to first-timers, even exhausting, with the amount of information to consider. There’s also trades for players, draft picks, auction money, FAAB money, NFL division to draft out of, players still in colle—

Let’s just focus our first-year dynasty strategy on the draft for now.

The Game Within a Game

Startup drafts are the best place to start. Clean slate. Equal resources. The possibilities are endless, but you still have your league to contend with before, during, and after the draft. Their strategies that may run with or counter to your own will affect your decision-making along the way. That’s the inherent risk with abiding by a single ideology. Flexibility and adaptability are critical throughout the draft and here’s where a bit of game theory can be applied.

In short, game theory combines the principles of economics with sociology. Supply and demand drive ADP along with the general number of players drafted at each position. Causal inference can force us to select a player ahead of ADP or skip entire tiers as the draft unfolds. Simply put, the league’s draft decisions help shape your own in real time. Drafting becomes a metagame. What you know about your league becomes equally as important as any prior player evaluation. Two quick examples:

Dynasty league chats are buzzing year-round with player discussion, trade polls from other leagues, and players available for negotiation. That’s valuable information! How they feel about players and situations can and should affect your approach to both the draft and future trade talks. So, instead of focusing on players or highlighting a specific strategy, let’s take a step back and use some examples to look at the optimal approach to your first year dynasty strategy.

Most roster construction strategies associated with redraft also have a place within dynasty. Examples like ‘Late-Round QB’, ‘ZeroRB’, or ‘Modified ZeroRB’ have dynasty tweaks to them based on the longevity at the respective positions. The core concepts remain, but the previously listed variables bend the strategy to the new format. But here, we’re less concerned with the strategy and more concerned with how often that strategy will be used by the league. Here’s where game theory comes into play. Let’s use a few redraft examples to illustrate.

The ‘Late-Round QB’ strategy is prominent amongst most analysts. Replaceability at a ‘onesie’ position diminishes the need to sacrifice opportunity cost. It’s a viable strategy, but there’s an edge to be had in these situations. We can hone in on the MFL10 of Death to highlight this.

It’s this commonality that makes industry mocks seem less realistic. Nobody reaching on quarterbacks and nearly 80 running backs and wide receivers selected by the 8th round. However, Deshaun Watson goes at 8.10. That’s nearly 3 rounds past his ADP.

The argument can be made that a wide receiver would have been a better selection given the PPR format. However, identifying and capitalizing on a league-wide trend can be the edge that wins you your league.

Career production and age are two primary components of dynasty ADP for quarterbacks. In Superflex leagues, 20 quarterbacks go off the board within the first six rounds. Over half of that sample are under the age of the 30. Other positions can be filled as the younger talents are acquired early. The quarterback position can be addressed with an older, high-upside quarterback paired with a younger talent with potential.

Draft Scenario: You’ve picked and the picks afterward are only from one or two positions. All quarterbacks or running backs. Positional runs! Without contemplation, the general response is to lean into the run. The rush to fill the position sacrifices opportunity cost. But let’s think about what’s happening. The latest industry SF mock draft can be used to illustrate optimal strategies to deal with this.

By the 5.10 slot, four quarterbacks and running backs had been drafted. The quick depletion of both positions down to QB14 and RB24 left few viable options. Instead of leaning into the run, other positions were looked into for value. Evan Engram was acquired nearly a round past his ADP (46.5). N’Keal Harry was taken at cost (55.8). Your leaguemates can and will tilt the draft board to force other managers to reach. Remember, find value elsewhere and tilt it back. Value and knowing when to pivot can be done by using tiered ranks.

Tiered ranks give structure to the numerical ranks provided almost everywhere. So instead of worrying about drafting the 12th or 13th best player, look at how they produce. Archetype and offensive situation are basic descriptors any first-year manager can use to create their own tiers. As positional runs occur, entire tiers can be skipped for a player within a greater tier of a different position. This general process aligns with the ‘Best Player Available’ strategy. Positionally independent, BPA ensures that you acquire players with the greatest value regardless of roster construction. Even if the player drafted doesn’t play a position of need, they can be traded for someone in a similar tier that better complements your roster.

Simple thought exercises. Concepts related to more casual formats. Easing into your first year dynasty strategy with this approach will make the transition seem like you’re participating in a regular draft.

However, the draft is just one component of dynasty leagues and the ideas presented here go slightly beyond the game itself. Understanding your league and applying game theory to your process will ultimately make you a better dynasty manager. The interactions within your league will always give you clues on how to approach the draft and many of the other actions you’ll have to perform after the draft is complete. Trades, dealing with injuries, and gauging roster strength all come from recognizing behavioral patterns within the league. So, get in the chat, talk with the other managers, and learn how they play this addicting and complex fantasy format. The notes they provide will shape your process for the upcoming season and beyond.

Are you on board with Chris’ first year dynasty strategy? For more great analysis check out the 2019 Fantrax Fantasy Football Draft Kit.