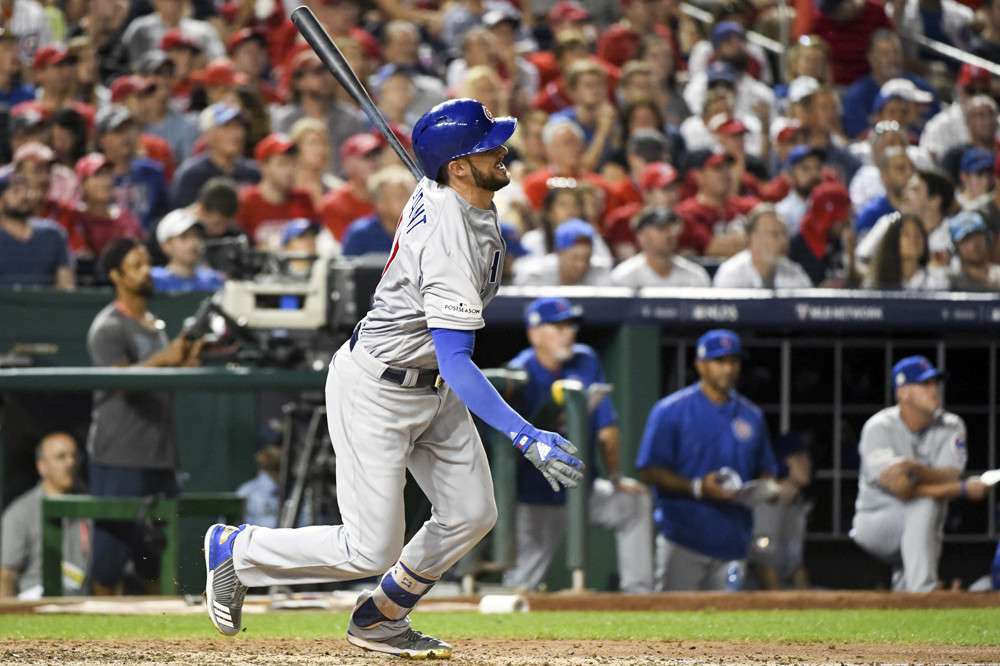 One of the most enjoyable parts of fantasy sports in debating which players are better than others. We’ve all done it. You’re hanging out with some friends, probably enjoying a beer or two, and you get into a long discussion over which player is better than another one. Sometimes it might get heated, but that’s okay. We aren’t all going to agree on every single player. That would make fantasy leagues incredibly boring.

The same can be said here at Fantrax. We have a great group of writers and podcasters (that might not be a word but who cares) who are all very knowledgeable, but we don’t always agree. So we figured we’d have some good ol’ fashion debates about two players that are close in potential 2018 fantasy value.

Today, we dive into the hot corner and compare two third basemen going just four picks apart on average in the second round of fantasy drafts, Kris Bryant and Manny Machado. Both men are elite fantasy assets coming off down fantasy seasons, at least for them. If you’re looking to grab a third baseman in the first half of round two, which player should you be drafting?

This debate got a heck of a lot more interesting once it became known that Machado was moving back to his natural position of shortstop this season. That dual 3B/SS eligibility is going to be a nice addition to his already sky-high fantasy value. But don’t forget that Bryant has dual eligibility, too, with third base and outfield.

In 2017, Machado enjoyed his third straight 30/80 season, but his averaged dropped from .294 to .259 and he crossed the plate only 81 times after eclipsing 100 the two previous seasons. A lot of that can be attributed to an insanely slow and un-Manny like start to the season. When the first half of the season concluded, Machado’s average was way down at .230. However, the All-Star break did him some good, and he bounced back to record a .290 average in the second half of the season. And, what do you know, he started running again! Everyone, jump for joy! He might have registered only nine steals, but anything is better than the goose egg he put up in 2016.

Machado wasn’t the only one who had a down fantasy season in 2017. Bryant was right there with him, but to a different extent. His power production dropped significantly, down to 29 home runs and 73 RBI. However, besides that, Bryant actually improved as a hitter last season. When you look closely at his peripheral numbers, there were minor improvements all over the place.

So, even in a “down” fantasy year, Bryant still made good strides as a hitter, which is encouraging for his 2018 outlook. The one area you can blame for his drop in home runs is his hard contact rate, which dropped from 40.3% to 32.8%. If Bryant can correct that back to his pre-2017 levels, a return to near 40 homers is likely.

So, let’s compare these two players. Three of the five standard scoring categories (HR, RBI, SB) are likely to be near a wash. That leaves AVG and R, both of which are in Bryant’s favor. I feel much more confident in Bryant hitting close to .300 than I do in Machado. Both men are studs in this league, but for the 2018 fantasy season, give me Bryant every day of the week.

Bryant’s credentials go without saying. The fact is, there are no weapons of mass destruction. There never were. It’s only Kris Bryant. And then we have Manny Machado, who, despite a horrific start to 2017, still managed to finish the year with 33 home runs. And now, he is going to re-add SS eligibility. This is huge for me, because not only will that add corner infield status, but middle infield as well. That is extreme flexibility that is too good to ignore.

From July 4 on last year, Machado was a .300 hitter, and every bit of what we expected him to be. And now, his 2017 first half is providing a steep 2018 discount. Consider that he’s not going until 18th overall, and it opens up endless possibilities with how to spend your first (and third) round picks. I hate drafting pitchers early, but it would give you the freedom to be the owner of Clayton Kershaw (should you choose to be so).

Outfield is a position I think is top heavy this year, so why not go there with your first and third picks, should you take Machado with your second? He is the surprise money you find in your pocket when you take that pair of jeans you haven’t worn in a while. Long story short, he is still the third 3rd baseman off the board this year, but his value has dropped 10 spots from 8th to 18th. As ugly as his start was, he still kept that value when the 2017 season was over. Don’t let that start cloud your judgment.

Here we have a case of two players whose values took a bit of a hit after less-than-stellar seasons in 2017. Bryant’s MVP season home run total of 39 fell to 29 in only 30 fewer plate appearances, and Machado saw a .040 drop in each of his triple slash numbers, ending up at .259/.310/.471. Their struggles mean our gain this season, as both guys have the opportunity to be first-round talents with second-round prices (Bryant’s ADP is 12th, Machado 18th).

It’s an interesting debate and one that I’m honestly comfortable taking either side on. I’ll argue for taking Machado in this case, but this early in the draft, it’s all going to come down to draft position. In Manny’s case for a return to prominence, we can see that over his two MVP-caliber seasons in 2015 and 2016, he averaged out to 36 homers, 10 steals (more on that later), and a .290/.351/.518 slash line. 2017 saw Machado line up for a BABIP .036 points below his career average of .301, and virtually all of his contact percentages stayed the same, with him actually making more hard contact than previous years.

Everything points to last year being the outlier in his career, and I’m more than happy to accept that as the correct answer. Machado only gets better this season because he’s also likely going to pick up shortstop versatility, which alone makes him a top-tier talent. His stolen base totals have been very bizarre, with 20 coming in 2015, zero in 2016, and a rebound to nine in 2017. Machado is certainly fast enough to steal upwards of 20, though I can’t bank on that ever returning. I’ll put my own projections down for about 10 steals, and if he beats the total, great.

I can understand preferring Bryant, but I think the added versatility of shortstop you’re going to gain with Machado gives him the edge, as does the seemingly small but very important six-pick spread in ADP. I think cost versus results is going to favor Machado immensely, so he’s my pick of the two sluggers.

When deciding between Kris Bryant and Manny Machado, there is no wrong answer. Both are studs who are already proven and yet still young enough to improve. They have both proven to be rock solid, having played in over 150 games apiece in each of the last three seasons. The rest of their numbers are quite impressive as well:

What’s scary is that both had what could be considered down years, at least compared to their lofty standards. Lost in the league-wide uptick in power was Bryant falling 10 homers shy of his 2016 total of 39. He also tallied just 73 RBI. Machado was terrible in the first half of the year before returning to his dominant self after the All-Star Break. Despite the second half surge, Machado still finished with just 81 runs and a .259 average.

I’m giving Bryant the slightest of edges here for a couple of reasons. First, even though Bryant’s numbers were a bit down last season, the underlying numbers suggest continued growth. His plate discipline continues to improve each year. Bryant has cut his strikeout rate from 30.6 percent in 2015 to 19.2 percent in 2017 while maintaining an elite walk rate.

Bryant has also remained remarkably consistent. Since 2015, Bryant has only had a total of three months in which he batted less than .265. Machado, meanwhile, hit just .217 prior to last year’s All-Star break. Machado’s habit of falling into prolonged slumps is a bit worrisome for a second-round pick. Machado will also be making the move to the more demanding position of shortstop.

I expect Machado to be up to the challenge, but this is another factor which has me leaning toward Bryant in this debate. Give me Bryant by a hair.

It’s hard to conceive that a 6.7 WAR season can be a disappointment, but that’s still how everyone is viewing Kris Bryant’s 2017. He slashed .295/.409/.537 with 29 HR and 111 runs scored, but all anyone can talk about is his crazy-low 73 RBI. Who needs RBI when you have those dreamy eyes? Ok, so dreamy eyes don’t help you in fantasy, but seriously, this is a consistent, elite player.

At just 25 years old, Bryant upped his BB% around 4% while cutting his strikeout rate roughly 3%. His contact rate over his three-year career has gone from 66% to 73% to 78%, while his SwSrt% has gone from 16.5% to 13% to 10%. That’s truly impressive progress from such a young player. He somehow hit .237 with runners in scoring position, which will not happen again. Expect his RBI count to rebound in a big way this year.

There’s not a lot I can say to knock Machado, but Bryant provides a little more consistency. Machado managed to slump his way to a .230 average over the first half of 2017. However, the power was there, and I have no reservations expecting his average to bounce back around the .280 mark along with his 30+ homer pop.

In OBP leagues, this decision is much easier since Bryant walked roughly twice as much as Machado last season, giving him a huge OBP lead. However, it will be nice to get to play Machado at shortstop as soon as he qualifies, which won’t be far into the season since he’s expected to play there every day. All told, Bryant can give you everything Machado can, but with a better OBP.

Thank you for reading and we hope you can use this article to your advantage and get a leg up on your fellow league members.  Got a question that we didn’t cover here? Then follow us on Twitter (handles above) and ask there.