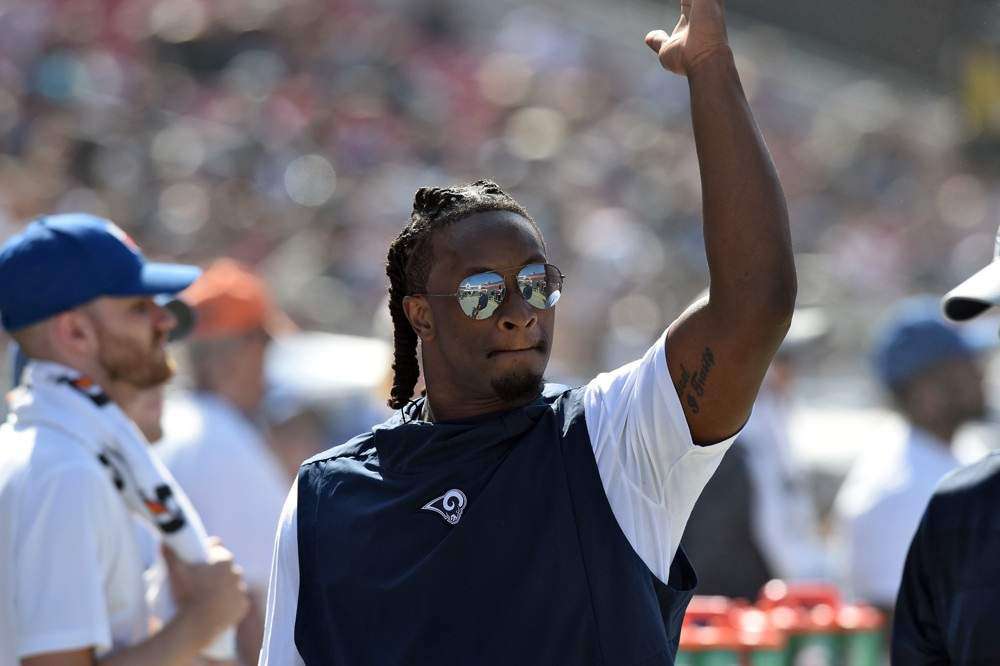 All 12 guys in this First 2019 Fantasy Football Mock Draft are studs in the Fantasy Football community and industry. Each expert has had ample success for years in Fantasy Football. Yet, with limited preparation and the recency monster clouding everyone’s minds, there were good players that slipped through the cracks.

In a 12-team .5 PPR mock draft, A.J. Green went in the fourth round (Chris Meaney, 4.07) and Devonta Freeman left the board at 5.08 (John Laub). These guys are both coming off of injuries, but full health should be assumed at this point. Both of these players will have a third round ADP in August.

There were some great teams formed in this 2019 Early Mock Draft. The full results of the First Fantasy Football Mock of 2019 are further down the page and can give you an idea of which players are higher or lower than you might think. First let’s dive into the minds of the experts and see what they were thinking during their drafts.

I was at the 1.11 spot and considered guys like Odell Beckham Jr. and JuJu Smith-Schuster. That’s how good I think those players are. Beckham dropped to 2.11 and JuJu to the 3.02 slot. Both were criminally undervalued and overlooked. Antonio Brown was on the board and I still had to take him over those guys. The definition of consistency and greatness, even if Brown is traded he is still an elite Fantasy wide receiver.

I would have most likely taken Davante Adams, but he was off the board (and most likely will be at this point in the first round in August drafts). I was targeting receivers because I knew that I could get Nick Chubb on the turn. He is a Top 10 running back next season if he plays 16 games and will provide Fantasy teams with stability and dominate performances.

I used my next two picks on wide receivers (as I am one to do in drafts), so running backs became scarce fast. From rounds 5-8 I snagged Jordan Howard, Jerick McKinnon, Peyton Barber, and Gus Edwards. These are running backs that I feel have tremendous opportunity next season.

Hunter Henry was another guy people forgot about. I grabbed him in the ninth round. He should not drop past the sixth round in 2019 redraft leagues. Since I had an early pick in the 10th round and knew it would be a long time until my next pick, I locked up my quarterback position with Deshaun Watson who could have an explosive year-three season.

The first couple rounds of most early 2019 fantasy football drafts are going to be interesting. Recency bias, 2018 cumulative stats and workload assumptions will play a heavy role in the selections being made. That’s OK given the information we have. My first two picks from the 1.01 should fall in line with what most folks will do from the position. Running backs will most likely be pushed ahead of receivers making a ‘modified Zero-RB’ approach appear viable. Todd Gurley and Mike Evans were fine starts given Gurley’s offensive personnel continuity and the hype surrounding the Bucs. I’m not completely sold on Damien Williams as the Week 1 starter, but I was willing to capture a prominent piece of that offense at that price. Dalvin Cook would have been a better option in retrospect, but it’s close. Matt Ryan at 7.01 was clearly a reach (timeout), but it was interesting how far many of the quarterbacks fell into the later rounds. It’s likely due to the nature of the draft group, but it’ll be something to monitor going into drafts.

My first decision: Take Chubb at 2.1? I didn’t, instead I chose the stud WR duo I prepared for (Julio Jones and Michael Thomas). Next turn, I targeted 2/4 of Carson, Johnson, Mack, and Michel…settling for the last two. I freaked out  when my entire eight-man queue dried up in the eight picks before the 5-6 turn. Taking Njoku wasn’t ideal, but I had to if I was going to get him with Henry my “plan B” at TE. I ended up filling out my flex with (Robby) Anderson and Penny, but feel I could’ve done better there. The Pack stack of Rodgers-Allison could pay big dividends. Last four picks were simply RB depth.

I was shocked the league allowed me to have Lev Bell and his now replacement James Conner. Bell should be fresh, paid, and dominate touches wherever he ends up (hoping Colts, but cool with Texans or Bucs as well). As for Conner, the Steelers just pump out RB1s. Bell, DeAngelo Williams, Conner, Jaylen Samuels. It doesn’t matter. I was even more shocked the league allowed me Keenan Allen and Amari Cooper in the 3/4 rounds. Allen is a proven WR1 while Amari blossomed into one with Dallas. The rest of the draft was filled with what I found to be good values such as Mark Ingram in the 5th, who could be a workhorse if he leaves NO, Julian Edelman in the 6th, Golden Tate in the 8th, as he likely leaves Philly. Another great value was Cam, who is constantly a Top 4 QB, and was this year before the shoulder injury. I finished my draft with RBs who could see a larger role in 2019, whether it be due to injury (Royce Freeman), a new coach (Jamaal Williams) or a change in scenery (Spencer Ware). Normally not cocky, but man I loved this team

The full results of our First 2019 Fantasy Football Mock Draft are below. The picks are displayed by round. You can move through the rounds by clicking ‘next’ and ‘previous’ at the bottom right of the table.