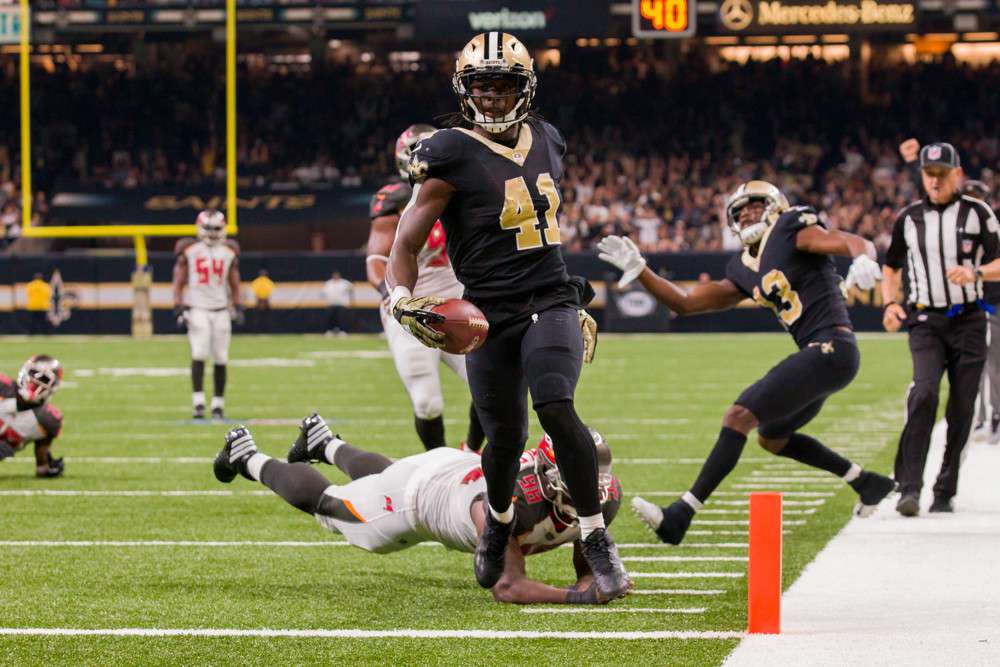 “Rising” and “falling” does not necessarily mean “good” or “bad” in fantasy. If a player’s average draft position is rising, his value is assumed to have dropped. Conversely, if a player is falling in terms of draft price, then he can be considered a value if his production is projected to out-perform his draft-price.

Here are this week’s risers and fallers. All ADPs are based on PPR scoring leagues per fantasyfootballcalculator.com.

OK, it’s only May and everyone is totally freaking out. Alvin Kamara, last year’s free lottery ticket to a fantasy football championship, is now without question the lead dog for at least the first four games of the season. Mark Ingram has been suspended for four games for violating the NFL’s policy on the use of performance enhancing drugs. Even before this news broke it has been documented that Kamara is the future of this backfield and that Ingram is going to be used to complement the second-year star.

Kamara was electric last season rushing for 728 yards on 120 carries and catching 81 passes for 826 yards with a total of 13 touchdowns. He was already going to be a first-round pick, but now Kamara warrants a serious Top 5 ADP consideration. Although Sean Payton was vocal about not increasing Kamara’s workload for the first quarter of games in 2018, he will still be receiving the bulk of the touches undoubtedly. Veteran Jonathan Williams will most likely be the guy to take on Ingram’s role, and he has proven success as a goal line back for the Bills. A rookie out of Louisiana Tech, Boston Scott, will relieve Kamara on some passing downs, as he is a satellite back, but Kamara is the better player for that situation.

Taking Kamara as a top five selection in redraft leagues will not be justified by his workload in the first four games of the season, however. His production will potentially increase even when Ingram returns to the lineup. Ingram has already been on record as not happy about the direction of the Saints, and he will be in a contract year in 2018. This will most likely be Ingram’s last season in New Orleans, and as reported by Ian Rapoport, Ingram would have been shopped this offseason if the suspension was not looming. There is a real chance that after Ingram serves his suspension that the Saints will look to trade him and role with the backfield they have established during the beginning of 2018.

With 1,000 yards rushing and 1,000 receiving rushing as a realistic possibility for Kamara in 2018, the hype is real and he should be a hot commodity come draft day.

#Saints RB Mark Ingram hasn’t been around the facility during conditioning and he won’t be around for OTAs, source says. This is also why New Orleans hasn’t shopped him. The looming suspension, which has been hanging over him for several weeks.

After the NFL Draft, Christian McCaffrey was like a WWE wrestler who just tossed everyone out of the ring during the Royal Rumble, standing in the middle of the squared circle waiting for the next guy to come down the ramp. For awhile, no theme music played, and McCaffrey was looking around triumphantly as he was potentially in store for 300 touches in 2018.

Not so fast. C.J. Anderson, out of nowhere, came running down the ramp and inflicted a pile driver (aren’t those banned, J.R.???) to McCaffery to the tune of the possibility of a 200-touch season. Anderson’s potential 200-plus touches does take away any thought of McCaffery going in the first-round in redraft leagues, and he is currently going in the middle of the second round. As minicamp approaches, McCaffery’s ADP could slip even further. Jonathan Stewart had 198 carries last season and Anderson steps into the same role.

McCaffery had 197 total touches (117 carries and 80 receptions) in his rookie season, and that workload should increase. His role in the passing game should be similar, but look for McCaffery to be used more on first and second down, especially out of the shotgun. The run/pass option is a big part of the offense in Carolina with Cam Newton, and McCaffery is the perfect back for that formation. The second-year player out of Stanford still has RB1 upside, but the addition of Anderson could see his ADP drop to as late as the third round, which would be a bargain in redraft leagues.

Sanders had a strange season in 2017, but the Broncos quarterback situation was anything but stable. They rifled through Trevor Siemian, Paxton Lynch, and even Brock Osweiler. With the quarterback shuffle, Sanders only managed 47 catches for 555 yards and two touchdowns in 12 games. Prior to last year, Sanders had achieved three straight 1,000-yard seasons (two of which were with Peyton Manning) and was a fantasy asset as a WR1/WR2.

Sanders just turned  31, but he still has juice left. Case Keenum was named the starter officially last week and Sanders was on record saying he is relieved to go into camp without a quarterback controversy. Keenum was good enough last season to provide fantasy value for both Adam Thielen and Stefon Diggs. Sanders fits the profile of Diggs (although Diggs is only 24) as a burner who can stop on a dime and run clean routes.

There will be a lot of hype for Broncos draft picks Courtland Sutton and DaeSean Hamilton, which should drop Sanders’ stock as drafts approach later in the summer. This will be good news as Sanders’ role as the outside receiver opposite of Demaryius Thomas will not change, barring injury. Sanders has 1,000-yard upside in this role and is a prime candidate to fall in drafts, making him a steal in fantasy football for 2018.

Brate was the TE8 last season with 48 catches, 591 yards, and six touchdowns despite Jameis Winston having a down-year in which he missed three games. The Buccaneers just signed Brate to a six-year, $40.8 million dollar contract. The O.J. Howard bandwagon is ready to explode, as the truthers want Howard to be an elite tight end in this league. He has the size, skills, and athleticism to be just that, however Brate is not going anywhere for a long time. He is currently a 14th round pick according to his ADP and is the quintessential late-round tight end to grab for that price. While Howard should see an increase in targets, Brate will be even better than last year with a healthy Winston.

As the offseason progresses, Brate’s stock should rise slightly, but he can still be thought of as a guy who everyone is overlooking because the perception is that Howard is going to demand all of the targets. That is simply not true as the Buccaneers prefer Howard in pass-blocking situations because he is the superior of the two players in that skill set. The Bucs have invested in Brate, who is still one of the best tight ends in the league in the red zone. Eight touchdowns is realistic for Brate, who could be a TE1 again as he and Winston have an established chemistry when it comes to scoring touchdowns.