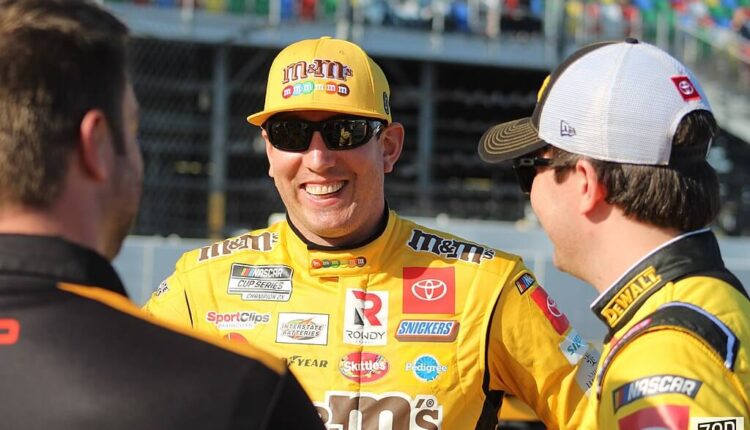 Hey, fantasy baseball fanatic! Don’t hang up on me just yet. Up until very recently, I was you. You, the one that can’t possibly fathom why anyone would play fantasy NASCAR. Or, better yet, the one who didn’t even know that fantasy NASCAR existed.

I understand your trepidation and/or obliviousness. I, too, have said the inevitable slew of disbelieving phrases regarding racing as a viable option for my fantasy focus. But I promise you, DFS NASCAR can make even the most hardcore hater at least somewhat interested.

Many of these statements and feelings come from being unable to put it into your wheelhouse – that beautiful world of xFIP and wOBA, of saves versus holds, and why anyone still plays in a two-catcher league. This is why I had the bolt-of-lightning-flux-capacitor-level idea of comparing NASCAR’s current drivers to the baseball teams you know and love.

Just as teams have a sense of personality, so do these 30 drivers and their racing teams. And yes, there are racing TEAMS, which took me a while to comprehend.

We’ll look at the American League of fantasy NASCAR Drivers in Part One, and Part Two will cover the NL. I invite you to ask questions, open the discussion further, or ask me which NASCAR stat best matches with exit velocity. I’m available at @thewonkypenguin.

When I started watching racing not so long ago, it took me less than 100 laps to identify Kyle Busch as the Evil Empire of NASCAR. Both have sky-high confidence levels and egos to boot. When something goes wrong for Busch during a race, they’ll check in on his radio to hear the ghost of Billy Martin swearing in a race car. His fans have no problem dressing in full bright-yellow, candy-themed garb while lording their superiority over you. He just won his 60th race all-time, and I am only surprised that number is not divisible by 27.

Larson is the kind of driver where, at first, you’re cheering for him because it’s fun to see him win. And then he keeps winning. And wins some more. And pretty soon, you’re cheering for anyone else to take him down a peg or two because he becomes so dominant for a time. Their fans point to Kyle Busch and say, “At least we’re not him!” It only lasts so long before you’re like, “Man, this Kyle-Coast bias is annoying.”

Since Toronto is the Juniors ‘R Us of MLB, it seems fitting that William Clyde Elliott, II, be in this stacked eastern division. Chase drives the No. 9 Chevrolet, and he’s just always at the top of the standings and driving well, the way his father used to do. He’s been voted Most Popular Driver four years running, and it’s not a mystery why. He’s a great driver, he’s young, and he’s objectively cute. That sounds like the NASCAR version of the Springer/Bichette/Vladdy Show to me.

Bell is an unassuming driver. He looks like a 20-year-old rookie second baseman who just got called up from Durham, so the big-league squad could save money by unloading the veteran. Every advanced statistic favors him, and he specializes in little things that other teams never focus on. And because he is in the same division as the Big Three, he is easy to miss in the background until he passes them, and the only shade they can manage is, “Shouldn’t you still be in high school?”

Lajoie averages about one Top 10 finish per year. In 2022, he even has one Top 5 finish. Otherwise, he floats around the back third of the race. Like the occasional Cedric Mullins or Ryan Mountcastle, you’ll roster him because his salary is cheap, and he obviously has some talent. That is when he inevitably crashes out or has a flat tire in lap 30 out of 500, crushing your fantasy NASCAR team in any given week.

I live in Minnesota, and I admit that maybe 50% of this pairing comes from the fact that Byron looks like approximately 18 former Twins middle infielders. He is having an incredible year thus far and always seems to be in the race near the end. Maybe the best part, though, is that Byron can completely ignore pitching without it costing him. And in NASCAR, he doesn’t have to win a head-to-head race with the Yankees to advance.

Cindric is a NASCAR Cup Series rookie this year and introduced himself by winning the Daytona 500. Driving for Team Penske, he plays the role of the younger, overachieving brother to teammates Joey Logano and Ryan Blaney. Growing up a Cubs fan in Iowa, I always felt like the White Sox were treated like the “younger brother” to the North Siders by the media (and WGN specifically). But man, you gotta watch out for those younger siblings because, at some point, they get too good and pass you by.

Austin Dillon and the Tigers are both climbing the ranks of contenders in their respective leagues. It could be a long time for one (Detroit sits at 13-23 on the year), but Dillon has arrived. There’s also a sense of history – his grandfather was Richard Childress – that rivals Detroit’s storied 122 years as a baseball team. The Tigers are a team that is easy to cheer for when they’re doing well, as it is for Austin in fantasy NASCAR.

And we’re back to younger brothers as Ty is two years younger than Austin. While he does not have the same number of accomplishments, he has had some success, just as the Guardians lack the same storied past as the Tigers. Cleveland often emphasizes youth development and has the occasional out-of-nowhere success story. The comparison to the big-league club stops there since we can assume that Ty’s team is willing to spend more than $70 on his car, engine, pit crew, etc.

This pairing is brought to you by my wife. She thought NASCAR was boring until Talladega 2020 when Almirola ended third, crossing the finish line backward. She almost fell off the couch, and it was only the following week when she began playing fantasy.

In 2015, the Kansas City Royals won the World Series despite playing a type of baseball last seen in the Dead Ball Era. Everything that sabermetric wisdom said to stop doing, they did with impunity. “So it’s sort of like they won the World Series backward,” my wife explained. “Almirola is totally the Royals.”

When I try to rattle off all 30 MLB clubs (on those frequent occurrences when someone asks me to rattle off all 30 MLB clubs), the Rangers are inevitably the one I forget. The same goes for Buescher. Occasionally, I’ll be making a DFS lineup, and a Rangers stack looks good, so I throw them in. And later, I’ll be like, “Wait. Why would I do a Rangers stack?” We do it because they’re often affordable, round out a lineup, and don’t complain about their role. My friends – that is Chris Buescher.

Justin Haley can anchor the Prospect Club of NASCAR. The 23-year-old matches well with the major league baseball team that loves trading anyone that could be mistaken for a veteran for the promise (and cheapness) of youth. He already won a race in his debut season, and my guess is that in a few years, he will be a stellar option (at which point he will be traded to the Yankees, but I digress).

As the adage goes, “Shohei Ohtani struck out seven, and Mike Trout went 3-for-4 with a homer, and the Angels lost 6-3 to the Houston Astros.” Bubba can have all the luck and fortune in the world for 398 miles of a 400-mile race, but he can’t have all 400. The Angels can have perhaps the two best players in baseball and yet never even sniff the playoffs.

Suarez is an exciting, under-the-radar driver who routinely finishes in the Top 10, which will surprise you every time it happens. Similarly, Seattle’s good years always sneak up on everyone until suddenly, they’re in the playoff hunt the last week of the season. Once he has your attention, though, Suarez is fun to watch and fun to deploy in fantasy NASCAR DFS, where he is criminally underpriced most weeks. He is more Julio Rodriguez than Jarred Kelenic at this point, too, which is inspiring.

Is it low-hanging fruit to compare the driver who found himself in hot water for perceived cheating earlier this year to the Astros? I’m sure it is, but there are other apt similarities. Keselowski is a no-holds-barred guy, unafraid of calling out other drivers for any reason (right or wrong), and he can be so, so good. He can also wreck out half the race and limp off track, angrily banging the trash cans on his way to the garage. Volatile and dominant – those are Astros’ qualities, no doubt.

Here ends the AL. Tune in Thursday for the National League, and give fantasy NASCAR a shot, my friends. Please help me build that Statcast site for tire spin speed and find the fantasy joy of winning money, one left turn at a time.