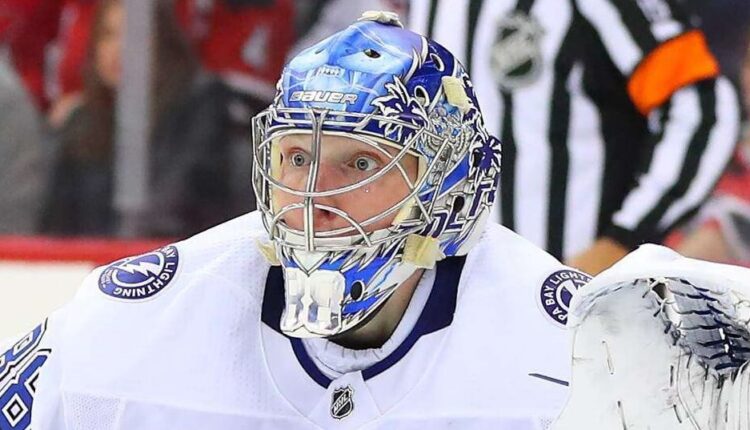 Writing the 2022-2023 fantasy hockey goalie rankings is an exciting exercise filled with hair pulling and yelling at my computer screen that, “I don’t know where the break in this tier is!” Par for the course, I suppose, as all rankings contain an inherent argument built right into it.

The very first thing I did when I began writing about fantasy hockey was practice spelling “Andrei Vasilevskiy.” That “i-y” combo at the end threw me for a loop at first, and I got tired of looking it up every time I had to write a news piece on him… which was quite often, as it would be for the consensus No. 1 goalie in hockey.

While experts can get into arguments about every other position – though going against Connor McDavid as the top center takes some finagling and a few somersaults in mental gymnastics – the top goalie argument seems pretty moot. Vailevskiy, the 27-year-old Russian, has a career .921 save percentage and 2.36 GAA, and came within two wins of giving the Tampa Bay Lightning their third consecutive Stanley Cup.

Indeed, the best argument is simply whether or not he is in Tier 1 alone.

Look, no one wants to really think about goalies in fantasy hockey. They are to the game what catchers are in baseball. Five or six will be strong contributors, five to ten will be usable, and the rest are entirely matchup-dependent or unrosterable. The strong options will cost you a high pick when so many strong skater options are still on the board and much more appealing.

Can you build a successful fantasy team from in the crease outward? Sure. Is it easy? Goodness no.

Before the drafting begins, ensure you know how many goalies your league rosters, how many can start, and what the minimum number of starts is per week/season. With that, here are our preseason 2022-2023 NHL Fantasy Goalie Rankings.

Tier One: Set, Forget, No Regret

As we discussed above, Vasilevskiy appears at the top of this list as the excellent year-in and year-out option. However, last year’s Vezina Trophy winner Igor Shesterkin deserves Tier One treatment, even without the same track record length as Vasilevskiy. Shesterkin’s 2021-2022 season illuminated just how dominant he can be, finishing with a 2.07 GAA and an otherworldly save percentage of .933. Fantasy managers can expect a bit of regression for the 26-year-old, but they also won’t be judged for taking him as the first goalie off the board.

While this is my preferred ranking, you could put these eight guys into a ping pong ball machine and order them however they come out. The presence of Semyon Varlamov often diminishes Sorokin’s value, but that doesn’t make the latter a worse goalie. His 29.8 goals saved above average finished second only to Shesterkin, and all fantasy teams could benefit from his 2.40 GAA and .923 save percentage.

Connor Hellebuyck is the face of “Goalies drafted too high who burned you in 2021,” but he should rebound nicely for this season.

Juuse Saros and Tristan Jarry are the clear-cut workhorses for their teams, while Jacob Markstrom and Sergei Bobrovsky should rack up wins with the teams surrounding them. Frederik Andersen is still dominant and worthy of being a No. 1 goalie, but fantasy managers must have a backup plan with his injury history.

Jake Oettinger is going exceptionally high – I’ve seen him go as high as Goalie 3 – which makes some sense in keeper/dynasty leagues, but beware of the price bump he is receiving due to his dominant postseason (1.81 GAA/.954 save percentage) versus his regular season (2.53 GAA/.914 save percentage).

Players in fantasy are often labeled as having a “high ceiling” or a “solid floor,” which is just fantasy analysts’ way of saying “Sexy and risky” or “booooooooooooring.” Tier Three features goalie rankings based on the idea of having a “solid floor.” While Jeremy Swayman could have a high ceiling, the presence of Linus Ullmark puts him squarely back into floor territory. Thatcher Demko should be better than he was last year, but the Canucks remain in unknown territory after having been disappointing last season, which impacts his output.

Jack Campbell, Darcy Kuemper, and Marc-Andre Fleury are the elder statesmen on the list. They aren’t going to shine or compete for the Vezina, but they shouldn’t burn you too often. Just don’t reach for them beyond their ADP.

*Author’s note: The original rankings left out Elvis Merzlikins for no reason other than a glitch between my rankings page and actually writing the article. My apologies. I have him ranked 15th overall and see him as a solid “floor” goalie heading into the season.

This is where the 2022-2023 goalie rankings require more prediction than historical reasoning. Each player on this tier has a lot of positives and a lot of questions. We’re unsure about the team makeup or how new coaches will approach their roles. But there is something to like about each one of them, even if every single one should only serve as a Goalie 2 or 3 on your roster.

You’ll see netminders from this tier in our weekly Goalie Grabs list for favorable matchups in which you might consider streaming them. Otherwise, I’d stay clear of this bunch.

Happy drafting, everyone! If you would like to discuss or argue with me about my rankings using only GIFs, hit me up on Twitter at @thewonkypenguin. And, as always, good luck!

Goalie Rankings were based on Wins, Losses, GAA, Save Percentage, and team situation.

Check out Fantasy Hockey Life on the Fantrax Podcast Network