Fantasy Football Winners and Losers from the 2019 NFL Draft 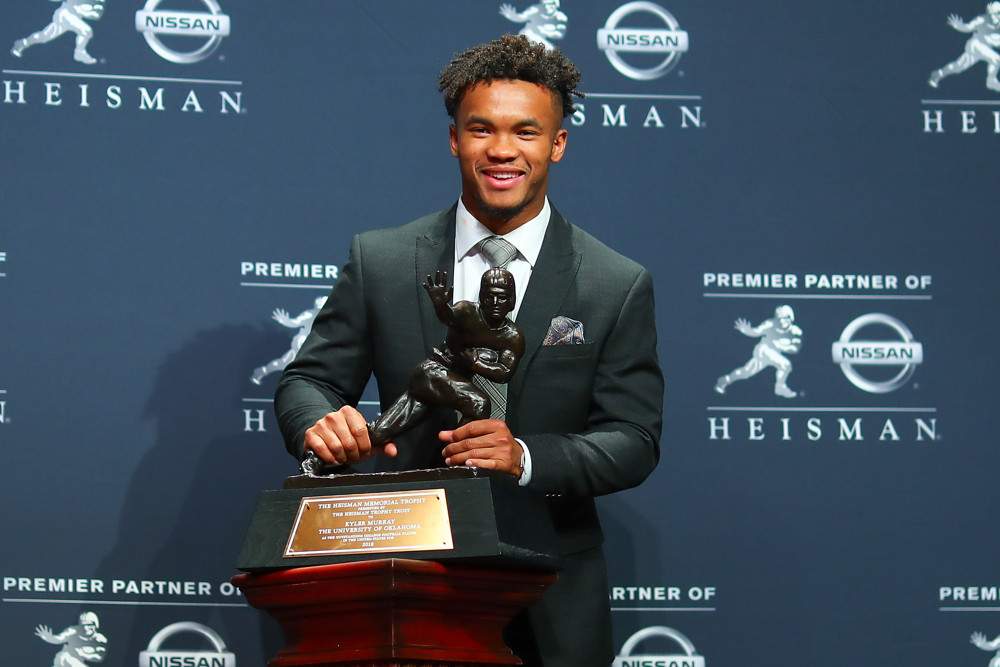 This past weekend, the city of Nashville was transformed from the place to have a bachelorette party into the center of the NFL universe when the 2019 NFL draft came to town.

Some folks were apparently not amused even a little bit. They’ll get over it.

The 254 players selected over three days in Nashville will have an enormous impact for many years to come—both on the NFL and fantasy football. There were quarterbacks, running backs and wide receivers taken in the 2019 draft who will become long-time fixtures in fantasy football leagues—and others who will soon be forgotten.

Now that the dust has settled on another NFL draft, let’s take a look at one player at each position whose fantasy value was boosted the events in Nashville—and another to whom the weekend wasn’t nearly as kind.

Fantasy Football Winners and Losers from the 2019 NFL Draft

In a development that surprised exactly no one, it was Murray who was the first overall pick of the 2019 draft. And the diminutive Heisman Trophy winner told reporters (via Herbie Toepe of NFL.com) that he’s ready to get to work turning the Cardinals around.

“As a kid, that’s what you dream of going to an organization and being that guy, turning the program around, organization around, winning Super Bowls,” Murray said. “Like I said, I don’t shy away from hard work. I feel like I’m not here to lose games or go through the motions. I’m here to change things up, so I’m ready to go. I can’t wait.”

This might seem like low-hanging fruit, but Murray isn’t just far and away the rookie quarterback with the best odds of making a short-term statistical dent. He’s also been placed in a much better position to succeed in Arizona than Josh Rosen was a year ago after the Cardinals hired an offensive-minded head coach in Kliff Kingsbury and added passing-game talent by selecting wideouts Andy Isabella and Hakeem Butler in this year’s draft.

Not long after Murray was drafted, the Cardinals shipped last year’s No. 10 overall pick to Miami for the draft-capital equivalent of a bag of beef jerky and a six pack of Natty Light. But as the MMQB’s Robert Klemko reported, Rosen isn’t crying over spilled cheap beer.

“My heart really didn’t believe it was going to happen until a couple of minutes before it happened,” Rosen said. “Common sense sort of kicked in then, but my heart didn’t want to believe it. I’m fine. It’s not like I’m some child soldier in Darfur. I’ve had it pretty good. I think it’s time I had some legitimate adversity handed to me.”

Rosen’s right about one thing—he’s had adversity handed to him. The situation the second-year pro finds himself in in Miami isn’t any better than the one he was in a year ago in the desert. The Dolphins have the look of one of the NFL’s worst teams in 2019, with a shaky offensive line and even shakier skill-position talent.

Good luck with that.

After the Bears shipped away Jordan Howard in the offseason, the team needed a new early-down back to complement Tarik Cohen. But as Cam Ellis reported for NBC Sports Chicago, in taking Montgomery in the third round last Saturday, Bears head coach Matt Nagy believes he may have done a lot more than that.

“When you have guys that can play all three downs, it’s nice for the play caller and it’s nice for the offense. The biggest thing is that you just see who he is as a football player,” Nagy said. “The amount of times that he makes defenders miss inside the tackle box, he extends runs with his sheer power. He has a tremendous ability to feel when that next guy’s coming.”

Howard was shipped to Philly in large part because he was a terrible fit in Nagy’s offense. Montgomery profiles as a much better one—while he’s not blazing fast, he’s a well-rounded runner and receiver who can make people miss in the open field. It’s not at all hard to imagine Montgomery beating out Mike Davis for the early-down role in Chicago—or to imagine him leading the team in backfield touches as a rookie.

It’s a pre-draft ritual for draftniks to make player comparisons—to compare the skill-sets of incoming prospects to players already in the NFL. And as Sal Maiorana reported for the Rochester Democrat and Chronicle, when Daniel Jeremiah of NFL.com looked at Singletary’s tape he saw current Bills starter LeSean McCoy.

“I have him as the second-best back, and actually for comparison, I wrote down he’s got a little Shady McCoy to him,” Jeremiah said. “So he can make you miss. He does a great job in tight quarters. He could be in a hallway and you can’t get a finger on him. Just real loose, nice little nifty jump cut that he uses. I don’t know that he really has that big time, big time top speed, but we saw some of those same comments made about LeSean when he was coming into the draft, and we know how that worked out.”

Singletary is admittedly a talented young tailback who was wildly productive at Florida Atlantic. But to say he landed on a crowded Bills depth chart is an understatement. In addition to McCoy, the Bills also added both Frank Gore and TJ. Yeldon in free agency. It’s possible that Singletary will muscle his way into a significant role as a rookie. But it’s equally possible that Singletary’s going to find touches difficult to come by in the early stages of his career.

After Campbell lit up the Big Ten for over 1,000 yards and 12 scores in 2018 and peeled off a 4.31-second 40-yard dash at the combine, it wasn’t a secret that the Ohio State standout is fast. But Colts scout Chad Henry told Zak Keefer of the Indy Star that the team saw more in the 6’0″, 205-pounder than just speed.

“Obviously,” Henry said, “you gotta play in the offense you’re in, and you gotta do what they ask you to do, but the key thing for us with this guy is speed. You can really feel it, feel like we can do a lot of things with him vertically. He’s a great kid, he’s worked really hard, football’s really important to him. And he’s already shown improvements in terms of multiple routes. So we’re really looking forward to working with him and expanding his role that way.”

Campbell’s far from a finished product as a route-runner. But he’s got a good chance at seeing significant snaps (and targets) from the get-go in a receiving corps that includes a superstar in TY Hilton and a veteran free agent addition in big-body Devin Funchess. Add in a quarterback in Andrew Luck who isn’t shy about challenging defenses vertically and Campbell’s ability to hurt defenses after the catch and this landing spot is about as close to a best-case scenario as you’re going to get.

Brown developed a reputation at Oklahoma as a small receiver who regularly made big plays. Per Clifton Brown of the Ravens website, Baltimore OC Greg Roman sees the 5’9″, 166-pound first-rounder as key part of the team’s offense in 2019.

“We can play him inside, outside, short, deep, all kinds of things, and we’re really only limited by our imagination,’ Roman said. “He brings that kind of versatility to the Ravens. So, very thrilled. I would just close in saying that on his visit, I got an incredible feel, I think, as did a lot of people, about just the grit and toughness and competitiveness that really emanated from him and what you’re looking for. So, can’t wait to get to work with him.”

The Ravens undoubtedly have plans for Brown—he was the first player at his position selected in 2019. But the cold hard reality is that Brown’s fantasy upside is all but certainly going to be capped because of the team he plays for. After Lamar Jackson took over at quarterback last year in Baltimore, not one team in the NFL ran more or threw less than the Ravens, who finished the year 22nd in the NFL in passing.