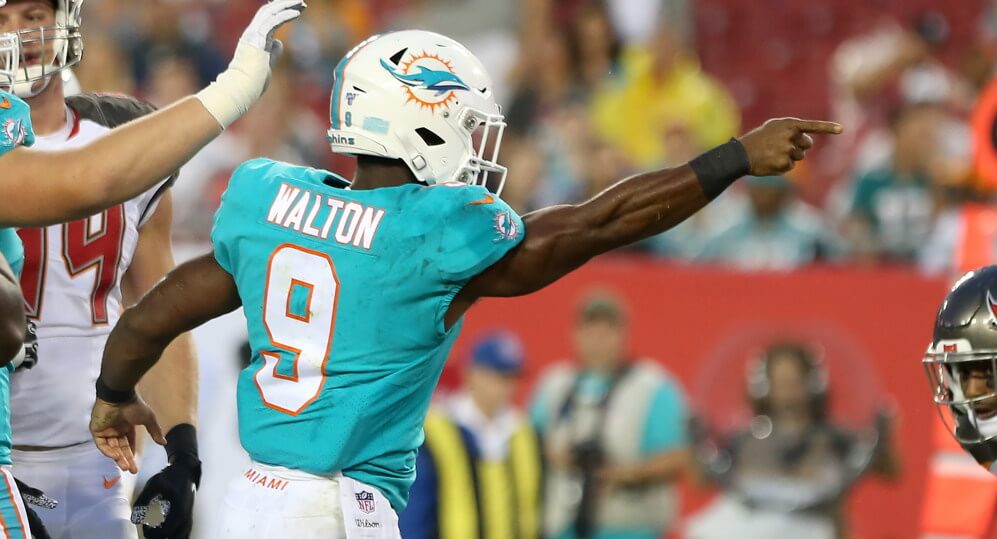 Can I just say, how crazy is it that we’re in Week 9? That means the fantasy season is winding down to an end which is truly miraculous since it feels like it just started. These weeks are more imperative than ever though, as many of you have an abundance of bye weeks over the next three weeks. That means hitting the waiver wire is imperative and hopefully, we can get you guys some more good pickups this week. With that in mind, let’s get into our Week 9 waiver wire picks.

Drake hasn’t done a whole lot on the field and his absence from Monday Night’s game against the Steelers would indicate that he has played his final game with Miami. That’s spectacular news for a player who’s been held down by this team all year and a move to the right situation could make him a godsend off the waiver wire. Some of the teams we’d like to see him on are the Bills, Lions, Buccaneers or Redskins. If he joined any of these four teams, Drake would automatically become a must-own player in all 10-team leagues. The reason for that is because this dude has some major talent. Not only is he averaging 4.4 yards per carry for his career, but Drake is also a threat catching the ball out of the backfield.

Update: Drake was traded to the Arizona Cardinals on Monday. While he likely doesn’t have a lot of long-term value with David Johnson and Chase Edmonds on the roster, he’s a brilliant one-week fill-in. Both Edmonds and Johnson will likely miss the Thursday game against the 49ers but that should force Drake into a bell-cow role. While it’s a tough matchup, it’s hard to fade anyone who could see 15 carries and five targets, particularly a talented player like Drake.

This guy was actually in our article last week and he’s a must-add with Drake out of the picture. In Week 7, Walton led the Dolphins with 14 carries for 66 yards. That gave him 133 total yards between Weeks 6 and 7 and it’s clear that he’s going to be the go-to back for the immediate future. The snap counts just continue to rise too, with Walton playing at least 43 snaps in three-straight games after the Monday Night loss to the Steelers. While he did have a poor showing in Monday Night’s game, he still got 11 carries and six targets. Anyone looking at that sort of workload is worth considering, especially with so many byes the next few weeks.

It’s rare to find viable tight ends on the waiver wire but we actually have two for you this week! Let’s begin with Smith, as he’s quietly usurped Delanie Walker as the go-to tight end in Tennessee. While Walker did sit out this week, that trend has been going on for a few weeks now. In fact, Smith is now playing 60 percent of the snaps for the year and has actually played at least 83 percent of the snaps in back-to-back weeks. That snap count is backed up by some good production, with nine receptions for 142 yards and one TD in that two-game span. Smith is a good pickup even if Walker does return from injury but I expect him to be a Top-12 tight end as long as Walker sits.

Fells is coming off the best game of his career and it’s becoming evident that Deshaun Watson really trusts this guy. Six receptions for 58 yards and two TDs in Week 8 is obviously impressive but he now has 22 catches for 235 yards and five TDs over his last six games in total. That actually makes him a Top-10 TE in that span and it’s scary to think that his snap count and targets continue to rise with the production. What adds to his intrigue is the fact that Will Fuller is expected to miss some time with a hamstring injury, opening up even more opportunities in one of the best offenses in football.

With a lack of great options on the waiver wire this week, we’ll go ahead and offer up some D/ST streamers that we like. While the Jets defense has been far from impressive, this is a great opportunity for them to post a season-best performance. The reason for that is because they face the Dolphins. This Miami club has been lacking on the offensive end, to say the least, ranking 31st in total yardage and dead-last in points scored. That looks even worse when you consider that they rank fifth in giveaways per game and while allowing the third-most sacks per game. That’s why they surrender the second-most fantasy points to opposing D/STs. The Jets defense isn’t necessarily terrible either, ranking 14th in yardage allowed this season. I’ll take a league-average defense against an offense like this anytime.

Jameis Winston is a fantasy owner’s dream. Not only does he provide solid fantasy value for himself, he always puts the opposing D/ST in play. The reason for that is because he’s a turnover and sack machine. That’s evident when you see that Tampa is tied for the most giveaways per game while allowing the fourth-most sacks in the NFL. A lot of that has to do with Winston holding the ball for too long and he’s definitely prone to make some more poor decisions in an environment like Seattle. In the Pete Carroll era, they’ve never had a D/ST finish outside the Top-12 in fantasy points scored and they currently sit 10th this season.