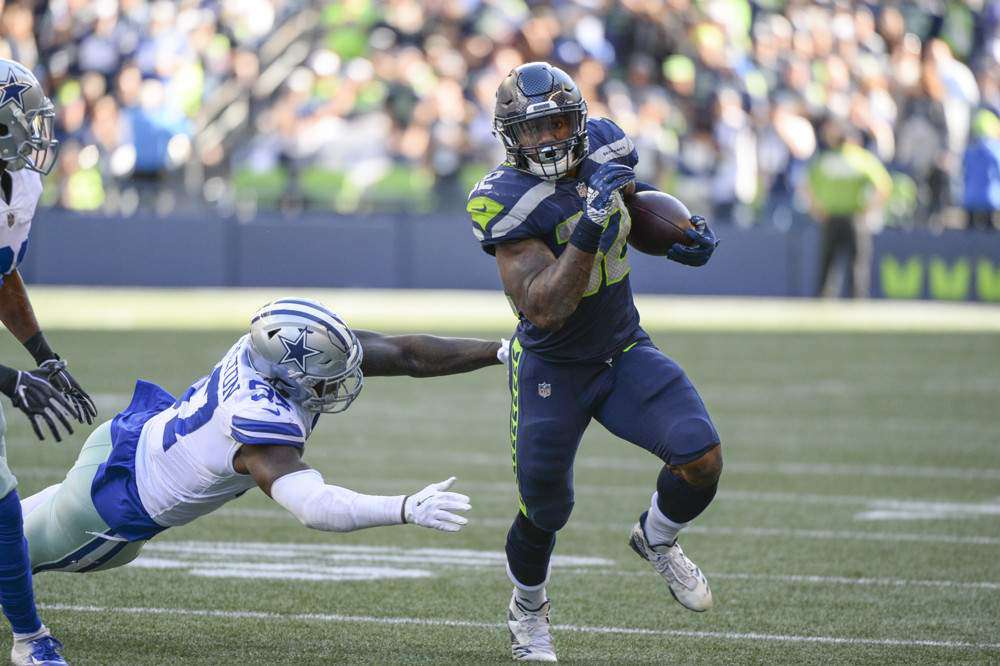 Taking a look at the week’s touches and targets leaders can go a long way in projecting where fantasy points may come from in the future. Each week I’ll break down which running backs led the way in touches, including red zone opportunities. Most of the top performers in touches and targets from a week-to-week basis are not only owned in most leagues, but started as well. This will give us a clearer view of where touchdowns may come from. A plus for the DFS players out there.

It’s hard to believe Chris Carson received only six carries in Week 2 and was reportedly gassed from special teams. I mean, I’m not NFL player, but to see him come out and lead all running backs with 32 carries and 34 touches was pretty unthinkable this time last week. He had 102 yards on the ground and also scored a rushing touchdown. Carson also caught two of his targets for 22 yards. Pete Carroll makes it hard to trust anything he says, but Carson was dropped on mass last week so if you see him on the wire, pick him up.

With only 13 carries in the first two weeks, it wouldn’t be shocking to see Carson have dud games in the future. At this poin,t it seems like Rashaad Penny is better suited for those dud showings. This week’s matchup against the Cardinals is nice as they’ve given up five touchdowns to backs already.

The Buffalo Bills shocked the world with a win in Minnesota without LeSean McCoy. Chris Ivory led the way for the Bills with 20 carries and 23 touches. It’s just a friendly reminder of what to expect if McCoy misses more time. The efficiency may not be there each time but the volume will be. I’ll make it clear; I don’t want to own him anywhere, but sometimes you don’t have a choice. He shouldn’t be on the wire.

For all the negative talk surrounding Alex Collins, he made owners smile in Week 3 with 21 total touches and a touchdown. He had 18 carries to Javorius Allen’s six and both caught three passes on four targets. Allen will always be involved, especially in the red zone and when the Ravens are trailing. Collins was leaned on during a lead last week and it’s something we should be used to seeing. Allen is worthy of a flex start in PPR formats and Collins should always get the start. He’s has the higher ceiling. It was nice to see Collins get some love in the red zone last week.

James Conner is here to stay. This will be the last week I’ll even feature Conner unless he somehow disappears. It’s very clear that Conner is going to get the same type of usage as Le’Veon Bell. It’s looking more and more clear that Bell will not play another game in a Steelers uniform. There’s no reason to sell high on Conner, and if you’re a Bell owner you can’t afford to hang on too much longer. Especially if you’re 0-3.

Carlos Hyde is in the Top-10 in rushing attempts each week, so it’s no surprise to see him so close to the top in overall touches. Hyde has looked amazing in his first three games with the Browns, and looked even better when Baker Mayfield entered the game last week. Hyde has 203 yards on 61 carries with four touchdowns for the season. He only has six targets and four catches, so he won’t come close to his 88 targets and 59 catches from last season. It doesn’t matter. Hyde was a draft day steal and health is the only way he’ll lose this job. Nick Chubb hardly touches the field and Duke Johnson Jr. is locked into a third down role. If you own Hyde, be excited.

Adrian Peterson’s 56 rushing attempts are the third most in the league and he has three rushing touchdowns. He also has five grabs for 100 yards, which is an added bonus. He’s locked into 10-20 carries a week with all the goal line attempts. There’s value in that even if the efficiency isn’t there regularly. AP is once again proving the doubters wrong. With an early bye this week let’s see if he can hold up for 16 games. He’s an RB2 in standard leagues if there was any doubt.

Jarvis Landry will always be the number one target in Cleveland and after that, it’s wide open for Antonio Callaway to be number two. Callaway’s speed as been on full display this season, but struggled with drops last week. He’s been featured in the waiver wire column since the Josh Gordon trade, and his outlook looks even better now with Baker Mayfield in the starting lineup.

Adam Thielen had an impressive 19 targets and 14 catches last week. All of that was pretty much the Vikings trying to play catch up, but it’s still clear Thielen is Kirk Cousin’s favorite target. Thielen racked up 105 yards against Buffalo and has hit the century mark in each of his three games. Thielen has also reached double-digit targets in all three games to give him a league-high 44 on the season. He’s caught 32 of those balls and has 26 catches in the last two weeks. He’s fourth overall in receiving yards and will always be ahead of Stefon Diggs in my weekly rankings.

Yes, that’s right. Josh Allen is sixth in red zone rushing attempts and he’s started two games. Allen looked pretty impressive last week in his second start, which just so happened to come in Minnesota. The Bills were 17 point underdogs and smashed the Super Bowl contending Vikings. Without LeSean McCoy. Allen’s 22 rushing attempts are six behind Cam Newton for the league lead by a Quarterback. His 97 rushing yards are the fifth most, which is basically like starting with a touchdown each week (in standard formats).

He may not have much to work with and a lot of sub 200 yard passing games are in his future, but he’s worthy of an add in Superflex leagues. Just on his legs alone. Another game like the last, and we’re talking about him in the same way we talk about Dak Prescott in fantasy. Allen may have to run for his life all season long with the Bills’ O-line being what it is. Or isn’t.

What is there to say about Alvin Kamara? Dude is an absolute beast. So fun to watch and just produces every single time out. He has a ridiculous 27 red zone opportunities. It’s really too bad Mark Ingram is expected back soon. Does it even matter? It’s hard to imagine Kamara getting 20 targets in a game where Ingram is active.

Cooper Kupp’s touchdown last week was his seventh of his career and his first which didn’t come inside the red zone. Kupp broke a tackle and took it to the house. It’s clear Jared Goff is going to use all of his weapons in this offense, so Kupp may have some quiet weeks. By the way, it’s also clear Goff is going to have a monster season as the Rams look as good as advertised. Kupp is third on his team in targets (21) and yards (186), but he has two touchdowns. One thing remains the same from last season and that’s his usage in the red zone. Kupp’s 26 red zone targets last year were tied for the second most at WR. His seven this season are tied for the third most at WR. Ironically enough, tied with Devante Adams in both seasons.

Chris Godwin’s breakout was well advertised here at Fantrax, and I’ll admit…he’s racked up points on my bench in a couple spots this season. He’s getting into that WR3 territory now, especially with bye weeks here. He’s not only become a big time player in the red zone this season, he has 20 overall targets, 13 catches, 171 yards and a touchdown in each game. The big question now is what will the return of Jameis Winston do to Godwin? It shouldn’t hurt him all that much as Godwin had two productive games with Winston last season. It was the beginning of this breakout we are seeing from him now. All three of Godwin’s catches in the red zone have been catches and he’s getting the work Cameron Brate used to get.