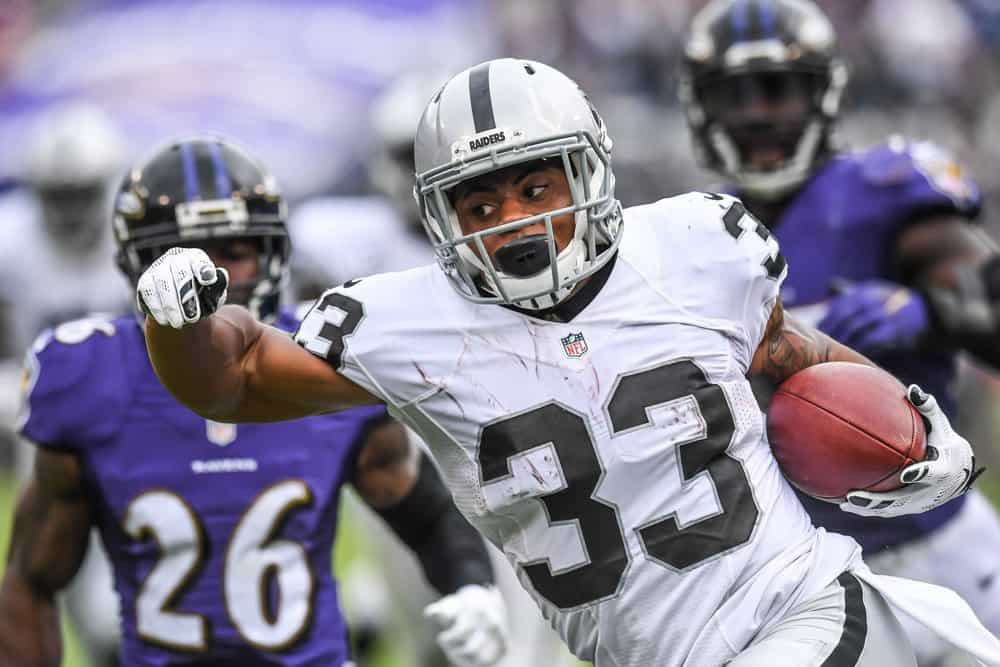 It’s playoff time ladies and gentlemen! That’s what it’s all about and it’s exciting that we’re getting down to the nitty-gritty. I actually advanced into the semi-finals of the Scott Fish Bowl League with a first-place finish in my quarter-finals and I’m ecstatic to represent Fantrax there. That means I’ll be keeping my eye on the waiver wire very closely this week, so many of these picks will be focused on the final two weeks. With that in mind, let’s get into the Week 15 Waiver Wire!

This play is dependent on the status of Josh Jacobs, as Washington would be one of the pickups of the week if Jacobs sits again. One would have to believe that’s the case, with Jacobs dealing with a fracture in his shoulder. An injury like that would make me think that he won’t suit up anytime soon, especially with the Raiders steadily falling out of the playoff race.

Oakland showed that they want to lean on Washington in his Jacob’s absence, giving him 14 carries and seven targets in Week 13. That led to 53 rushing yards, 43 receiving yards and a TD in the best game of his career. It’s hard to overlook a workload like that and it’s becoming obvious that he’s their go-to guy if Jacobs is out. We absolutely love that against a Jaguars defense who’s been surrendering the most fantasy points in the league to opposing RBs since Week 9. In fact, those five opponents are averaging nearly 200 rushing yards per game against them.

Laird is not the sort of guy that you’re going to be excited to start but his floor is hard to overlook. Over his last two games, Laird has 25 carries and eight receptions on 10 targets. Getting 33 touches in a two-game span is the equivalent of many workhorse backs and it’s clear that Laird is the go-to guy with Kenyan Drake in Arizona, Mark Walton suspended and Kalen Ballage injured. He’s been somewhat productive with that usage, collecting 134 total yards in that span while scoring a TD. The matchups in the fantasy playoffs are absolutely brilliant too, facing the Bengals and Giants the next two weeks, two of the worst defenses in the NFL.

Perriman has found himself as the number three receiver for the Buccaneers and he could be the number-two guy if Mike Evans hammy issue is anything serious. Getting to play 51 snaps in Week 13 was an indicator of that, finishing with three catches for 70 yards and a TD. That gives him a snap share above 60 percent since Week 8 and it’s very possible that he’ll play close to 90 percent if Evans sits. We love that for a guy like Jameis Winston, who ranks Top-3 in passing yards and attempts per game. Getting to face the Lions and Texans the next two weeks is simply a bonus, as they should continue to throw a ton in those sorts of games.

Higbee has been one of the best tight ends in the league for the last three weeks and it’s easy to understand why when looking at his usage. Not only has he played at least 76 percent of the team’s snaps in that span, Higbee also has 19 catches on 25 targets in those fixtures. That’s led to back-to-back 100-yard games, making him one of the focal points of this offense. The only concern here is the return of Gerald Everett but if he remains out, Higbee is a Top-10 tight end for the final three weeks. Leaning on a guy at this time of the year indicates that the Rams are full boar on this guy and it would be hard to imagine them going away from him with Los Angeles winning those last two games.

We’ve been killing our D/STs picks all season long and this is the week we need to get it right. That’s why we’re going to go right back to the Redskins well, as that dumpster fire of an offense has been good to us all season long. The reason for that is because they rank dead-last in points scored and yardage since Week 3. In fact, they’re averaging fewer than 13 points per game in that span. That’s truly horrific and it makes any defense n play against them.

We really like the Eagles because they’re playing for their playoff lives here and that should make them play with some extra fire. Recent results are somewhat promising too, with Philly allowing 17 points or fewer in four of their last five games going into Monday Night. They’ve also collected 28 sacks over their last eight games while picking up 11 turnovers and two TDs in that span, making them one of the hottest DSTs in the league.

Adrian Peterson (WSH): With Derrius Guice getting injured again, Peterson may be back to workhorse duties. We can’t hate that, facing the Giants, Cowboys, and Eagles over the final three weeks.

Noah Fant (DEN): Fant has been Drew Lock’s top target recently, collecting four catches for 113 receiving yards and a TD in Week 13. That’s his second 100-yard game over his last five games and there are simply not many tight ends who can say that.

Dede Westbrook (JAX): With D.J. Chark dealing with an injury, Westbrook should get the lion’s share of the targets in Jacksonville.

Zach Pascal (IND): Pascal has been a Top-30 wide receiver in games T.Y. Hilton has missed and remains one of the best players in this passing attack.