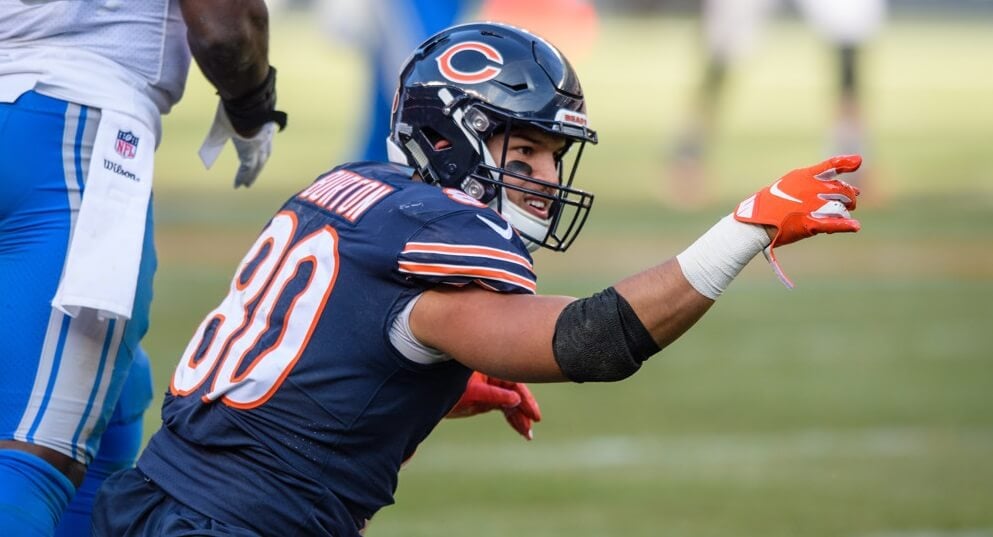 Over the years, the tight end position has become the butt of the joke (thank you). In all seriousness, tight ends are laughed at from a fantasy football perspective once you get outside the top 3 or 4 names. It’s acceptable to spend high draft capital on guys like Travis Kelce, Zach Ertz, and George Kittle. Anyone beyond that is considered a risk. That is why it may be best for you to “punt” the position if you pass on the elite options. I’m going to give you my favorite TE sleepers who are currently being drafted in the double-digit rounds in fantasy drafts that have TE1 upside.

Feel free to reach out to me on Twitter: @DomiNateFF to discuss the TE sleepers in this article or provide me with who you think is worth a late-round stab in 2019!

I’ll start by saying that I have Trey Burton ranked as my #5 TE for 2019. Obviously, I would like to see him back to 100% health before the start of the 2019 season, but I truly feel he has top 5 upside. Burton was pegged to play the “Travis Kelce” role in Matt Nagy’s 2018 offense which prompted a lot of hype in the fantasy world. Although he didn’t live up to the expectations, he still finished as the TE7 in .5 PPR formats.

There is room for him to grow. 2019 will mark Burton’s second year under Head Coach Matt Nagy and QB Mitchell Trubisky. Trey Burton finished outside the top 10 TEs from a target perspective. With the acquisition of some rookie offensive pieces, Trubisky will find himself leaning on the veteran TE, especially in the red zone as he did in 2018. This Bears offensive is making all of the right moves to progress, and as they do, we all will be raising the roof on Burton’s ceiling.

He’s back and hopefully, he’ll be healthy. I fought hard for Greg Olsen before last season in my argument against Christian McCaffrey. Although I was wrong about McCaffrey, I stand behind my assessment of Olsen. In 2017, he suffered a foot fracture in Week 2 and missed the next 8 games. He continued to deal with his injury after returning and was clearly not the same player for the rest of the year. 2018 presented another season of injury. Yes, I am concerned for his health but with a 12th round draft price, there is very little risk involved. Olsen’s injury history is contained to the 2017 and 2018 seasons. Prior to 2017, Greg Olsen had only missed 2 games in his entire career.

Cam Newton’s shoulder hindered his performance in 2018 which resulted in an abnormal amount of dump-offs to Christian McCaffrey. Newton had his shoulder repaired this offseason. If he can return to form, he will utilize his favorite target for the majority of his career, Mr. Greg Olsen. From 2011 through 2016, Olsen averaged 113 targets per season. He had 100+ targets in 5 of those 6 seasons. I wouldn’t be surprised to see Olsen have 80+ targets in 2019.

I truly do not understand the drop for Austin Hooper in fantasy drafts for 2019. He finished as the TE6 last year and is now being drafted as the TE16. Matt Ryan was the second best QB in fantasy in 2018 and there isn’t another TE on the roster to threaten Hooper’s workload. Last year, Austin Hooper led all TEs (with 33 or more targets) in catch rate. He hauled in 80.7% of his 88 targets. A target count that was eighth best among TEs. He had the fourth most receptions at the position and the seventh most yards. Hooper did only catch 4 TDs, which is why I like him a lot this year.

There is no reason his volume should decrease from last season which should result in a higher TD count for 2019. The TE6 from 2018 is free for you at the end of the 13th round.

Jimmy Graham didn’t have a great season in 2018. To be fair, it was his first year with Aaron Rodgers and the Green Bay offense. He finished with the 9th most receiving yards, 6th most targets, and 9th most receptions among tight ends. Volume was not his issue. He wasn’t very effective around the end zone catching just 2 TDs.

Aaron Rodgers only threw for 25 TDs last year. The only other times he’s thrown 25 or fewer TDs as a full-time starter were in 2017 (16 TDs in 7 games played) and 2013 (17 TDs in 9 games played). Positive regression in TDs is coming for Rodgers and this should increase the TD total for the former #1 tight end in fantasy. Graham has 9 or more TDs in 5 of his 9 years in the NFL. Although I don’t anticipate his TDs to increase that much, it’s not out of this world to think he can get around 6 in 2019. Jimmy Graham is currently being drafted as the 19th TE. Graham joins Olsen as the second potential Hall of Famer among my TE sleepers.

I wrote about Jack Doyle in the Fantasy Football Black Book 2019. He is one of my favorite undervalued players for the 2019 season so it makes sense that he’s among my TE sleepers. How quickly everyone forgets this man was a top option at the position before his injury-plagued 2018 season. Yes, the new shiny toy (Eric Ebron) came into this offense and caught a boatload of TDs from Andrew Luck. To be fair, Luck throwing a bunch of TDs is kinda his thing and Jack Doyle wasn’t on the field which allowed Ebron to overachieve. For those of you Ebron truthers, Jack Doyle domiNated the snap percentage when they both were playing in 5 games last season. Andrew Luck favors Doyle.

Jack Doyle had the 2nd-most receptions and 5th-most targets from the TE position in 2017. He finished as the TE8 that season. That production came from the arm of quarterback, Jacoby Brissett. If Doyle can produce TE8 numbers with an awful QB, imagine his upside with TD machine, Andrew Luck.

Are you down with Nate’s 2019 TE sleepers? If so you need to head on over to the 2019 Fantrax Fantasy Football Draft Kit for more great strategy, analysis, and rankings.