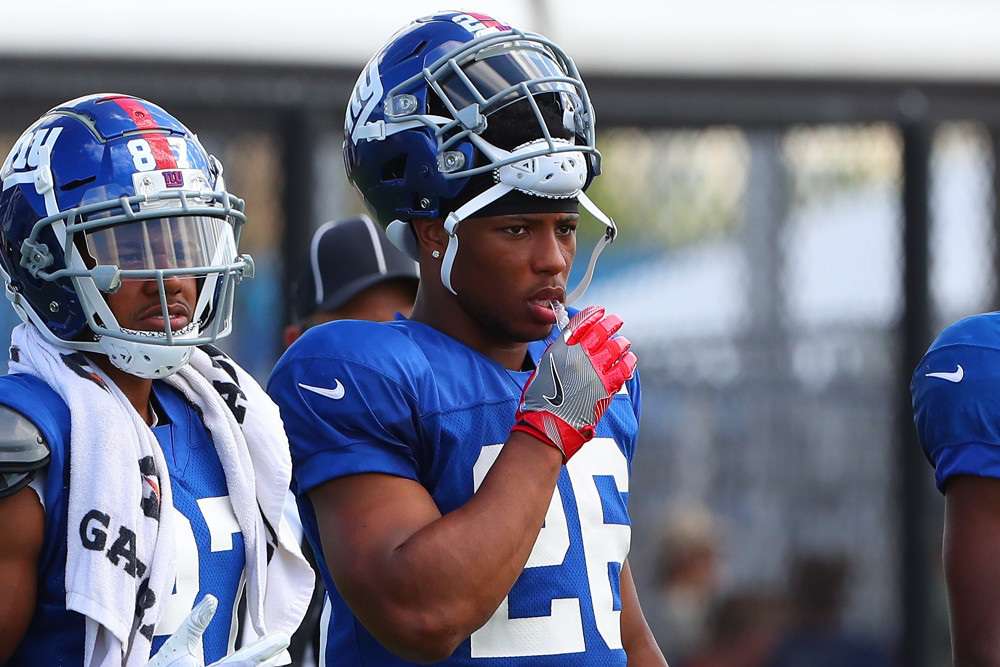 In 2017 the rookie class was exceptional. Kareem Hunt led the league in rushing and Alvin Kamara could be a revolutionary player in Fantasy Football. Leonard Fournette is going to be a workhorse for years. Can 2018’s draft class produce just like last season’s? Why, yes. Yes, they can. You’ve seen my Top 200-plus Rankings for Standard and PPR and can hear me talk about them on The Hot Take Podcast on Blog Talk Radio. Today, we are covering Fantasy Football rookie rankings for 2018.

You will notice that Calvin Ridley and Michael Gallup are not in my Top 10. In my opinion, there are players that are just as talented – if not straight up better players- in better offenses. Ridley will make some splash plays and be a reliable target on the Falcons, but will not have the volume or the touchdowns in their offense. The Cowboys will not be a high-scoring team this season and it will be too unpredictable week to week which receiver will be playable in Fantasy.

Without further ado, let’s get into the 2018 Fantasy Football Rookie Rankings. Here are my Top 10 explained with my Top listed below.

Barkley is not going to bust. I can not remember a guy that has been so pro-ready in a sport since Lebron James came out of high school in 2003. His draft cost should not scare you. In fact, the only reason he is being taken at the end of the first round is because of how stacked this first round is in 2018.

A rookie running back finishing in the Top 10 should not surprise you either. Todd Gurley was the RB5 in 2015, Ezekiel Elliott was the RB2 the following year. Last season Kamara, Fournette, and Hunt all finished in the Top 10.

Barkley will see a lot of volume as a Giant. Jonathan Stewart volturing touchdowns will be a thing, but the No. 2 overall NFL Draft pick will have 250-plus carries with 60-reception upside. I do not see Wayne Gallman taking a substantial workload away from Barkley although the former Clemson Tiger will be used sparingly. Barkley’s talent in all facets of the game will keep him on the field for the majority of snaps on his way to an RB1 season.

Last year was the year of the RB1’s in terms of rookie running backs. I believe this year will produce three RB2’s. Royce Freeman is at the top of that list in this rookie rankings piece for good reason. I feel he will be the starter on the Denver Broncos for at least 12 games. If he is not labeled the starter, he will out-touch Devontae Booker.

The Broncos ran the ball out of the shotgun 24 percent of the time in 2017 which was tied for seventh in the NFL. Freeman played four years at Oregon where they ran an offense predominately out of the shotgun. There is a reason John Elway drafted him. Freeman is a big back at 225-plus pounds but has quick burst and is one of the most elusive backs in this draft class.

The Broncos want to run the football. Freeman will be a big part of Denver’s offense in 2018.

Guice was projected to be the second running back taken in the 2018 NFL Draft. Instead, he dropped to the second round and the Redskins got a steal on Draft Day. Guice is a beast and is a great straight-ahead runner with speed and power. His knock is that he does not catch the football when in actuality he just didn’t catch the ball much at LSU. This was simply based on the system.

Guice’s upside in targets is capped around 45-50 if Chris Thompson is healthy. Although the pass-catching specialist did claim that he will not be 100 percent until November, he has not been ruled out of any games. Guice’s potential to be a three-down back if Thompson did miss time is enticing.

Guice will be the first and second down running back for the Redskins and could be the most talented back the team has had since Clinton Portis. He is an RB2 in Fantasy Football in his rookie season.

Penny can do it all which is rare. He also has an opportunity to lead his team in touches. Chris Carson looked good for a couple of games last season. The former seventh-round pick impressed until he was injured for the season in Week 4. He will be factored into the offense in 2018.

Penny will earn himself playing time and I believe that he can be a guy who has substantial value for a stretch in 2018. However, there will be games where The Seahawks are passing the whole game and players like C.J. Prosise and J.D. McKissic are being used.

Penny will earn the majority of the workload by season’s end. The fact that he is slipping right now in Fantasy drafts makes him a value pick.

Miller will be the No. 2 wide receiver on the Bears this season. Allen Robinson will be the featured guy in the passing game and Trey Burton will receive a lot of targets from Mitch Trubisky. But, Miller is the most talented wide receiver in this year’s draft class in my opinion.

In his Junior and Senior years at Memphis, Miller put up 95-plus catches and 1,400-plus yard seasons. He scored 14 and 18 touchdowns in those seasons. The former All-American is my Top wide receiver on my rookie rankings because of situation and talent.

Miller will be able to stretch the field for the Bears and will provide reliable route-running underneath for his second-year quarterback. 50-60 catches with 800-900 yards and five-six touchdowns is how I see Miller finishing in 2018.

Johnson landed on a team where he will be utilized, but in a limited fashion. LeGarrette Blount will still get goal-line work and Theo Riddick will be the Lions’ primary pass-catching back. Johnson will have the opportunity to earn the majority of the workload by season’s end, however, that number does not have a high ceiling.

Johnson will eventually be a three-down back in the NFL but he will have to rely on injury to garner a substantial timeshare this season. If Blount is ineffective or becomes unhealthy (he is 31) Johnson will be a playable RB2/Flex option. I still believe that Blount has enough left in the tank to play well for Matt Patricia in Detroit to limited Johnson’s upside.

Michel is going to be taken too high in Fantasy drafts. That does not mean he will not have a good rookie season. With the Patriots, he has the opportunity to lead a potent offense in touches – and those touches will be meaningful.

However, Michel has ball security issues that are troubling. He fumbled once every 54.6 attempts at the University of Georgia. The average draft prospect fumbles every 124.6 times. If anyone can fix this, it is Bill Belichick and his staff who elected to take Michel in the first round.

Michel averaged 7.9 yards per carry in his Senior year and that is not a typo. He is explosive up the middle and will provide Fantasy owners with RB2/Flex appeal during the season. The problem I foresee with Michel is that he will lose goal-line work to Rex Burkhead (who the Patriots just extended in the offseason) and pass-catching duties to James White and Burkhead.

Moore is going to have some big plays in 2018. However, the targets that Christian McCaffrey, Greg Olsen, and Devin Funchess will demand limit Moore’s upside. Like Ridley and Gallup, I see Moore as being a better fit for his team rather than a Top Fantasy option. But, Moore’s all-around receiver skills and his ability to run after the catch will make him playable.

I have Moore ranked as a WR4/5 in Fantasy in 2018 which will make him a Flex-play. He will be able to win weeks for Fantasy teams with his “boom” potential. While he is polished as a wide receiver, the targets will be limited in the Panther’s offense.

Whether you’re a fantasy rookie or a seasoned veteran, head on over to Fantrax to start or join a league today! Fantrax can work with virtually any league setup you can dream up.