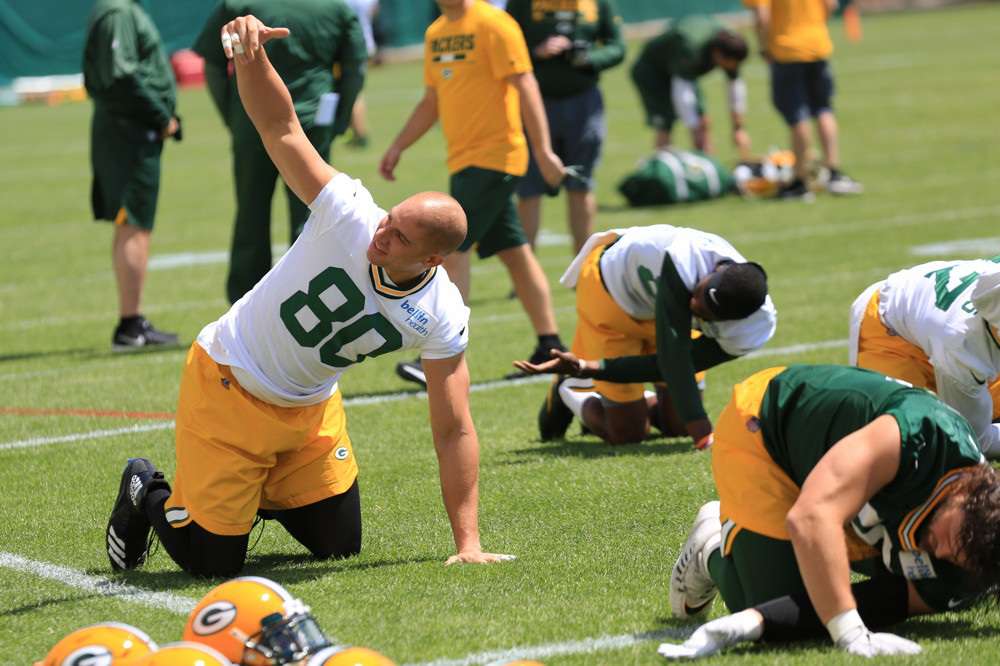 Continuing with part three of this four-part series highlighting the top red zone targets of 2017, we shift our focus to everybody’s favorite position: Tight end. The tight end position won’t play a big part on your fantasy football squad. In fact, more and more leagues are eliminating the position altogether, or simply adding a flex spot that allows you to play a tight end or a wide receiver. With that said, three of the top 10 NFL leaders in red zone targets last season were tight ends.

You should never reach on a tight end as most (after the top few) will provide roughly the same production. Many tight ends are touchdown dependent and typically don’t rack up a lot of yards or catches as most of their targets come through the middle of the field on short yardage throws. Tight ends do most of their damage in the red zone and it’s important to look for one who will be involved in the offense when their respective teams get in the red zone.

There are three elite tight ends in my opinion (Rob Gronkowski, Travis Kelce and Zach Ertz), and none are worthy of early draft picks. You are better off waiting until the middle rounds (where you took Ertz last season), or toward the end of your draft when selecting one.

Gronk, Kelce and Ertz were the only tight ends to surpass the 145 point total in PPR leagues. Those three, along with Jimmy Graham, Evan Engram and Delanie Walker, were the only tight ends to hit the 130 point mark in the same format. Cameron Brate, Jason Witten, Jared Cook and Ben Watson all finished with over 100 points but likely went undrafted in your leagues in 2017. Watson was ranked as the TE13 in PPR formats last season.

Some will argue getting a Gronk or Kelce will set you apart from the rest of your league mates, but I’ll argue that spending a top pick on a tight end will set you back in terms of roster depth. You are much better off selecting a second or third running back than a tight end in the first three or four rounds of your draft.

The highlighted players below are the ones we’ll focus on. The numbers are from Pro Football Reference. The red zone targets and catches differ slightly depending on what site you look at.

Inside the 20-yard line:

*Not included in this top 10 list is Jason Witten who retired during the offseason. Hunter Henry is also missing from both lists as he’ll miss all of 2018 due to a knee injury.

Inside the 10-yard line:

Graham’s 57 catches last season were the third-fewest of his career, his 520 yards the second-fewest behind his rookie season, and he had a career-low 9.1 yards-per-catch average. All 10 of his touchdowns came inside the red zone and you can expect Jimmy to be productive inside the red zone again with Aaron Rodgers as his new quarterback.

Rodgers finished first in red zone passing attempts in 2016, and he finished second in 2015 and 2014. Keep in mind Jordy Nelson and his league-leading red zone targets, catches, and touchdowns are gone to Oakland. Expect similar production from Graham in GB as he provided owners last season. He has the upside to finish as a Top 5 tight end yet again in 2018.

Zach Ertz had a career-high eight touchdowns in 2017 and he finished with 100-plus targets, 70-plus catches and 800-plus yards for the third straight season.

Ertz is not a lock to get the ball when Philly gets inside the 20-yard line as his 18 red zone targets last season were tied with Nelson Agholor and one more than Alshon Jeffery. Even still, Ertz continues to improve each season and Philly finished top five in red zone opportunities and production in the red zone last season.

Ertz finished with 17 red zone targets in 2016, but he only caught eight balls for four touchdowns. He caught 12 of his 18 targets for eight touchdowns last season and may get more play inside the 10-yard line with LeGarrette Blount’s departure.

I wouldn’t spend a fourth-round pick on Ertz, but if he somehow fell to the late fifth or into the sixth, he’d make for a solid selection with the potential to improve on his breakout season.

George Kittle had 40 plus yards in only two of his first 10 games in his rookie season and then came Jimmy Garropollo. Kittle hit the 40-yard mark in his final three games of the season and had three-plus grabs in three of his five games with Jimmy compared to only twice without him.

Kittle found the end zone in his second to last game of the season and finished with 100 yards in his final game of 2017.

Kittle is a prime breakout candidate in his second year in the NFL with Garropollo as his full-time quarterback. At 6’4″, Kittle will likely be Garrapollo’s number one target in the red zone in what should be a much-improved offense. He’s already been drafted on three of my teams and is the perfect example of waiting it out at the position. Start thinking about him with your last couple picks.

Ben Watson will go undrafted in just about every 10- and 12-team league, but some will spend a last pick on him as many are starting to take the ‘wait as long as possible approach’ when drafting a tight end. Watson will pop up throughout the season and is worth a pick in deeper formats.

Watson’s best season came in 2015 when he caught 74 of his 109 targets for 825 yards and finished with six touchdowns. All marks were career-highs for the 13-year vet. All six of Watson’s touchdowns in 2015 came inside the red zone, and his 12 red zone receptions were tied for the 10th most that season.

It’s hard to get too excited about Watson as Drew Brees has plenty of options in the passing game along with two capable running backs to use in the red zone. Mark Ingram and Alvin Kamara are a big reason why Drew Brees had 30 fewer red zone passing attempts in 2017 compared to 2016.

Austin Seferian-Jenkins is one of a few faces that will wear new jerseys this season. ASJ had a career-high 74 targets, 50 catches and 357 yards across 13 games last season as we finally saw his true potential. He’ll likely be Blake Bortles’ number one passing option inside the red zone, but the Jaguars will remain a run-heavy team and will lean on Leonard Fournette inside the red zone. He has very little fantasy appeal but could pop up throughout the season when injuries get the best of owners.

Which Hitters Could Thrive With Increased Playing Time?