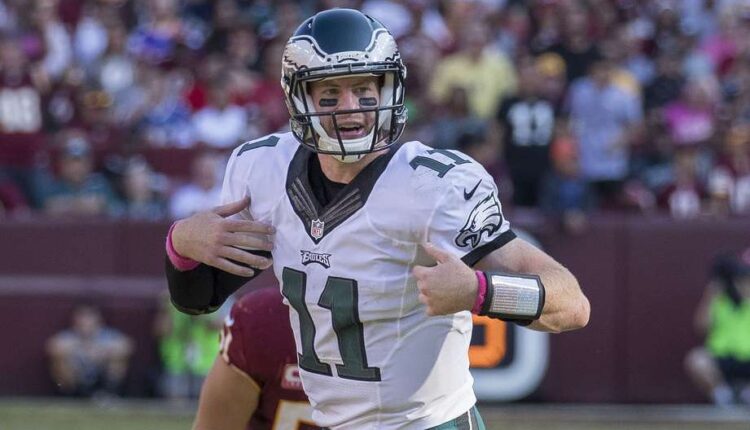 With the NFL Combine concluded, many teams now have a clearer idea of who they want to target in the upcoming NFL Draft. During the Combine period, additional rumors were generated about free agent player movement. We now issue our final installment in the series of NFC Offseason Outlooks, with more to examine and consider as we peer ahead at the NFC East.

The Giants seemingly have everything in place offensively to surround their future franchise QB with. They have a superstar RB, and a superstar WR and a quality WR2 and TE. They even have a proven champion QB on the roster who can mentor their new passer.

Now it becomes a question of which incoming rookie will the Giants likely select at No. 6 overall? Many mock drafts have Dwayne Haskins being taken by New York, but there is a very strong chance that at least one team could trade up ahead of the Giants to land Haskins or another one of the top QBs outside of Kyler Murray.

There is also a rumor that the Giants could possibly deal for Josh Rosen, but he has already looked like a project. The Cardinals are now widely expected to take Kyler Murray first, and it appears Rosen may be traded. But if the Giants are to make any sort of deal, could it be them actually moving up a few spots to fully ensure they land Haskins? It’s going to be an interesting first five picks. If the Giants miss on Haskins, they could be very happy with Drew Lock as a consolation prize. Both QBs are sizable with big arms and throw a fine deep ball. That’s more in the mold of what the New York front office wants, as opposed to a dynamic “shortie” like Murray.

Either QB could take over pretty quickly from Eli Manning, who would be relegated to a player/coach type in a seemingly shorter time window. He’s going to stick around as a veteran mentor and insurance in case the rookie has trouble adjusting to the NFL right away. Either passer could boost the outlook od Odell Beckham Jr. with their deep-throwing talents, and with a cast including Sterling Shepard, Saquon Barkley, and Evan Engram, it will be hard not to succeed. Engram just needs to stay healthy to regain firm TE1 status and Shephard could move back into the fantasy WR3 conversation.

But there have been rumors that the Giants are willing to trade Beckham. Such a move would certainly dampen the outlook of any potential new starting QB.

The Cowboys won a playoff game this past season and the offense seems to be heading in the right direction. It’s not just all about Ezekiel Elliott anymore. Having Amari Cooper in the mix for a full season in 2019 will only help the unit continue to rise.

Elliott will be an easy Top 3 selection in many drafts, especially after coming off his best year ever as a pass receiver. Cooper was only too glad to get out of Oakland, where he was the main target of defensive attention, and he’ll push for fantasy WR1 status in 2019. But the Cowboys need one more steady piece in the passing game to truly stabilize the unit and give Dak Prescott a better chance to regain full fantasy QB1 status.

Cole Beasley may be gone in free agency, and Allen Hurns was a bust. The return of TE Jason Witten, at 37 years old, won’t be much of a fantasy story and only may help Prescott when he needs key completions on shorter passes on some important downs. Witten’s return might also stunt the shorter-term progress of Blake Jarwin, who looked promising, especially for dynasty purposes.

Dallas has the salary cap space to compete for one of the better WRs in free agency, while Michael Gallup will continue to become a very potent third wideout. Golden Tate is the top prize on the market and would be an ideal fit with Cooper and Gallup. Jamison Crowder could also effectively replace Beasley and improve on his production. Adam Humphries is another possibility. Dallas already has big-play types, they could use a receiver who can be reliable to move the sticks and gain yards after the catch. Jerry Jones is reportedly tired of not advancing past the Divisional Round of the playoffs for over 20 years and is not going to let a significant need go unaddressed.

The Eagles have apparent needs on offense, but as the offseason opens, no NFC team has less cap room. There are already rumors that they are trying to deal Michael Bennett, and there has also been talk of getting rid of Nelson Agholor. There have also been Le’Veon Bell mentions, but he just does not seem to be affordable and is more of a longshot right now.

By the time the playoffs rolled around, it was clear Philly was very weak at RB, and will need much better support for a returning Carson Wentz in 2019. They also lacked enough deep speed at wide receiver. If Wentz is to return to being a fantasy QB1 the Philadelphia offense must establish better balance with a dependable running game and must solidify the pass-catching crew for him. Otherwise, defenses will continue to tee off on the young QB and he will remain an injury risk without run support. Big plays will not come consistently without the necessary downfield threat.

Those glaring two needs may have to be addressed early in the draft, as it would be sensible for Philadelphia to take a possible impact WR and RB in the first three rounds. Some mocks have them addressing a prime defensive area first and then shooting for a WR. One mock I perused had them taking a RB in the second and a WR in the third. Unless Philly gets creative, they might just pick off lesser targets in free agency. This draft can be a very important one for the Eagles. They have committed to Wentz as their QB of the here and now and the future, and need to improve the playmakers around him in short order.

Washington seems to be in dire need of playmakers everywhere on offense, and it will have to start at QB. Doug Williams has already indicated the team is leaning that way if the right player falls to their first-round slot. But sitting at No. 15, Murray, Haskins, Lock and Daniel Jones could all be gone. Unless Washington trades up or luck is with them, the chances of landing a Top 4 passer do not seem to be too good. So they may opt for a WR. They could hope D.K. Metcalf falls or go for Hakeem Butler.

Washington could also take a QB after the first round and possibly make a play for a veteran stopgap starter like Tyrod Taylor or Ryan Tannehill, if he becomes available. Or maybe they get in on a possible trade for Rosen? It’s hard to envision them opening 2019 with Colt McCoy as a starter.

The Redskins do not have a lot of cap room as free agency beckons, and Crowder may leave. It is uncertain if Adrian Peterson will return or of Derrius Guice can be a contributor any time soon. Other than Chris Thompson, there is not a single RB on the offensive depth chart that fantasy players want to target with any mode of enthusiasm. So whoever is acquired at the RB and WR positions is going to draw attention, as opportunity is always a key for potential production. There’s opportunity galore here for any newcomers.

Power on the Cheap: Late Round Home Runs