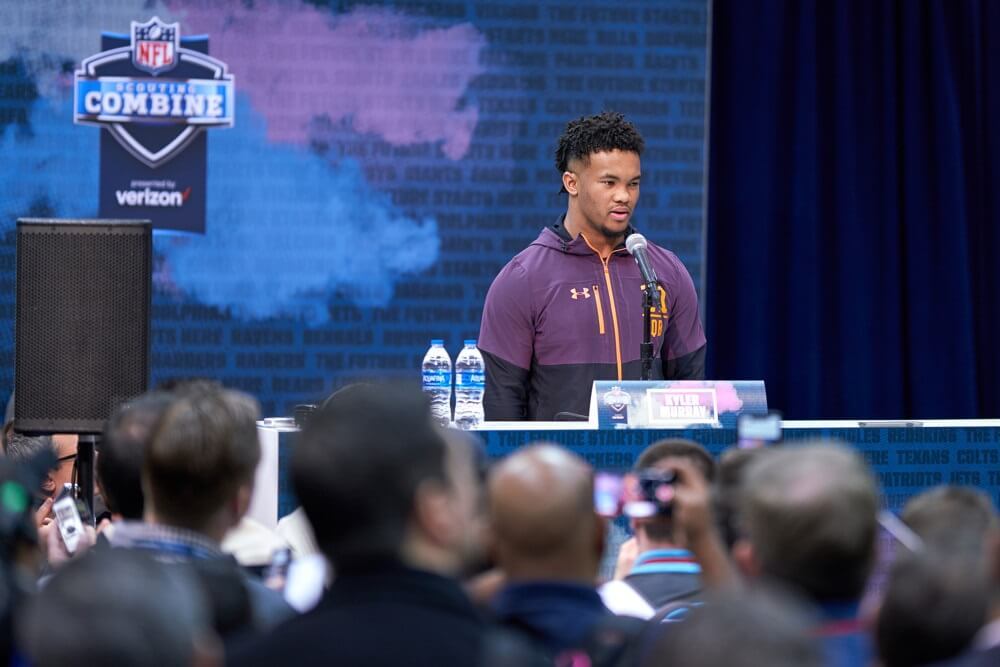 The NFL Combine has always been interesting to me. I fully understand that it is important to know how athletic a prospect is when teams are considering paying them a lot of money to, ya know, be athletic. But I also think it is interesting to see how a player’s stock can be affected. After years of college tape and watching a player develop and perform, so much can be impacted by seeing them on a field without pads on!

The NFL combine is also sort of that for fantasy football players. Look, I get it during the NFL season so much of your time is dedicated to Fantasy Football, that it could be tough to keep up with college football. But, the combine provides the first real opportunity since the fantasy season ended for you to not only familiarize yourself with the rookie class, but to learn new information. You get to see who stands out, who hurts their stock, and more importantly, you can start to see what fantasy analyst think of these players!

Here are some of my thoughts on players who are the biggest winners and losers from the combine!

Winners from the NFL Combine

Kyler Murray is a winner and he didn’t even participate at the combine. Why? Because he measured in at 5’10 ⅛ of an inch. He’s still one of the shortest QBs ever measured, but man, if he was sub 5’10, you would be hearing a lot more chatter about letting him slide. Murray is the face of the draft and it is looking more and more like he will be the No. 1 pick. In fact, a report recently stated that the Cardinals are selling Josh Rosen jerseys for 60 percent off!

The Heisman Trophy winner is explosive and honestly may be the quickest player I’ve ever seen on a football field. He put up massive numbers with both his arms and legs at Oklahoma. For fantasy purposes, he is the most vital pick in the draft. Whichever team pulls the trigger will likely turn to Murray as their starter in 2019, meaning that an entire offense may be changing! QB is plenty deep, but Murray would be a very solid QB2 due to his rushing ability and we know the upside is sky-high. He will be a popular QB2 pick in Super Flex leagues if he ends up on Arizona.

D.K. Metcalf won the combine, the internet and really anything else he could have won this weekend. Metcalf started to win the internet a couple of weeks ago, when a photo of him looking like the Hulk was posted on Twitter. So when the 6’3, 228-pound receiver put up 27 reps on the bench press no one was shocked. But, when he ran a 4.33 40? Yeah, a lot of heads were turned. He also had one of the best verticals of all wideouts at 40.5 inches.

Metcalf drew comparisons to Julio Jones after his impressive combine. The one weakness? His 3 cone drill time was worse than Tom Brady. You’ll see that on Twitter a lot this week. Agility may be the one power this superhero-like human misses. Still, he is a physical specimen who is a vertical threat and clearly possesses the ability to get up and get jump balls. He can be an instant force in the red zone. He is a lock to go in the first round, with some saying even inside the Top 10. Teams inside the Top 15 that would be a good fit for the WR: 49ers (trade down scenario), Jets (unlikely unless trade down), Jaguars, Bills, Broncos (but need QB), Packers (this would be FUN), Dolphins, Redskins.  His college teammate A.J. Brown may also go late in the first round.

N’Keal Harry was another big winner in my mind. First, he matched Metcalf’s 27 reps in the bench press, which is impressive in itself. He also ran a 4.54 40, with a 38.5 vertical leap. Some will have Harry as a combine loser because he measured in at 6’2, which is two inches smaller than he was listed at ASU, according to reports. However, to me, he is one of the best all-around athletes at the WR position.

It is not all about the combine and Harry has balled out as a Sun Devil, putting up 1,000+ yards and 8+ touchdowns in back-to-back seasons. His fantasy impact will come down to which team drafts him, but I expect to hear his name of Day 1 of the NFL Draft. Also, he has a really cool backstory that I highly recommend you read up on. It won’t affect his fantasy stock but it is very cool nonetheless.

Parris Campbell ran a 4.31 40, the fastest of all wideouts at the combine. That also tied for the fastest of all 40 times at this year’s combine. We’ve seen how a player with blazing speed can be pulled up a draft board a la John Ross. Campbell will likely get boosted, but do not think first round. I would expect a team that is looking for a speedster would select Marquise Brown, aka Hollywood, aka Antonio’s cousin, over him.

Brown is only 5’9 and 166 pounds, but he is lightning fast and projects to be one of the first three wide receivers off the board. He did not partake at the combine due to a foot injury. As for Campbell, who is 5’11 and 205 pounds, he should go in the third or fourth round. He could fit nicely with a big arm QB such as Josh Allen in Buffalo.

Noah Fant was a huge winner at the combine. The Iowa tight end posted a 4.50 40 and a 39.5 vertical jump. Those are wide receiver numbers. He led the tight end class in pretty much every competition. Fant is a first-round talent, as is his Iowa teammate T.J. Hockenson. Many have Hockenson going higher, but I prefer the high ceiling of Fant. The two basically have the same size, as they are less than an inch and two pounds apart, according to their measurements. Yet, Fant is faster and stronger (20 bench reps to 17) and clearly was the best athlete at the position. In college, Hockenson had 49 receptions for 760 yards and six TDs this season, while Fan had 39 receptions for 519 yards and seven touchdowns. However, Fant had 11 in 2017, while Hockenson has nine career touchdowns. Either way, both will likely go in the first and add some much-needed life to the tight end position. Which of the two I would prefer in fantasy all depends on their landing spot in the NFL drafts. I know rookie tight ends don’t have a long history of immediate success in the NFL, but these are two to pay attention too.

Losers from the NFL Combine

Dwayne Haskins/Stephen A. Smith – This one may confuse you a bit. But, a couple of weeks ago Stephen A. Smith said he views Dwayne Haskins as more of a running QB than a passing one. Haskins went out and ran a 5.04 40-yard dash at the combine. Yeah, that sounds like more of a running QB to me as well. Remember, this is a QB who threw for 4,831 yards and 50 touchdowns to just eight interceptions, while rushing 79 times for 108 yards and four touchdowns.

This big bodied QB can prove to be a good goal-line rusher and perhaps add some value there with his legs, but other than that his rushing ceiling seems pretty low. Because of that, I prefer Kyler Murray in fantasy. Still, Haskins will be a back-end QB2 in fantasy, who I expect to go in the Top 10, likely the Raiders or Giants. One of those is a much better situation and it is not the team whose best offensive weapon is Jared Cook.

Elijah Holyfield is the son of legendary boxer Evander Holyfield and is appropriately labeled as a bruiser. Holyfield ran a 4.78 40, which is pretty terrible. How bad is it? Well, it was the second slowest of all RBs, in a year that didn’t see any RB really blow anyone away. Coming out of RB-U (Georgia) there were high expectations for Holyfield. He just rushed for 1,018 yards and seven touchdowns there. He was expected to follow in the footsteps of Todd Gurley, Nick Chubb, Sony Michel, and the many other great RBs to come from Georgia. Some point to his college tape or numbers and think you should not worry. I am not one of them. In fact, Holyfield is off my fantasy board, unless he somehow ends up starting somewhere.

Why am I so worried? If there is one lesson we learned in 2018 it’s that teams are getting away from plodding RBs in favor of more explosive backs. Think of the Bears, who used Tarik Cohen more-and-more over Jordan Howard as the season went on. And if you want a pass-catching back? Well, you should know Holyfield has seven career catches with just five in 2018. I expect Holyfield to be a later-round pick in both the NFL and fantasy drafts. Sure, perhaps he can have a nice career as a slow back who can gain the tough yards and be used near the goal line. But those players are more valuable to NFL teams than Fantasy, as their upside and touches are likely capped. Is that the kind of back you want on your fantasy team? I don’t.