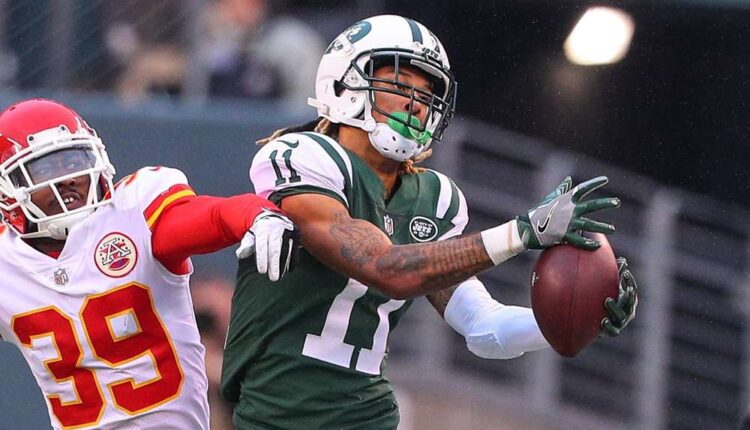 The NFL free agency market is becoming thinner as more and more splashes are made. Teams continue to shape their rosters for the 2020 NFL season and we are down to really just one big step left; the 2020 NFL Draft. But as free agents sign it is important to stay up to date on what it means both for the teams they are signing with and the teams they are leaving (I am sure you have time right now). This allows you to not have to play catchup in your fantasy football league all at once in August because then plenty will fall through the cracks! I wrote about previous free agent signings around the NFL and you can read about them here, here and here!

I cannot reiterate how much I dislike this signing. Robby Anderson may not be an elite WR, but he can stretch the field with the best of them. Over the past two seasons, Anderson has averaged 97 air yards per game, the 14th most of all wideouts. In his career, Teddy Bridgewater has averaged 7.2 air yards per target, which in that span ranks … 116th among all QBs (min. 100 attempts). He has averaged just 2.5 attempts of 20+ air yards per game in career. In all of 2019, he completed just seven passes of at least 20 air yards. Simply put, Bridgewater is not a downfield thrower and that is where Anderson is best utilized.

Additionally, he now joins DJ Moore and Curtis Samuel as the top receiver targets, along with Christian McCaffrey, who we know will see plenty of targets himself. Bridgewater struggled to get four players consistently involved in his time with the Saints. Here are the target breakdown in his five starts:

This is an offense that I think will be better for real-life purposes than for fantasy. Anderson, much like Samuel is a boom-or-bust weekly option. Both will be in the range of flex options or WR4.

Breshad Perriman to the Jets

The Jets wasted no time finding their Anderson replacement. Perriman will be the top outside WR for the Jets unless they draft one in the first round. Perriman disappointed for much of his NFL career, but he stepped up when both Mike Evans and Chris Godwin were sidelined. In Weeks 13 through 17 last year, he averaged 21.2 fantasy PPG. In those five games, he averaged 101.2 receiving yards per game and scored five touchdowns. Now, that was as the top weapon in the Bucs offense and the Adam Gase led Jets offense is certainly not the same. But, for what it is worth, Anderson has the most targets (163), receiving yards (1,341) and touchdowns (11) from Darnold in the young QBs career. There may be some inconsistencies week-to-week, but the targets and air yards will be there for Perriman. As of now, Perriman is a WR3, with upside. In fact, I would rather have him than Anderson now.

Devin Funchess to the Packers

This move may not seem big on the surface, but the Packers receiving core is so thin, that there is a chance Funchess can be fantasy relevant next season. I fully expect the Packers to draft a WR, but I expected them to try and make a splash in free agency too. As of now, the WRs behind Davante Adams are Funchess, Marquez Valdes-Scantling, Allen Lazard, Darrius Shepard, Jake Kumerow and Equanimeous St. Brown.

Funchess has been a disappointing WR thus far in his career. Last year an injury washed away his season with the Colts, but prior to that his career-high in receiving yards was 840 and eight touchdowns. He could step up as the Packers’ second-best red zone option behind Adams. Still, the ceiling is pretty low so I would stay away as of now in drafts. He is merely a deep flex or bench option with some upside.

Phillip Dorsett to the Seahawks

Dorsett took the Josh Gordon route and went to Seattle after leaving the Patriots (different circumstances though). Dorsett landed a one-year deal with the Seahawks. As of now, I expect that he will be fourth in the pecking order for targets behind Tyler Lockett, DK Metcalf, and Greg Olsen (Will Dissly if Olsen misses time). Dorsett has topped 500 yards just once in his NFL career and has never scored five touchdowns. The bigger question to me here is: does this close the door on a potential Josh Gordon reunion?

For fantasy, Dorsett is purely a late-round flier. In fact, he is likely to go undrafted in many leagues.

The Cowboys standout center retired at 29 after battling an autoimmune disease. Everyone knows Frederick and the rest of the Cowboys o-line has been a strength for years. In 2019, they were ranked the fourth-best offensive line by PFF. He played the fourth-most snaps of all centers and had just one penalty. He was rated the 11th best pass blocking center in the NFL last year, which means his absence will surely be felt by Ezekiel Elliott. The Cowboys still have Joe Looney, who started in place of Frederick in 2018. This does not change Elliott’s status as a high-end RB1, but it does add some more risk to him.

Tyler Eifert signed a two-year deal with the Jaguars. We know the talent is there with Eifert, but he can never seem to stay on the field. The Jaguars did struggle to find a red zone threat alongside DJ Chark. Eifert can certainly help fill that void, for as many games as he is healthy for. Due to the health concerns, he is a TE2, who has some touchdown upside when healthy.

Tajae Sharpe is officially the Stefon Diggs replacement in Minnesota. At least, until they draft a receiver in the draft next month. Sharpe never lived up to expectations in Tennessee and the Vikings do not throw the ball enough to make Sharpe anything more than a late-round flier. If he escapes the draft without being surpassed on the depth chart, then he can be viewed as more than a late-round flier with Minnesota.

Peyton Barber landed a 2-year/$3-million-dollar deal with the Redskins. He is purely RB depth and not even a lock to make the final roster. That is because Washington has Darrius Guice, Adrian Peterson and Bryce Love. For those who don’t remember, the Redskins used a fourth-round pick on Love despite the fact that he tore his ACL in his senior season in college. If healthy, a big if, Guice and Love provide much more upside than Barber. Peterson at his advanced age, still brings more to the table.

Blake Bell landed a deal with the Cowboys. He was primarily used as a blocking tight end with the Chiefs, which is the role I expect him to play here with the Cowboys. With Jason Witten now in Las Vegas, Blake Jarwin is a nice TE2 pick with upside.