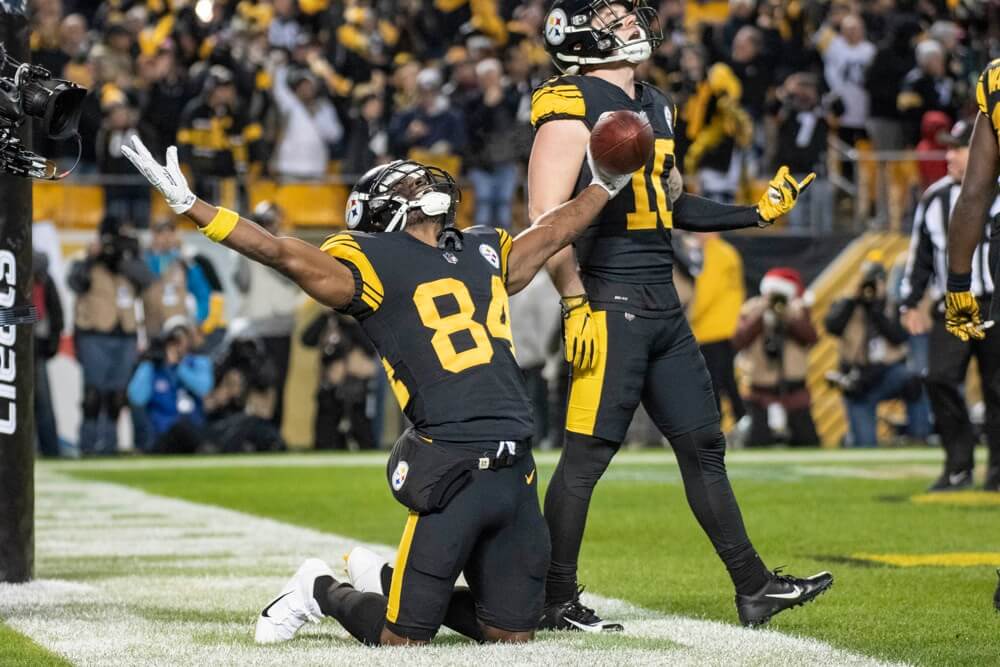 Antonio Brown’s tenure in Buffalo was over before it started! Instead he will be ditching the black and yellow for the black and silver! Unless you are a Raiders fan, all you really care about is his Fantasy value, right? I mean I am a Bills fan and the first thing I thought of was “Happy to root for him, likely not drafting him.” You may be thinking that had everything to do with Josh Allen and the Bills offense, but that is just a part of the story.

Before I even break down the opportunities he may have with the Raiders, I should tell you I was already of the mindset that AB was on the decline. I was set to rank JuJu Smith-Schuster ahead of him and now I definitely will. While Brown is still immensely talented and would have once again been a Top-10 WR if still with the Steelers, he was still sort of saved last year by his career-high 15 touchdowns. It is hard to call it a down year when he had 1,297 yards, but that is the second fewest of his historic six-year stretch. However, if you look a little deeper into those numbers, his season was also helped by two huge games. He had a game with 14 catches and 185 yards in Week 16 and one with 10 catches for 154 yards in Week 13. That equated to 26 percent of his yards and 23 percent of his catches. If you had Brown on your fantasy team last season, it was not as much fun as it has been in past years.

It is no secret that the Raiders are not going to throw the ball nearly as much either. Last year the Steelers led the NFL averaging 43.1 pass attempts per game, which was the most in the NFL. The Raiders, however, only threw the ball 34.8 times per game, which tied for the 16th most. I expect that number to climb now that the Raiders have an actual weapon and Gruden will be in his second season with this offense. However, I am not so sure we should give Gruden the benefit of the doubt. I bought in on Amari Cooper because of the numbers that WR1’s consistently put up under Gruden in his previous tenures. However, Cooper played in six games before being traded. Let’s look at the first five, since he suffered a concussion early in the sixth game. In those five games, he was targeted eight or more times twice. In the other three games he saw two targets or fewer. Still, Cooper is not Antonio Brown. If anyone is hoping Gruden reverts to his old ways it should be AB. Brown has seen 160+ targets in five of the last six seasons.The one season he did not, he had 154 targets. As he says, business has been boomin. But, in Gruden’s first season with the Raiders, Jared Cook led them with 101 targets. No one else had over 90. Does Brown get to 160 targets with the Raiders? It would take a total offensive overhaul from Gruden, but that is exactly what should be done when you add a player such as Brown. While he didn’t do so last year, Gruden has a history of not only peppering his top wideout with targets, but having them put up monster numbers. This is from my Amari Cooper piece last August, breaking down all the WR1’s season under Gruden:

While Brown may be declining, he is still a premier receiver. But there are a number of factors that will affect his fantasy value with the Raiders.

As for fantasy, AB will no longer be a first-round pick. I would expect to see him go around the two-three swing. The first round will be loaded with running backs with perhaps as many as 10 going. The second will be the top-flight receivers, a group which Brown will no longer be included for fantasy purposes, and more running backs. I think Brown will be targeted as a borderline WR1 or high end WR2 in Oakland. While I expect 2019 to be his worst season in seven years, I still think his name alone will keep him in the discussion to be a late-second or third round pick. But if I am being honest, as of now, I do not expect him to be on a lot of my teams. I will target another receiver there instead of trusting an aging WR on a new team. And I would be lying if I didn’t say I am hesitant to invest such a high draft pick once again trusting Jon Gruden to do the right thing. But, that can change!

We still have to see what other pieces the Raiders bring in. As of now Brown would draw all of the attention from opposing defenses. But, there are rumors that the Raiders are heavily interested in adding Le’Veon Bell, which would obviously change how teams can attack the Raiders. Also, who will be throwing Brown the ball is not fully determined. Derek Carr did not look great last year and only threw for 4,049 yards, which isn’t bad, but is nothing compared to Big Ben’s league-leading 5,129 passing yards. But once again, there are rumors surrounding the Raiders. One includes that Gruden wants to draft Kyler Murray and build an incredibly athletic and talented offense with him and the two former Steelers. Brown’s upside becomes significantly higher if those two are on board.

One point for those of you who may be panicking in a keeper or dynasty league, I think that may be overreacting. While I think AB is declining I still think he is worthy of holding onto in those formats. Especially if he makes the Larry Fitzgerald type jump and moves into the slot in a year or two. As long as Gruden is smart enough to think of that, as well.

We also have to see how the Steeler replace AB before we can judge what this fully means for their pieces. But I still expect JuJu to be a Top-10 WR this year and would draft him over AB, easily.