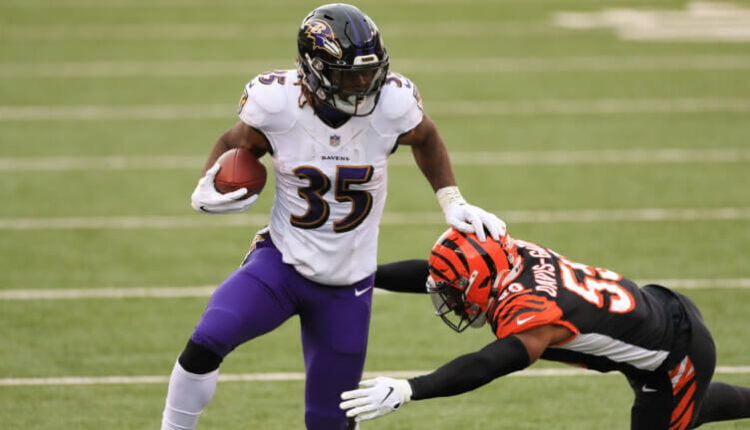 One of the most talked-about names in recent days has been Gus Edwards of the Baltimore Ravens. The reason for this is that J.K. Dobbins, the second-year back and would-be breakout candidate at the running back position for the Ravens, is out for the year after suffering a torn ACL in Baltimore’s final preseason game. The injury is unfortunate because Dobbins was poised to have a big year as Baltimore’s featured back. That distinction will now fall upon Edwards. Even though Edwards figures to see a substantial projected increase in workload, it seems many fantasy managers are avoiding drafting Edwards too early in recent drafts, particularly in PPR formats. Here is why I believe that is a mistake.

Gus Edwards was a member of the Miami Hurricanes for four years beginning in 2013. In his first two collegiate seasons, he played behind Duke Johnson. Edwards split second-team reps with Dallas Crawford as a freshman and Joseph Yearby as a sophomore. Not exactly household names. Edwards was primed for a larger role in 2015 but missed his entire junior season with a foot injury. The Miami coaching staff relegated Edwards to the team’s third option in the rushing game during his redshirt junior season. Edwards decided to transfer to Rutgers for his senior season. He was the leading rusher for the Scarlet Knights, but his 713 yards and 4.3 yards per carry hardly moved the needle. Edwards entered the NFL as an undrafted free agent in 2018 and was signed by the Baltimore Ravens.

Given his rather pedestrian collegiate career, it is not a surprise that Edwards went undrafted by an NFL team. He had decent measurables, but nothing that jumped off the page. The primary concerns about Edwards were that he lacked vision on cutback lanes and was not a factor in the passing game. (I will address the passing game issue in a minute.) His closest comp on PlayerProfiler.com is Jonathan Williams. I admittedly had almost forgotten about Williams myself, so it is easy to see how people could overlook Edwards given his so-so pedigree. Despite drafting and scouting being an inexact science, to say the least, we generally trust what NFL evaluators feel about a player until that player proves them wrong. Well, I would say we are fast approaching the point where Edwards has proven everyone wrong.

Baltimore used Edwards sparingly over the first half of his rookie season. He did not play on offense until October of that season. Edwards took over starter’s duties from Alex Collins in the second half and acquitted himself quite nicely. He ran for 656 yards over Baltimore’s final seven regular-season games. The following year, however, Edwards ran behind Mark Ingram (and new starting quarterback Lamar Jackson) in the Ravens’ rushing attack. Still, Edwards was solid when called upon. He averaged over five yards a carry for a second consecutive season. His lone start of the year came in Week 17 against the Pittsburgh Steelers. In it, he ran for 130 yards against a defense that had its playoff hopes on the line. Despite his contributions, Edwards was largely off the fantasy radar heading into 2020.

Last year, Edwards had to navigate an even more crowded Baltimore backfield. He had to compete once again with Ingram and Jackson, plus second-round rookie running back J.K. Dobbins. Ingram was a shell of his former self during the first half of the year. The Ravens chose to feature Dobbins more prominently than Edwards coming out of their Week 7 bye. Given the explosiveness of Dobbins, it was hard to blame them. And Dobbins proved himself worthy of the hype. Over the final 10 weeks of the regular season, Dobbins was a top-12 fantasy running back in all formats. As expected, Dobbins was a coveted fantasy draft pick throughout this past spring and summer, while Edwards was again an afterthought. From May 1 through last Saturday, Edwards was coming off the board as the overall RB43 in NFBC drafts and was drafted right at the end of the 10th round.

The Baltimore Ravens have eclipsed 3,000 yards rushing as a team in each of the last two seasons. Those two seasons are two of the three most prolific rushing offensive seasons in NFL history. Sure, those numbers are skewed because of Lamar Jackson’s contributions. But the running backs have done just fine in Greg Roman’s smashmouth scheme as well. Tailbacks have totaled 3,841 rushing yards and averaged 5.09 yards per rush over the past two seasons. Roman is reportedly working on opening up the passing game more, which may or may not be a viable strategy. But this will not suddenly become a team that throws the ball all over the field. The Ravens bolstered their offensive line with the offseason additions of guard Kevin Zeitler and tackle Alejandro Villanueva. After grading out 23rd overall last year, Baltimore’s offensive line ranks 12th in Pro Football Focus’ preseason rankings.

Edwards has yet to see 40 percent of his team’s offensive snaps or running back carries over the course of a season. That is not a huge surprise given the competition he has faced within his backfield. In 2021, however, there appears to be very little competition for carries outside of Jackson. Even if the Ravens run less than they have in previous iterations of Roman’s offense, Edwards will almost assuredly get a bigger piece of that pie. I would say 200 carries is a very reasonable projection for Edwards this year. And when you consider that Edwards has averaged at least five yards a clip in each of his three NFL seasons, a 1,000-plus yard season seems well within his grasp. Last season eight running backs eclipsed that threshold on the ground. All eight were fantasy RB1s in 12-team PPR leagues.

“But He Doesn’t Catch Passes”

The knock on Gus Edwards for fantasy purposes is that he does not catch enough passes to be relied upon, particularly in PPR leagues. In and of itself, his lack of involvement in the passing game is a fair criticism. Edwards has 18 career receptions in three NFL seasons. I would be lying if I said I expected him to catch a lot of passes this year. What I will tell you is that his lack of receiving does not matter as much as most people think it does. I mentioned earlier that Dobbins was a top-12 PPR running back over the final 10 weeks of the season. Did you know that Dobbins caught a grand total of seven passes for 46 yards over that span? Or that Edwards caught nine balls for 129 yards and was the overall RB20 in PPR formats in that same stretch?

Edwards averaged 0.45 PPR points per snap and 0.95 PPR points per touch over the final 10 weeks of the year. Dobbins numbers during that timeframe were 0.38 and 1.06, respectively. Edwards even graded out higher than Dobbins did as both a rusher and a receiver last year according to PFF. All these indicators suggest that the pair of Ravens running backs is relatively comparable to one another. It is not as if we are talking about two running backs on completely different planes here. This is not a Saquon Barkley/Devontae Booker or Mike Davis/Qadree Ollison dynamic in terms of production and/or skill level.

Current ADP and My Rank of Gus Edwards

Dobbins had an ADP of RB16 in PPR leagues before his injury. Since then, Edwards’ draft stock has gone up, but not nearly as much as it should. In the last 10 days, he is coming off the board at RB32, right at the turn of the seventh and eighth rounds. We had no problem drafting Dobbins in the third round based on a 10-game sample in which he averaged 1.29 PPR points per game as a receiver and was on the field for 53.33 percent of his team’s offensive snaps. Now Edwards, who averaged 1.37 PPR points as a receiver on 33.72 percent of Baltimore’s snaps last season gets thrust into a much bigger role, yet he is still available in the seventh or eighth round? It does not make a whole lot of sense if you ask me.

Even if Dobbins is the more dynamic playmaker, the difference should not warrant a 50-60 pick difference in where they are being drafted. That is especially true now that Edwards has less competition for carries than Dobbins likely would have. Gus Edwards is now an RB2 for me in all formats this season. I have him at RB13 in standard leagues, RB16 in half-PPR, and RB19 in full-PPR scoring. I would have no issue drafting Edwards in Round 4, and grabbing him anywhere beyond Round 5 is a win as far as I am concerned. There is still plenty of room to get on the bandwagon before the season begins. So, at the risk of bastardizing a lyric from the Paul Simon classic, 50 Ways to Leave Your Lover, my advice to anyone reading this is as follows: