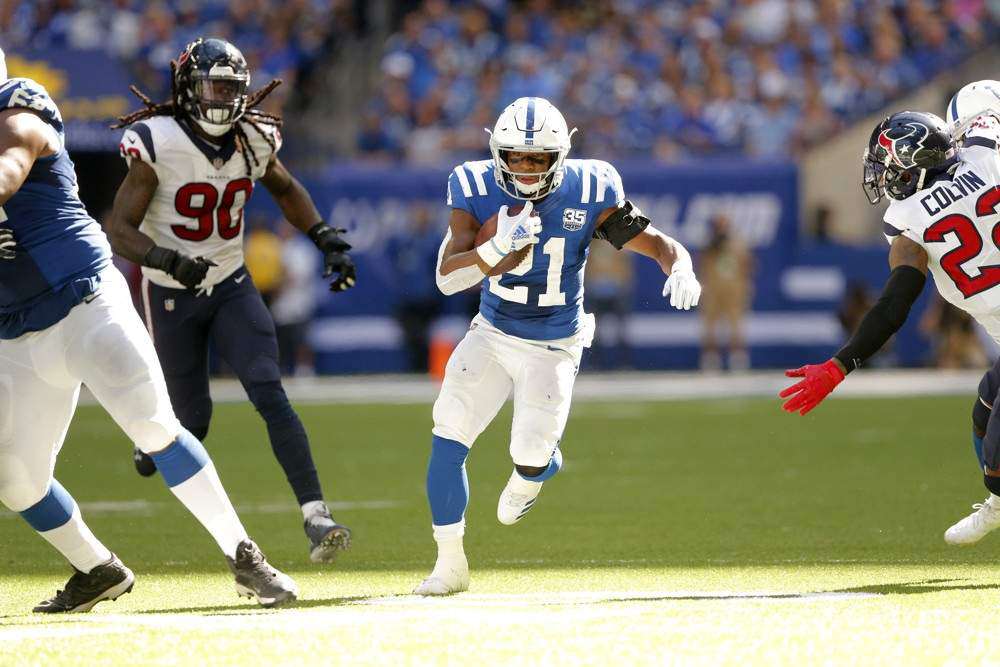 Wow, what a way to start the NFL season for Fantasy Football! With a wild Week 1 officially in the books, we’ll need to sort through the mess and figure out which available players we should invest in to bolster our lineups. This weekly Fantrax FAAB Guide will do just that, serving as a helpful resource to manage your FAAB, i.e. Free Agent Acquisition Budget.

Each week, I’ll outline available players (<70% availability) that should be picked up and my recommendations on how much of your FAAB should be used on your bids for them. If your league(s) utilizes standard waiver wires instead of the FAAB system, then you can still use these recommendations to prioritize your waiver claims. Also, make sure to catch the weekly Waiver Wire report by Corbin Young.

Since each Fantasy Football league’s format is different, I will suggest bid amounts by percentage rather than dollar amount. Also, since each league is different, use this guide as general advice but apply it with your knowledge of your own leaguemates. For example, if you want to bid on Nyheim Hines but your league is full of Colts fans, then you should probably bid higher than suggested below.

Mitchell Trubisky, Chicago Bears (33% ownership in Fantrax Leagues): I know, it pains me to write this as well. Trubisky struggled against the Detroit Lions in Week 1. But he completed 20 of 36 passes for 242 yards and 3 TDs, somehow managing a 104.2 QBR. Sure, they all came in the 4th quarter, but points are points and he finished as the overall QB7. With soft defenses like the Giants and Falcons up next, Trubisky is set up for Fantasy relevance this month.

Nyheim Hines, Indianapolis Colts (68%): Hines surprised everyone when he, not hyped rookie Jonathan Taylor, led the backfield in touches after Marlon Mack fell victim to a season-ending Achilles injury. With a checkdown-happy Phillip Rivers tossing Hines 8 targets, Hines received 8 catches for 45 yards and a TD to go along with 7 rushes for 28 yards and another score. Even with Taylor being anointed the team’s new lead RB, Hines will still have a prominent role under Rivers and is PPR gold.

Joshua Kelley, Los Angeles Chargers (64%): Kelley clearly won the “Melvin Gordon-lite” role over Justin Jackson, rushing 12 times for 60 yards and a TD against the Bengals. Though Austin Ekeler remains the lead back in this offense, Kelley received the coveted goal-line touches and was the only rusher to score. He not only has RB3/flex appeal, but would become the team’s lead back if anything were to happen to Ekeler. However, the Chargers’ offense is still shaky at best, so temper your expectations.

James Robinson, Jacksonville Jaguars (57%): Prior to their showdown against the Colts, Jaguars OC Jay Gruden said Robinson “can handle the workload.” Turns out he was telling the truth. Robinson received 100% of the team’s rushes, taking 16 carries for 62 yards along with one reception for 28 yards. And boy did he look good doing it!

Scatback Chris Thompson was barely a factor, only receiving 2 targets all game. If you believe the Jaguars will win, then you should believe Robinson will be a serviceable RB3 with TD upside.

Malcolm Brown, Los Angeles Rams (57%): It will likely remain an ugly committee, but Brown stood out from the pack by taking 18 carries for 79 yards and two TDs plus three catches for 31 yards against the Dallas Cowboys. Strangely, Brown had a similar stat-line last year, taking 11 rushes for 53 yards and two TDs. However, he also had Todd Gurley II serving as the team’s clear lead back. So, will history repeat itself? Head coach Sean McVay promises to go with the “hot-hand” approach, meaning rookie Cam Akers and Darrell Henderson will likely receive more touches going forward. But the difference this time is that Brown was visibly the best playmaker in the backfield. Time will tell, but I’m willing to bet on Brown.

Benny Snell Jr., Pittsburgh Steelers (50%): Snell had 19 rushes for 113 yards plus 1 catchless target in their victory over the Giants. Snell showed great speed, which he credits from losing 12 pounds in the offseason. He presumed the lead back role after James Conner hurt his ankle in the second quarter. But even with Conner active, Snell was more effective with 5.9 yards per rush vs Conner’s 1.5. This situation obviously needs to be monitored. But if Conner is out for an extended period, then Snell becomes a hot pickup as the new lead rusher for a rejuvenated offense.

Recommended FAAB Bids: 30% (if Conner is OUT)

Jerick McKinnon, San Francisco 49ers (47%): How great was it to finally see “Jet” on the field? After spending three years rehabbing injuries, he came back against an improved Arizona Cardinals defense and put up three rushes for 24 yards along with three receptions for 20 yards and a TD.

966 days since he last played in an NFL game.

And Jerick McKinnon just gave the @49ers the lead! @JetMcKinnon1

But don’t break the bank for him; he’s still competing for scraps against Raheem Mostert & Tevin Coleman, the former being the lead back and the latter playing limited snaps due to air quality concerns.

Peyton Barber, Washington Football Team (26%): To the dismay of fantasy managers, it was Barber–not Antonio Gibson or even J.D. McKissic–who led the team in touches during their surprise win against the Philadelphia Eagles. Though he was horribly inefficient (averaging 1.7 yards per rush), he still had the important goal-line carries and scored twice. Gibson is obviously the team’s future, but while he’s still adjusting to the big leagues, Barber has some value for now against vulnerable defenses.

Laviska Shenault Jr., Jacksonville Jaguars (66%): Shenault had three catches on four targets for 37 yards and a TD, plus two rushes for 10 yards. As advertised, Shenault was used like a swiss-army “freak,” even incorporating him in Wildcat formations. With the team’s defense giving up points, QB Gardner Minshew will need to rely on his versatile playmaker, so I wouldn’t be surprised if his impressive start is just a sign of things to come. Though the Titans are next on deck, his subsequent matchups against the Dolphins, Bengals, Texans, and Lions will give Shenault plenty of opportunities to build where he left off.

.@GardnerMinshew5 finds the rookie Laviska Shenault, Jr. across the middle for the TD! @Viska2Live #DUUUVAL

Parris Campbell, Indianapolis Colts (69%): Campbell caught six of nine targets for 71 yards, plus one rush for nine yards. Despite an upset loss against the Jaguars, it was immediately clear that Rivers favored Campbell, who tied star WR T.Y. Hilton in targets and surpassed him in production. With the Viking’s weak secondary up next, of which Packers QB Rodgers absolutely destroyed with all three of his receivers, there is a strong chance for Campbell to improve on his already impressive numbers.

Russell Gage, Atlanta Falcons (30%): Gage caught nine of 12 targets for 114 yards against the Seattle Seahawks. His receiving yards were a career-high. It appears that Gage has cemented himself as QB Matt Ryan’s No. 3 option, snatching most of Atlanta’s vacated targets that most assumed TE Hayden Hurst would’ve acquired. Although it’s unlikely that Ryan will continue to supply all three of his receivers with 100+ yards (the other two being Julio Jones and Calvin Ridley), Gage appears to be a reliable target for Ryan that will be a decent WR3 option with WR2 upside in PPR leagues.

Marquez Valdes-Scantling, Green Bay Packers (29%): Valdes-Scantling caught four of six targets for 96 yards and a score in a victory against the Vikings’ depleted secondary. The narrative that the team lacked receiving options outside of Davante Adams was shut down when QB Aaron Rodgers fed all three of his receivers TDs (the third being Allen Lazard). “Angry” Aaron certainly silenced any doubters, and it appears he’ll continue to throw like a madman whenever he can. It’s anyone’s guess which receiver (aside from Adams) will benefit, but as Sunday proved, there is potential for all three to thrive.

Quintez Cephus, Detroit Lions (16%): Cephus recorded three receptions on a whopping 10 targets for 43 yards against the Bears. He also played in 79% of the team’s offensive snaps as WR Kenny Golladay’s replacement. If Golladay’s inactive again next week against the Packers, then Cephus could continue to see a high workload. When Matthew Stafford is throwing you the ball that many times, there’s always a chance to score.

Recommended FAAB Bids: 5% (if Golladay is OUT)

Jimmy Graham, Chicago Bears (28%): Graham corralled three receptions from seven targets for 25 yards and a touchdown against the Lions. His rapport with Trubisky was evident after Graham received the second-most targets on the team. If this workload continues–particularly in the red zone–then he could easily see a resurgence as a fantasy TE1.

Logan Thomas, Washington Football Team (12%): Thomas caught four of eight targets for 37 yards and a TD against the Eagles. He led the team in targets and saw 74% of offensive snaps. Head coach Ron Rivera was impressed with Thomas during training camp, possibly leading to his increased role and target share. With a matchup against the TE-friendly Cardinals up next, Thomas has a path to repeat as a TE1.