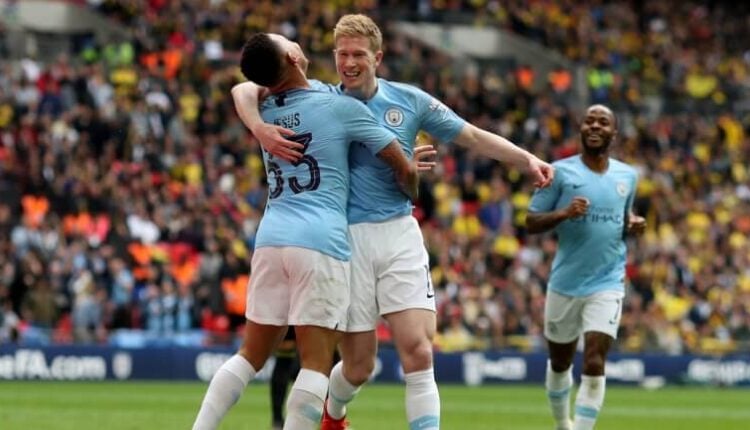 We have an important announcement regarding an update to the Fantrax Default Scoring System! Following on from the 21/22 Position Changes, we have also tweaked the scoring system assigned as the default settings for Fantasy EPL. The Updated Fantrax Default Scoring remains heavily based on the Togga scoring you all know and love, but we’ve evolved this based on feedback received throughout the past year.

Read below for full details on the updated Fantrax Scoring System we are using for Draft Premier League!! Please note: this scoring template is for new league creation only. Existing leagues can change their scoring setup to match this, but your league will not default to these settings. If you renew a previous league, your existing scoring system and settings will remain.

First of all we’d like to thank everyone who took part in the Fantrax Scoring System Questionnaire. The feedback was incredibly useful and there were lots of insightful comments. We have tried to reflect the desires of the Fantrax Fantasy EPL Community as best we can, while still maintaining a balanced and easy to follow scoring system. If you are disappointed that a particular change wasn’t implemented (or that changes were made at all), please know that we deliberated for weeks and no decision was taken lightly.

With that said, here are the changes to the Fantrax Default Scoring System for 2021/22:

The below table outlines the Updated Fantrax Scoring System in full. Cells marked in yellow show the individual scores that have been amended, and the row marked in blue shows the new scoring category that has been added: 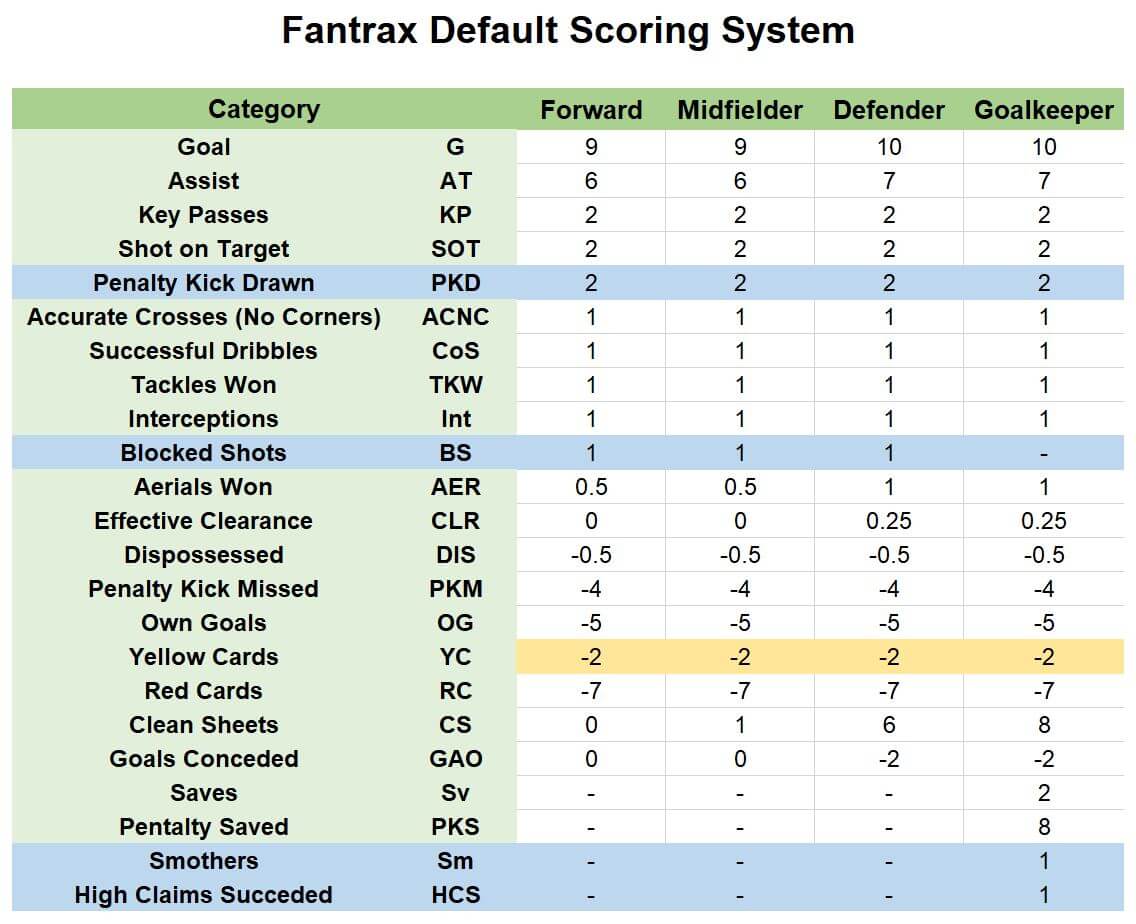 This is to fix those situations where a player wins a penalty for his team, but the penalty is subsequently missed, at no fault of the player who won the penalty. They deserve some reward for creating a high scoring chance, regardless of whether the goal is scored or not. Last season Vardy and Werner won the most penalties for their team (5 each).

‘Any goal attempt heading roughly on target toward goal which is blocked by a defender, where there are other defenders or a goalkeeper behind the blocker.’

By far the most requested scoring category in our questionnaire. Centre backs (CBs) have long been undervalued, but with this addition there are now more viable assets than the likes of Maguire and Tarkowski. Last season there were 8 CBs with a PP90 above 8 and 1000+ minutes played; with BS added that rises to 14, with the likes of Romain Saiss and Jonny Evans crossing the 8 PP90 threshold. CBs will remain the lowest scoring outfield position in the game, however. Blocked Shots are relatively rare events: Ezri Konsa made the most last season with 47 (1.3 per game).

HCS: ‘A high ball played into the penalty area that is caught by the goalkeeper.’

Sm: ‘A goalkeeper who comes out and claims the ball at the feet of a forward gets a smother, similar to a tackle, however, the keeper must hold onto the ball to award a smother.’

Like centre backs, goalkeepers have rarely provided much value, with many fantasy managers opting to forego drafting them completely. With these two additional scoring categories, goalkeeper remains the lowest scoring position, but the better goalkeepers will be worth drafting in the mid-rounds.

Smothers are very rare events, with Fabianksi’s 8 the most last season. High Claims Succeeded are a bit more common but still relatively infrequent; Martinez made the most with 39.

We have decided to reduce the penalty for yellow cards. Given sometimes receiving a yellow card actually helps out a team, losing three points seemed a bit harsh. The reduction to -2 won’t have a massive effect on the total score or PP90 of a player, but gives a slight boost to defensive midfielders, who already struggle for points in this scoring system.

The Updated Fantrax Default Scoring System outlined here will now be the default scoring settings when you create a league, but of course you can customize the points scoring settings however you please.

Below are two graphs demonstrating the differences in average score by position for the old scoring system (2020/21) and the updated one (2021/22). Filtered for players with 10+ starts. Some players who played multiple positions (e.g. Stuart Dallas), or who were assigned the wrong position by Fantrax (e.g. Ben Godfrey) were excluded from the data shown in the first graph. 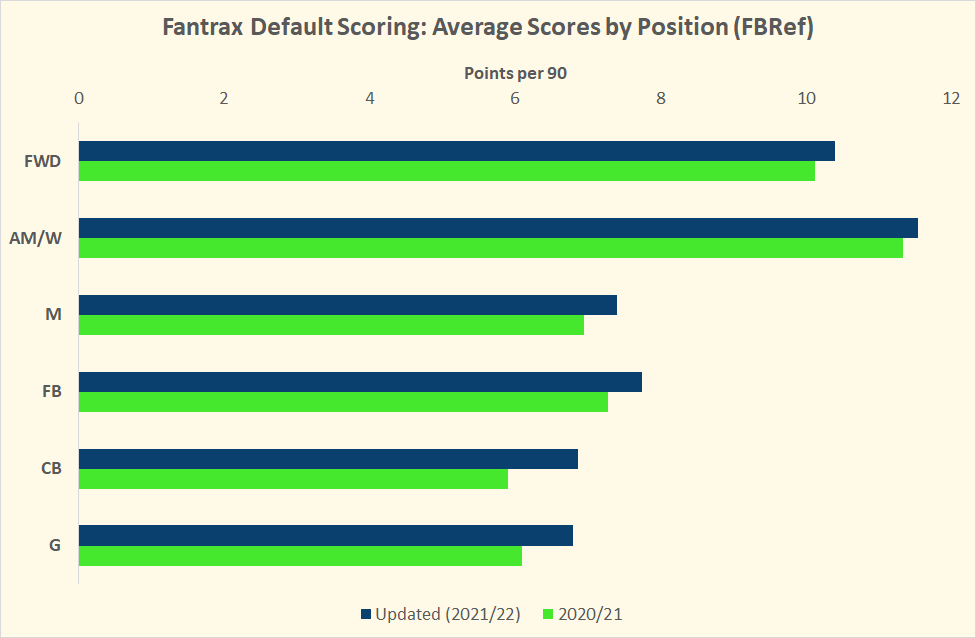 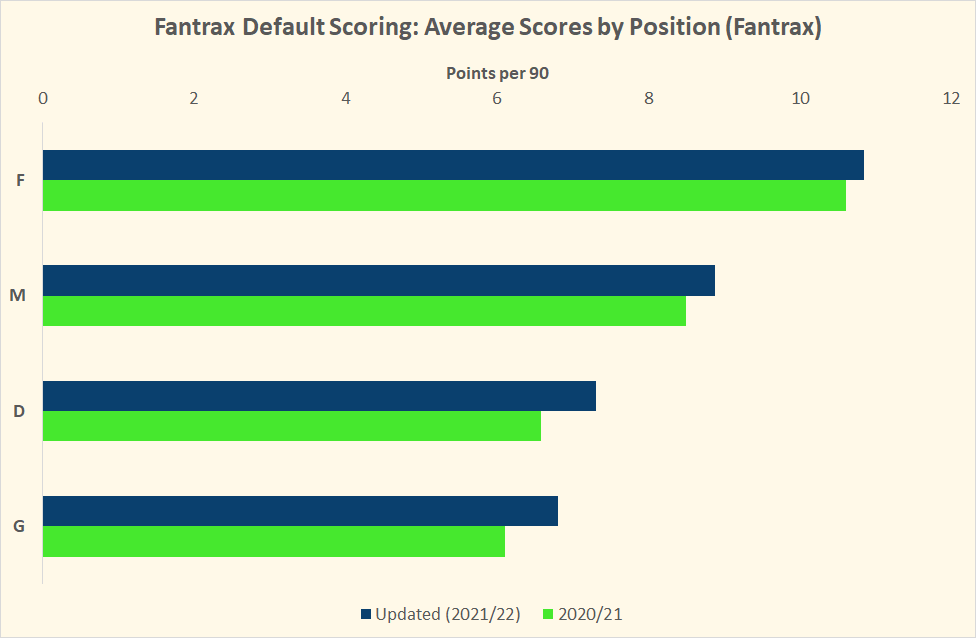 If you want to see how the updating settings affect a particular player, please click here.

Please find below images of the Updated Fantrax Default Scoring System, with the exact scoring categories and points assigned: 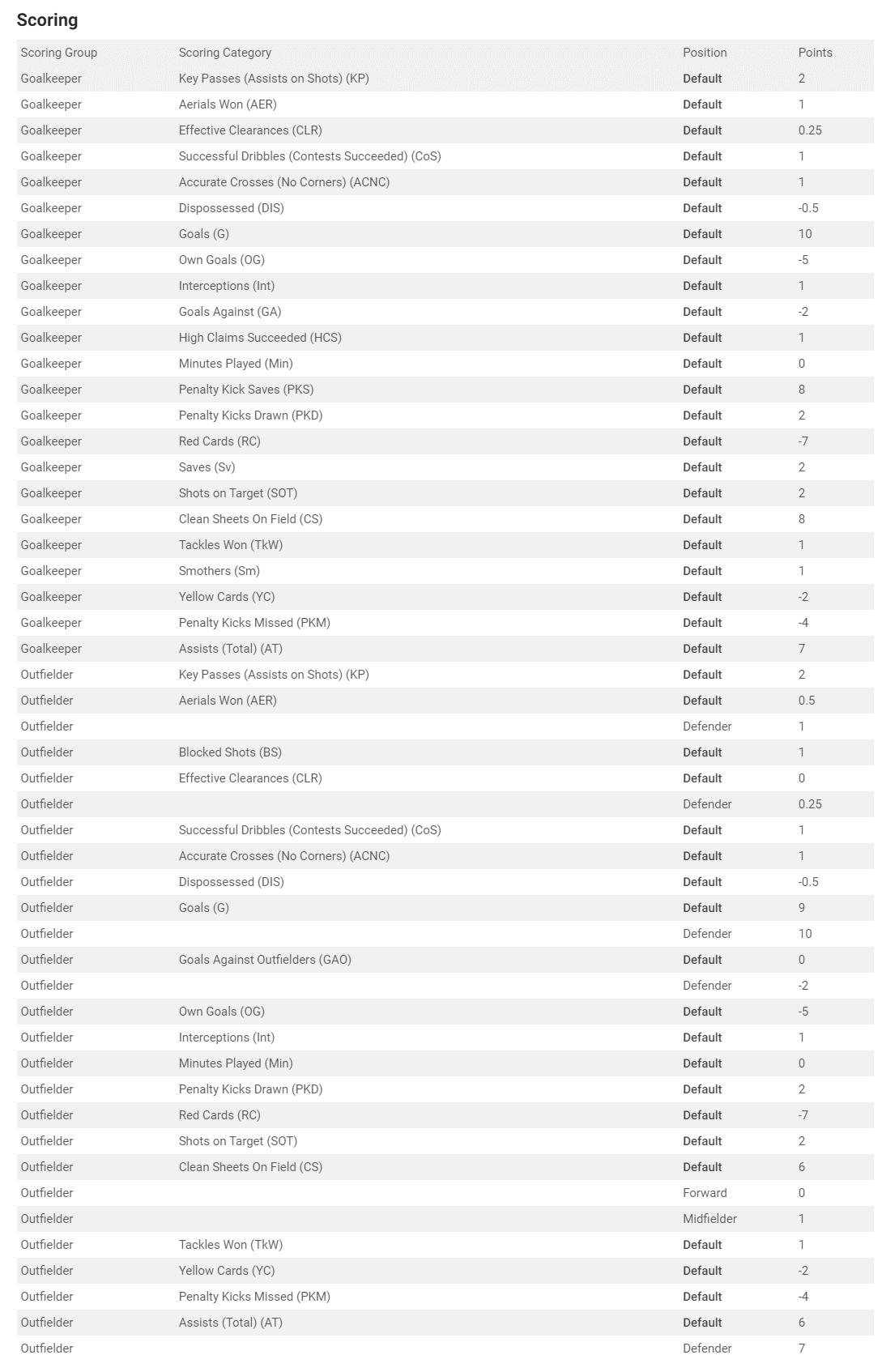 Please note: this scoring template is for new league creation only. Existing leagues can change their scoring setup to match this, but your league will not default to these settings. If you renew a previous league, your existing scoring system and settings will remain.

Check out The Draft Society’s 21/22 Draft Kit for all the draft prep you would ever need! Draft Rankings, Team Previews, Strategy, Draft 101, and so much more!!

Who Is The First Overall Draft Pick in 2021?