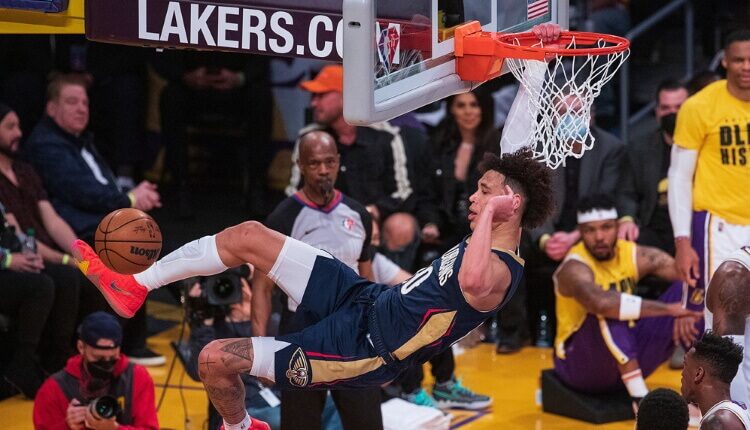 We’re down to just three weekends left in the NBA regular season, and they carry a lot of weight for the purpose of fantasy basketball. For anyone still in the playoffs, it is survive and advance or lose and go home, making these final three days of the week of utmost importance as you look to advance to the next round with a victory. In most cases, you might need to scour the waiver wire over these next few days, adding and dropping players to give your team that extra push it needs to end the week on top. So let’s dive in and take a look at some of this weekend’s top streaming options who, as always, must play two games over this three-day stretch.

Rui Hachimura has an excellent opportunity to produce some big numbers this weekend with Kyle Kuzma not expected to return. The third-year forward saw 30 minutes Monday for the first time all season with Kuzma out of the lineup, and he delivered a strong performance with 16 points, 8 boards, and a pair of threes. Hachimura has now reached double figures in scoring in eight straight games, and he has knocked down multiple triples in five of his last seven. On top of that, the 24-year-old has impressively shot 54% or higher from the floor in six of his last seven, a level of efficiency that can be quite rare on the waiver wire. With one of his two matchups this weekend coming against the Pistons (the other against the Warriors), Hachimura has a great chance to capitalize on the increased playing time and continue his strong play.

Jaxson Hayes enters the weekend coming off a nice stretch of games in which he saw major minutes for the Pelicans. Hayes has received 27 or more minutes in every game since seeing 24 minutes on March 9th, and he even had back-to-back games with 38 minutes on Sunday and Monday. In that time, Hayes has become a nightly double-double threat, chipping in at least one block per contest. The 21-year-old is coming into his own down the stretch, and the coaching staff seems content to let the youngster grow and develop over these final few weeks, making him a strong play in fantasy. With a pair of nice matchups in the Spurs and Lakers, Hayes could definitely be a guy who wins you some categories over the next three days.

Another big man who can provide a lot of fantasy value this weekend is Drew Eubanks. Currently on a fourth 10-day deal with Portland, Eubanks has been playing out of his mind over his last seven games, doing everything in his power to make a case for a longer-term contract. Seeing 27 or more minutes in each contest, the 25-year-old has averaged 16.1 points and 8.9 rebounds during that stretch, shooting a ridiculous 65.3% from the floor and 94.4% from the line. A reasonable person might think that this kind of production can’t possibly last, but with a pair of back-to-back games against the Rockets between two teams that honestly have no reason to win basketball games right now, the hot streak might very well continue for a little while longer.

Speaking of Portland trailblazers who could be difference-makers this weekend thanks to going up against the Rockets twice, Ben McLemore presents a somewhat risky but intriguing option for anyone in need of some three-point shooting heading into the finals days of the week. The veteran has made 14 threes across his last four games, scoring 18 points per game to go with the strong shooting from beyond the arc. Outside of those two categories, he won’t provide much of anything else, but he can certainly be counted on to deliver in his areas of expertise. It’s slim pickings this weekend for three-point shooters with even one strong matchup, so McLemore might be the play due to nothing more than desperation.

For whatever reason, Coach Thibs continues to give Alec Burks minutes in the mid-30s instead of working to further develop the youth on the team, but you might as well take advantage of it in fantasy because Burks is at least still putting up stats. The veteran has hit double-digit scoring in nine of his past 11 games, knocked down multiple threes in four straight and eight of his past 11, and he’s also racked up 10 steals in his last seven. The minutes are there, the stats are there, and matchups against the Heat and Pistons offer some nice potential for him to keep producing. If you’re looking for typical guard stats, Burks could definitely come in handy this weekend.

Fantrax was one of the fastest-growing fantasy sites over the last few years, and we’re not stopping now. We are the most customizable, easy-to-use, and feature-rich platform in the industry, offering the greatest fantasy experience for your dynasty, keeper, redraft, and best ball leagues. Fantasy sports doesn’t sleep, and neither does Fantrax, with seasons running 365 days a year. Take your fantasy leagues to the next level now at Fantrax.com!
weekend streamers
Share

Offseason Impact on the NFC for 2022 Fantasy Football