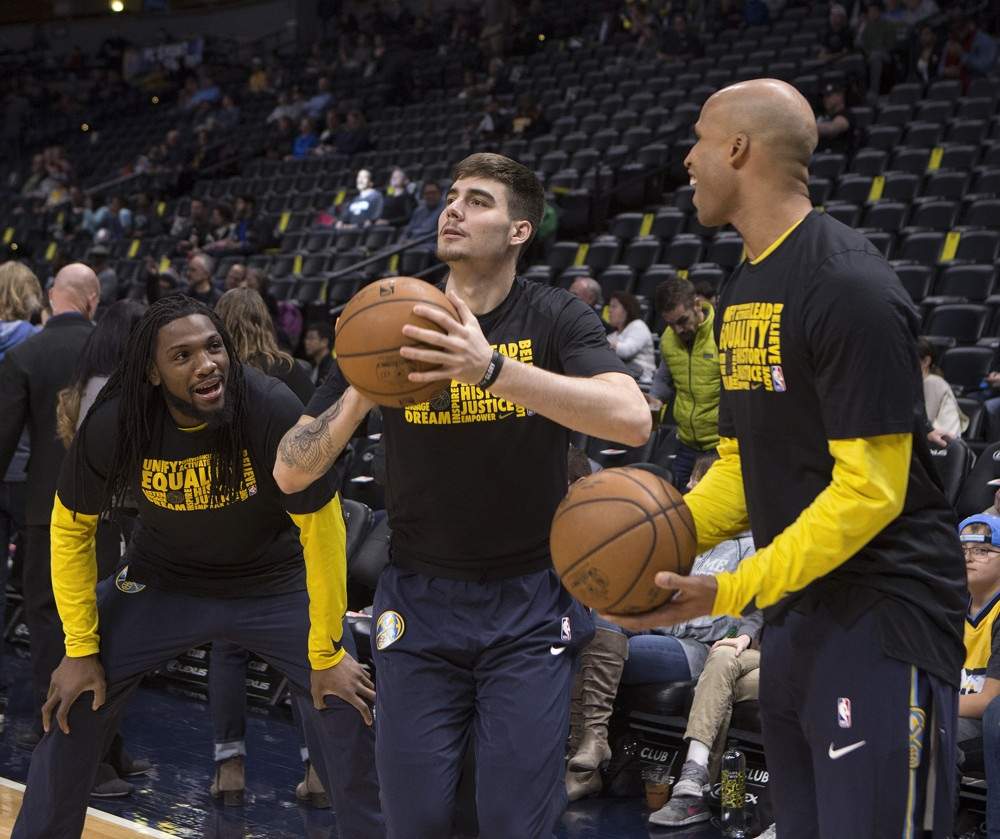 As we near the two-month mark of the NBA season, players are starting to tack on some wear and tear. This is the point in the season where teams begin to test their depth whether it’s due to injuries, rest, or for the sheer fact to see how a player fits in certain rotations. Eight weeks should also be enough time for fantasy basketball owners to know if a player belongs on their team. Someone might drop a player that is a roster worthy but doesn’t fit their build.

Jonathan Isaac: Isaac has dropped below the 60% threshold in Yahoo leagues likely due to frustration. Isaac hasn’t been returning his eighth round draft value, but he’s got a set of abilities that are rare to find on the waiver wire. The former sixth overall pick is contributing an acceptable 10/5/1.5 line on nearly 46% shooting over his last six games. He’s also chipping in a three-pointer, 1.2 blocks and nearly a steal per game over that span.

Nikola Vucevic and Terrence Ross are candidates to be moved by the deadline, so Isaac’s role could dramatically increase over the course of the season. He’s still providing top 125 value in 9-cat leagues over the past two weeks and should have been held onto by owners despite the rough start.

Shai Gilgeous-Alexander: I’ve mentioned Shai many times before and the positives still stand. He’s being groomed as the Clippers’ future centerpiece and is already playing alongside the starters. SGA will be inconsistent, but if you can afford to hold onto him knowing the numbers will fluctuate for a while, he’s a worthy gamble. He’s got 15-5-5 upside when the fantasy basketball playoffs arrive.

Juancho Hernangomez: The Nuggets are feeling the injury bug. Luckily they were touted as one of the deepest teams entering the season. Between Juancho and Trey Lyles, Hernangomez’s skillset most mirrors Millsap’s, which is why he’s been getting the bulk of the minutes. Even before the injury, Juancho is averaging 12.9/7.1/1.2 and drilling 2.1 threes on high percentages over his last 14 games, all of which were starts. Now, Hernangomez moves from the starting 3 to the starting 4 and has a chance to prove himself until Millsap and Will Barton return.

Alec Burks: Alec Burks has had a bigger role than he ever had in Utah since he arrived in Cleveland. He’s is averaging 14.3/5.8/3.2 in 29 minutes per game on a team in desperate need of talent. Burks can do a bit of everything, as displayed by his 22/7/9 line against the Kings. Finding such a well-rounded player in week 9 is definitely worth taking a look at and rostering at least for the time being. Burks is a free agent after this season, so he’s fighting for his basketball future in Cleveland, and he’ll get a slew of minutes there.

Noah Vonleh: Vonleh is having a resurgent season in New York on a one-year deal. He can do a bit of everything. Points, boards, assists, steals, blocks, and threes on good shooting percentages. It’s hard to find a multi-dimensional player like Vonleh in the NBA, much less in fantasy sports. The Knicks have realized that and given him 21 out of a possible 26 starts and have invested over 25 minutes per game on him. Vonleh can keep this going all year long, he’s still available in more than 50% of leagues.

Terrence Ross: Ross has been playing well for Orlando over the past 18 games, hitting double-digit points in all but one game. He’s returning top 100 value this year due to higher shooting percentages. If you need a scorer, look no further than T-Ross. He’s shooting nearly 46% from the floor and chipping in 2.3 threes on nearly 40% shooting from deep. That’s a pretty good pickup in week 9 for a team looking to shore up their percentages off the waiver wire.

Al-Farouq Aminu: Fantasy basketball owners in need of rebounds should look no further than Aminu. He’s averaging a career-high 8.1 boards and chipping in a steal and 1.3 threes per game. Though not the sexiest name on the waiver wire, he’s a great fit for a team that’s punting points and/or assists. Aminu is available in about 45 percent of leagues as of week 9.

Tim Frazier: Frazier is making his second stint in New Orleans under Alvin Gentry to provide some much-needed playmaking. Over his last seven games, Frazier is boasting an 8.7/4.3/7.9 line with a steal on 61.8/47.4/83.3 shooting splits. Coach Gentry likes playing Jrue Holiday at shooting guard and Elfrid Payton is still a ways from returning, so Frazier should keep getting opportunities from week 9 on.

Deandre’ Bembry: Bembry keeps making waiver wire lists, but is still owned in just 40% of Fantrax leagues. Bembry is a great source of defensive stats and can chip in some rebounding and passing numbers as well. Though Kevin Huerter has seen a lot of Taurean Prince’s minutes, Bembry should be the primary benefactor as an all-around aid for the Hawks. He’s flirting with top-100 value in 9-cat leagues. You don’t normally find that kind of production sitting on the waiver wire nine weeks into the season.

Justise Winslow: Over the past eight games, Winslow is putting up a 13/5.5/3.3 line on 45.1/44.4/72 splits. He’s also adding 1.5 threes and a steal per game. Winslow is coming off an extremely productive set of games where he flirted with a triple-double twice. Miami is still without Goran Dragic, Tyler Johnson and Dion Waiters, which means the minutes will keep pouring in for the time being. His name value might make him a priority for others on the waiver wire.

De’Anthony Melton: The Suns are still looking for a point guard. Melton has split minutes with Elie Okobo so far but has played better than his counterpart. He can chip in everywhere including steals, but he will be turnover prone. His defense might give him the inside track on the starting job over Okobo.

Troy Daniels: Daniels has been getting more run recently with the loss of Devin Booker. The Suns will lean on Daniels for scoring and long range shooting. Fantasy basketball owners can lean on Daniels for the same reasons as he won’t contribute much anywhere else. His fantasy appeal is tied to Booker’s health.

Kevin Knox: Over the past five games, Knox has hit his career-high mark of 26 points twice. Following a 15 board performance against Charlotte, Knox is averaging 7.2 boards over the past five games. Knox will have his moments, but his shooting percentages are likely to hover around the 40% mark all year. If you’re punting FG%, he could be worth taking a look at for upside purposes starting week 9.