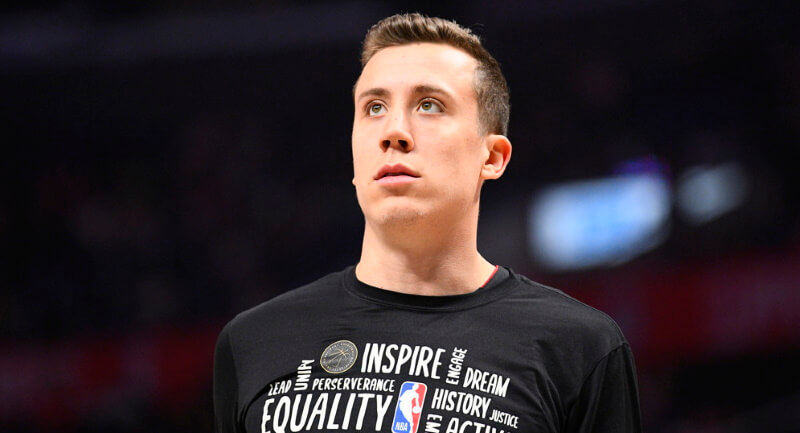 Duncan Robinson is bringing the heat like Will Smith in Miami. Robinson started the season off a tad slow but he’s a mainstay in the Miami Heat lineup and is a great contributor in points, three-pointers and has been solid in the rebounding department as well. Robinson is averaging 6.3 rebounds, 3.3 assists, 1.7 steals, and 1.0 blocks over his last three games and has put up 15.7 points and an impressive 4.3 3PTM in three of his last four games. Not too shabby baby! Pick up Robinson and enjoy Duncan’s Toy Chest which is full of three’s!

It’s never a bad idea to snag someone from the OKC Thunder due to their depleted bench so Luguentz Dort is our guy! Dort is on a tear right now hitting double-digit points in eight straight games and averaging 19.8 points, 5.0 rebounds, and 2.0 3PTM over his last four games. Head Coach Mark Daigneault was absolutely gushing over Dort calling him a “monster” so add this thunder in a bottle before it’s too late!

Frank Kaminsky continues to flourish without Deandre Ayton (leg) out of the Suns lineup. Ayton missed his fifth straight game Sunday and there are no signs of a return which means Kaminsky needs to be added. Kaminsky has been great, averaging 16.3 points, 6.0 rebounds, 1.3 blocks, and 1.0 3PTM over his last four games.  Even JaVale McGee has been useful so there could still be opportunity for Kaminsky to produce when Ayton returns but in the meantime enjoy the Frank the Tank show folks!

It’s Bones Hyland time in Denver! Head Coach Mike Malone said the rookie will get more minutes and he’s delivering on his promise. Hyland has posted back to back games over 20 minutes and is producing with 13.5 points, 4.5 rebounds and 4.0 assists. With Monte Morris in his way it might not be long before starting PG duties are handed over to Hyland. I like the rookies chances baby! Scoop up these bones now and reap the rewards.