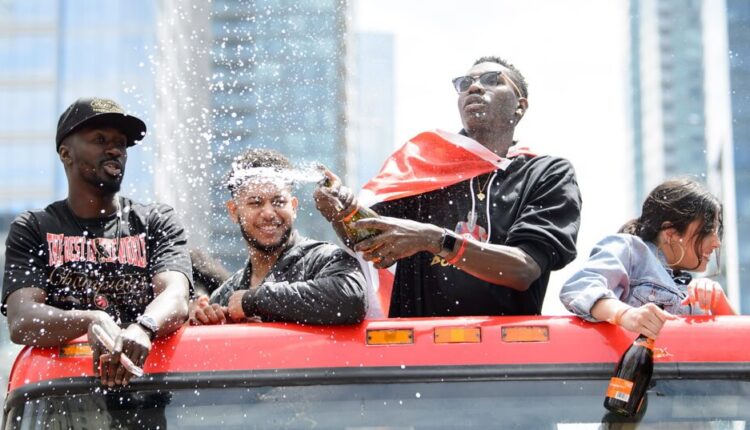 The suspensions and injuries continue into Week 4, but the fantasy basketball waiver wire is starting to thin out of players with real value. Dig deep into our analysis to find the best player for your squad. Below are four key players likely available on your waiver wire who can help you gain an advantage on your competitors.

The Warriors are in full tank mode now after announcing that Stephen Curry is out for the year. This means Burks is going to be heavily relied upon to produce. While he won’t be the most consistent fantasy player, he will likely be the second-leading scorer behind D’Angelo Russell. Burks has played well over the last week, averaging 20 points, 7 rebounds, and 2 assists per game. I would expect similar numbers to continue for the foreseeable future. Burks is my number one waiver wire add of the week.

Boucher is the beneficiary of more minutes now that Serge Ibaka and Kyle Lowry are out. He hasn’t had any big games yet, but his per-36 numbers are great from last season at 20 points, 12 rebounds, 2 three-pointers, and 5 blocks! The next few weeks will be a great test for the 26-year-old, as he will be relied upon to stretch the defense and protect the rim for the Raptors. Boucher should be a good source of three-pointers, steals, rebounds, and blocks.

I’ve added Clarke to the must-add category this week as we have seen his ownership percentage drop slightly. Clarke has been better than expected to start the season, even after a great pre-season showing in Vegas. He is averaging 11.3 points, 6.4 rebounds, a combined 2.6 blocks/steals, and 1.0 assist in 22.4 minutes. He is firmly entrenched in the Grizzlies rotation and is heading into November as one of the top rookies for fantasy basketball. He has a four-game slate in Week 4, so he is worth streaming if you need good efficiency solid defensive numbers.

Simons has been building his minutes and usage as the season moves into Week 4. He is still young, so expect inconsistency. However, he is going to be a good source of points with good free-throw shooting. He played 35 minutes against the Nets during the week with 15 points, 4 rebounds, and 2 assists. He is decent add in deeper leagues as his minutes continue to build.