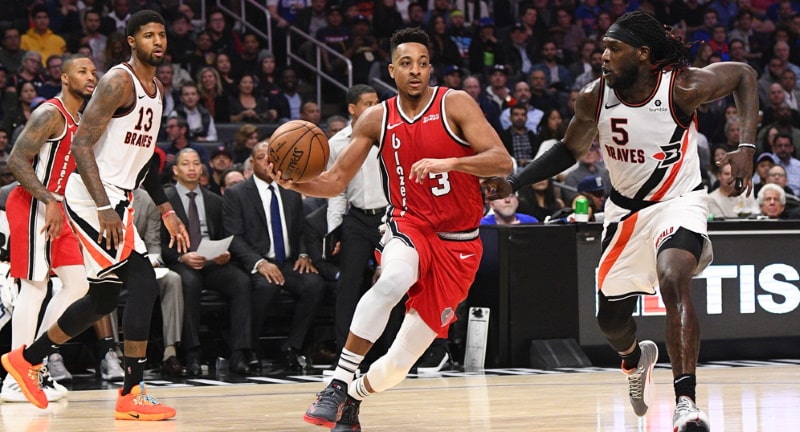 CJ McCollum hasn’t played a minute of basketball since Jan. 16 due to a broken foot. That’s old news. What is news, however, is what Portland head coach Terry Stotts said last week regarding the All-Star guard’s recovery.

“The rehab is going well, they are pleased with the way the foot is healing, but there is really not much more to it than that,” Stotts said, as reported by The Athletic’s Jason Quick. “I mean, he’s not running, stationary shooting. He needs to let [the injury] run its course.”

McCollum was slated for a re-evaluation on Mar. 2, but it still sounds like he’s due to miss extended time, even with the All-Star Game fast approaching. While chances are you already found a replacement, here are three options in case you’re scrambling to cover McCollum’s roster spot for the foreseeable future.

This is the most obvious choice, and probably the most difficult solution at this point in the season. Gary Trent Jr., owned in 77% of Fantrax leagues, was thrust into the starting lineup after CJ McCollum went down and has held his own. In 18 starts, Trent is averaging 18.9 points, 2.5 rebounds, and 1.7 assists in nearly 36 minutes of action. In 20 games without McCollum, Trent has broken the 20-point threshold six times and has taken 20+ shots three times, proving that the volume required is there. Though his point total in that same time frame bottomed out at a measly two (Jan. 18, 2021), Trent shoots the ball with consistency: 43% on field goals and 41% from deep.

He’s not a perfect fit — no one replacing McCollum will be — but he’s the best among the next guys up. Trent’s ability to score the ball in bunches, along with his improved usage rate as a starter (21.2%), will carry his value in all formats. He’s averaging 26.43 Fantasy points per game in standard-scoring leagues since the beginning of February, and will likely sit at that mark as long as he remains in the starting lineup.

Known for his stout defense, Luguentz (pronounced loo-GHENTZ) Dort has come into his own on the offensive end this season. Before scoring only two points in a blowout loss to the Nuggets last weekend, Dort scored double-digit points in 10-consecutive outings. He averaged 15.8 points in roughly 33 minutes per game over that stretch, and he never took less than 10 shots in a game. As an everyday starter in Year 2, Dort has seen his numbers jump up across the board, in part because of his 19.9% usage rate.

While his shooting percentages leave something to be desired — under 40% overall, under 35% from deep — Dort still does enough in standard-scoring formats to help fill the McCollum void. The 21-year-old averages nearly 21 FPG, is owned in 65% of Fantrax leagues, and will only improve as he fine-tunes his shot.

While no one truly expected an undrafted Kendrick Nunn would make the All-Rookie team a season ago, no one thought his playing time would be this inconsistent in Year 2. He has six DNPs, two inactives, and has logged less than 10-minutes of play four times this season. But, thanks to Goran Dragic’s recent injury, Nunn has made the most of his steady stream of minutes.

Since his last DNP on Feb. 2, Nunn has started 13-straight games for Miami, averaging 15.6 points per game over that stretch. Over the last two weeks, his performances on the court translated to 30.93 FPG in 80% of Fantrax lineups. He makes two 3-pointers a game — he recently went seven games in a row with at least one made three — and shoots the ball well from the field (46.7%) and from deep (37.5%). He can pick your pocket too as he tacks on over a steal per game, rounding out his value in both cat-8/cat-9 formats as well as standard scoring leagues.

As long as Nunn remains relevant in Miami’s constantly shifting minutes paradigm, then he is as good of an option as there is for replacing McCollum.

Whether you have to deal with replacing C.J. McCollum or not, you can find more help for your fantasy basketball squad in Mike Omelan’s Week 11 Waiver Wire.