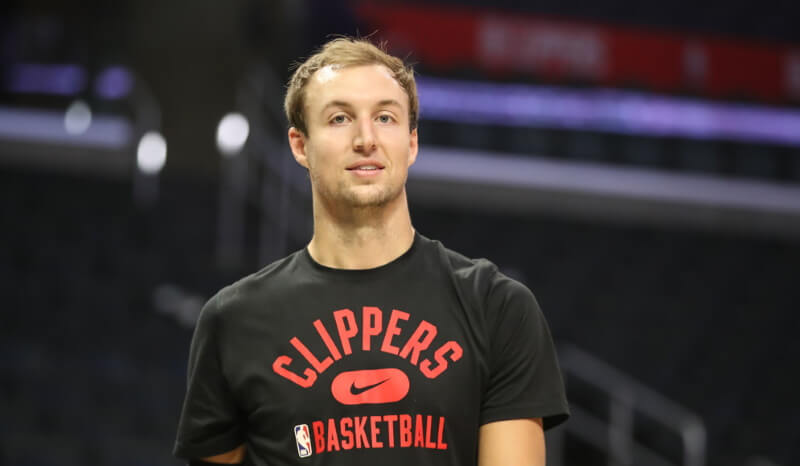 As we hit the midpoint of December, NBA news is beginning to heat up, with reports that Kyrie Irving might actually see the court this season. If true, this would be a significant development both for the NBA, as well as in fantasy hoops. While Kyrie’s presence is obviously a major boost to anyone rostering the all-star guard, his return to the floor would also potentially destroy the stock of several players including the likes of Patty Mills, who has benefitted greatly from Irving’s absence. In a similar fashion, there are a number of teams throughout the league being impacted by both injuries and covid, and these developments are providing a lot of opportunities for some otherwise fantasy-irrelevant individuals. So let’s take a look at some of these players, and see whose stock is on the rise, along with some players whose stock is trending in the opposite direction.

With both Paul George and Nicolas Batum missing a number of games for the Clippers in recent days, Luke Kennard has stepped up in a big way, becoming one of their top options offensively over the last seven games. Over this time, Kennard is shooting a blistering 52.6% from the floor and hasn’t missed a single free throw, putting up impressive averages of 17.0 points, 4.7 rebounds, and 4.0 threes per game. The former lottery pick is even being used more as a playmaker over the team’s past two contests, tallying nine assists to help defeat Orlando and Phoenix. With the team having now won four straight and five of their last six, there is no reason to believe Kennard’s recent heavy involvement within the offense should stop any time soon. His shooting alone gives him plenty of value in fantasy leagues, but if his playmaking continues to improve, he could be a borderline top-50 player in fantasy. His stock is trending up.

At 36 years old, P.J Tucker is remarkably still finding a way to bring value to his NBA team as well as to fantasy teams. The veteran has stepped up big time in light of several injuries to key rotation players including Jimmy Butler and Bam Adebayo. Seeing the floor for 32 or more minutes in each of the past three games, Tucker has averaged 15.3 points, 9.0 rebounds, 6.0 assists, 1.0 steals, 0.7 blocks, and 3.0 triples per game, shooting a ridiculous 54.8% from the floor. He’s flashing impressive across-the-board production and should see as many minutes as he can handle in the frontcourt for at least the next month or two while Adebayo remains out, giving him some really solid value in fantasy. His stock is on the rise.

If you’ve never heard of Kessler Edwards, I don’t blame you. But that said, you should learn the name. The rookie second-round pick was thrust into the spotlight for Brooklyn last night due to half the team being unavailable with covid or a variety of other ailments, and he did not disappoint. Edwards doubled-doubled in nearly 44 minutes, putting up 17 points and 10 rebounds to go along with a pair of steals and three triples. The rookie out of Pepperdine is a strong 6’8″ who can contribute on both sides of the ball, and he will get as many minutes as he can handle over the next handful of games while the team continues to compete without seven of their guys. He looks to be quickly making a case for more minutes even when the team does return to full strength or close to it, and he brings all of the attributes coach Steve Nash is looking for in a role player to complement Brooklyn’s star power. Edwards’ stock is quickly on the rise, and he is an intriguing name to watch over the course of the season as he continues to develop.

Unlike Kessler Edwards, Alperen Sengun is a rookie who received a lot of hype entering the season, and it appears that his stock is trending back in the right direction of late. The talented first-round pick is finally seeing a significant uptick in minutes for the rebuilding Rockets, and this looks like it could be the beginning of a great rest of the season. After seeing minutes in the mid-teens for eight straight contests, Sengun has now seen 23 and 25 minutes in his past two games, producing some very encouraging stat lines across the board. In those two games, the 19-year-old phenom from Turkey averaged 13 points, 6 rebounds, 5 assists, a steal, and 2.5 blocks, showing the potential to be a fantasy gem with his assists and defensive production as a center. Sengun is one of the most talented players on Houston’s young roster and appears poised to be a key piece for them in the years to come, so they have no reason not to unleash him now and see what he can really do with an expanded role. Sengun’s time has finally arrived.

Chris Boucher might be the single most frustrating player in fantasy basketball this season, but it appears that he might finally be turning things around. I hope I didn’t just jinx it. Boucher has seen 26 minutes per game across his last four, and even though Toronto is missing some key rotation players in the frontcourt, Boucher is finally getting the chance to remind everyone, namely Nick Nurse, that he is too talented to waste away on the bench. The big man has averaged 12.8 points, 7.3 rebounds, 1.5 blocks, and a three per game in that stretch, which is just a small taste of what he was able to do in major minutes a season ago. It’s far from a guarantee that he’ll keep seeing these minutes long-term, as Nick Nurse seems unreasonably determined to ignore Boucher’s talent, but he’s doing what he needs to do on the court right now to stake his claim for more minutes over the long haul. So as of now, his stock is on its way up, and hopefully, it’ll keep heading in that direction.