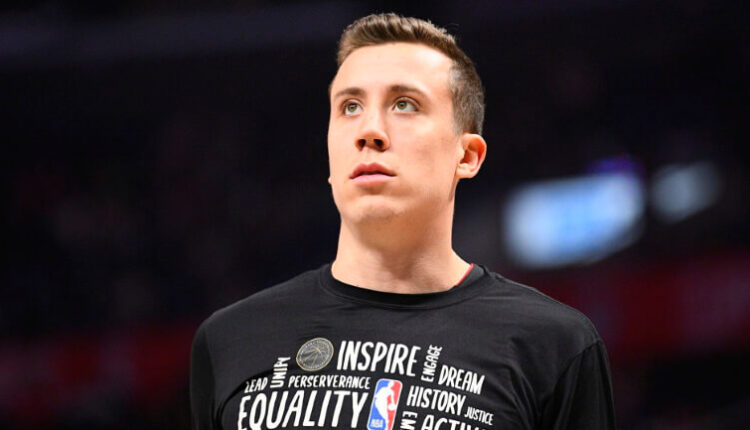 As we approach the end of January, we continue to see a number of players bouncing in and out of rotations due to injuries, health and safety protocols, and coaching decisions. Roles are constantly shrinking and expanding, and we see the stock of both players and teams rising and falling as a result. Over the past week, we’ve seen several players take advantage of these opportunities, while things haven’t gone quite so well for many others. So let’s dive right in and take a look at some players whose stock is on the move as we finish off the first month of 2022.

With Kyle Lowry out of the lineup, Duncan Robinson has seen some extra minutes of late and he has taken full advantage of the opportunity. Over his past three games, Robinson is hotter than the sun, knocking down 18 threes on his way to 23 points per game. He’s shot a blistering 62% from the floor in that time, with an even more impressive 56% mark from beyond the arc. Obviously, this level of efficiency will not last, but the overall value he brings as a three-point specialist can certainly continue. Robinson is an extremely productive contributor in fantasy hoops for this reason, and as long as he continues to see minutes in the mid-20s or higher, he should be able to single-handedly keep you in contention for three-pointers made each week. Robinson’s stock is perhaps at its highest point of the season right now.

After a lengthy absence due to health and safety protocols, Luke Kennard is back and possibly better than ever. The 25-year-old led the charge as the Clippers rallied from a 35-point deficit to take down the Wizards on Tuesday, dropping 25 points, 8 rebounds, 6 assists, and 5 threes, including a game-winning 4-point play to cap off the historic comeback. In addition to that, Kennard has topped double figures with multiple made threes in four straight contests, while his minutes have risen back into the 30s in each of his past two games. Adding some solid, if unspectacular rebounding and passing numbers, along with hot shooting and low turnover numbers, Kennard looks to be turning into a strong fantasy hoops option as the Clippers do whatever it takes to stay in the playoff race. Currently the hot hand, the Clippers will likely keep feeding Kennard opportunities on offense for as long as it keeps working, and he is showing no signs of slowing down. His stock is back on the rise and it is moving fast.

For the first time in almost a month, Kenyon Martin Jr received 26 or more minutes in back-to-back games, producing solid numbers in both of them. Martin averaged 13.5 points, 6.0 rebounds, 2.5 assists, and 2.0 steals, shooting a ridiculous 75% from the floor. The young forward has always shown tremendous potential, but consistent minutes have always remained the biggest issue. But with the Rockets sitting in dead last in the Western Conference with 34 games remaining, the Rockets have no reason not to give more minutes to their youngest, most promising players to develop and gain a better idea of their talent for the future. Having just turned 21 this month, Martin still has a world of potential, and the Rockets would be wise to keep giving him additional minutes. For now, Martin’s stock is slowly on the rise, but a few more productive games with significant minutes and his stock will skyrocket. The time to jump on KJ Martin might be now.

Jose Alvarado is an intriguing option for the Pelicans, as he has shown a lot more than most people expected in his limited playing time thus far. As a result, Alvarado seems to have worked his way into a consistent backup point guard role for New Orleans, and his minutes are slowly increasing with every game. The undrafted rookie out of Georgia Tech has some impressive per-36 minute averages of 11.9 points, 3.6 boards, 5.8 assists, 3.6 steals, and 1.4 threes. Obviously, the steals and dimes present the greatest benefit in fantasy, as Alvarado looks like an elite defender in the limited time we’ve seen him. He’s lightning-quick and has great hands, and his hustle seems to be earning him an expanded role as the Pelicans find themselves 11 games below .500 on the year. With Devonte’ Graham out last game, Alvarado got 33 minutes and played well, so it’s possible that this has helped his case for minutes even more moving forward. As things currently stand, his stock still isn’t exactly sky-high, but it’s definitely on the rise, and it could begin to shoot up faster as the Pelicans start to lean on their younger guys more as the end of the season draws closer. Alvarado could end up being a sneaky steals specialist who can provide some solid value down the stretch of the season.

After averaging 24.8 points and 7.3 assists across an impressive four-game stretch that saw the Clippers go 2-2, Reggie Jackson has seen fewer than 20 minutes in each of the team’s past two games. In these two, Jackson went ice cold from the floor, going 4-for-20 for a combined 13 points between the two games, contributing just a single assist to 5 turnovers. Possibly worst of all for his value, however, is that the Clippers ended up winning both of those games. Tyronn Lue was looking for an answer, and it looks like he may have found one, to the detriment of Jackson. It’s too soon to tell if this minutes reduction will end up being a permanent move, but things certainly don’t look very good for the veteran point guard at the moment. His stock is trending down quickly, and things will only get worse if the Clippers continue to win games without him seeing major minutes. This is definitely a situation to monitor.

The Price is Right: When to Draft Top Prospects (Bobby Witt Jr.)