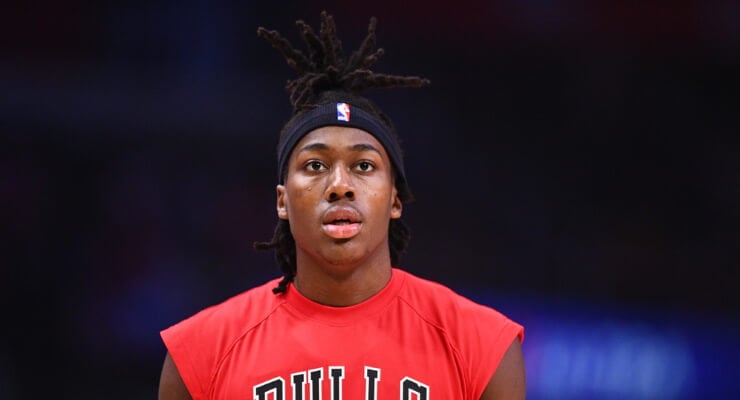 We’ve made it through another week of this chaotic NBA season, and opportunities remain as fickle as ever. One day, you’re putting up a 20-point double-double, and the next day you’re completely out of the rotation, and your stock plummets in an instant. On the other hand, you could be a guy who barely sees the floor outside of garbage time, and then all of a sudden you’re playing major minutes with solid stat lines and your stock is going through the roof. And with so much constant change, it’s crucial to stay on top of it all. This brings us to another weekly stock report, where we take a look at a handful of players who, for better or worse, have seen their stock move drastically over the past week of action. So let’s dive in and see whose needle is pointing up, and whose is heading downhill fast.

After a ho-hum start to his rookie year, Jonathan Kuminga has looked the part of a top-10 overall draft pick over the past week, playing some major minutes for the Warriors with Draymond Green set to miss at least the next two weeks. The talented rookie dropped 25 points in 26 minutes against the Bulls, following up that strong performance with a 19-point, 7-rebound effort against the Timberwolves. Now looking like a fixture in Golden State’s starting five until Draymond returns to action, he should continue to see minutes in the mid-20s or higher with consistency, especially if he keeps performing as well as he has in these first few games with extended minutes. Kuminga offers solid scoring and rebounding potential, with the ability to knock down the three and contribute in defensive categories as well, giving him a solid floor with a very high ceiling over the next couple of weeks. Kuminga’s stock is quickly on the rise, as the former seventh overall draft pick continues to improve with every game.

Another rookie whose stock is sky-rocketing after a pair of terrific basketball games is Ayo Dosunmu. The second-round pick out of Illinois has taken full advantage of the 40 and 38 minutes he was given with both Lonzo Ball and Zach LaVine out, notching a pair of double-doubles on a combined 16-for-22 from the floor. More impressively, however, is that he got one of those double-doubles with points and boards, will tallying the other one with points and assists. This ability to contribute monster numbers in all areas, also adding four triples, five steals, and a pair of blocks in those two games, makes him one of the most valuable fantasy hoops players in the league if he can somehow keep up this pace. And no, he probably won’t continue to put up stat lines like these, but he can almost cut this production in half and you’d still be happy with that output for a backend of your roster type of guy. With major minutes headed his way for at least another week, and with the Bulls playing five games in the next eight days, Dosunmu can be a major asset in fantasy over the coming days.

It’s Go(ga) time! With Myles Turner out for an extended time period, Goga Bitadze may finally have his time to shine for the Pacers. The versatile big man saw a season-high 25 minutes the other night and recorded 17 points, 8 rebounds, 2 assists, 2 blocks, and a three-pointer on an efficient 78% shooting and a perfect 2-for-2 from the line. Bitadze provides the rare combination of three-point shooting and shot-blocking while racking up boards, and he makes for a very intriguing fantasy player over the next several weeks while Turner is out. The potential downside here is that Bitadze could be used somewhat situationally, with the Pacers sometimes electing to go small, but the upside is certainly there, and the 23-year-old has gotten off to a great start. The question is still a matter of consistency regarding his minutes, but the opportunity for playing time is there, and I think he will capitalize on the opprotunity. With four games over the next six days, Goga’s stock is looking really good in the short term.

After a very solid first few months of the season, Daniel Gafford has seen his minutes evaporate over the course of a week, and it looks as though his fantasy value has vanished with them. Over the past five games, Gafford’s minutes steadily declined from 27 on January 9th to 23, 16, 11, and finally a meager 8 minutes on Monday. The third-year big man has averaged just 5.3 points and 3.3 rebounds across his last four, contributing little to nothing in any other categories. With Thomas Bryant finally back in the mix, and looking good, with 15 points in 16 minutes on Monday, it looks like it’s only a matter of time before Gafford is out of Washington’s rotation entirely. And even if he does maintain a small role for the team, it certainly doesn’t seem like it will be significant enough to provide fantasy value. It was a fun ride for Gafford while it lasted, but his stock has hit rock bottom, and both his short and long-term outlooks are bleak.

This one is honestly just disappointing. Omer Yurtseven was a hidden gem and looked to be one of the best surprises in the NBA this season. The 24-year-old, undrafted rookie out of Georgetown filled in admirably for the Heat when seemingly their entire team was out of the lineup due to health and safety protocols, and he played like a legitimate NBA starting center when given this opportunity. But now with Bam Adebayo and other rotation pieces back in the mix, Yurtseven most recently received a DNP-CD. It’s truly inexplicable. Obviously, you can’t keep giving him 30+ minutes a night over Adebayo, an all-star level player. But to remove him from the rotation entirely is somewhat astonishing. Yurtseven recorded 14 straight games with double-digit rebounds, tallying eight double-doubles in that time, and scoring over 20 points twice. He played really well for Miami, and was even better in fantasy, but now his value is all but gone. While he might earn back some bench minutes, it’s clear that Yurtseven won’t carry any fantasy appeal unless he is once again forced into the lineup out of necessity. The Omer parade has sadly come to an end.