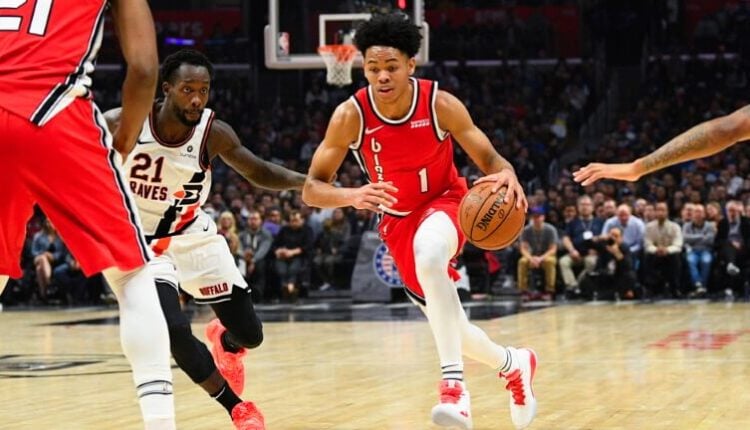 As we approach the season’s midpoint, health and safety protocols continue to dominate headlines. Several key rotation players remain out of the lineup, leaving opportunities for a number of players who otherwise may have never seen so much floor time. A lot of these players have taken full advantage of this chance, and their stock has risen accordingly. Some have even made such an impact that they look to have carved out a more significant role with the team long term, even with a healthy roster. So let’s dive in and take a look at some of these players who have seen their stock skyrocket, and others who have not had much success of late.

After a modest start to the season, Trey Lyles has gotten hot of late, with extra minutes matching a boost in production. Lyles had reached double figures while hitting at least one triple in seven straight contests before last night’s 6-point dud, but we can chalk that one up to no more than a bad night with the Pistons getting blown out by 46 points against the Bulls. The seventh-year man out of Kentucky has averaged a solid 15.6 points and 7.4 rebounds across that seven-game span, chipping in 1.4 threes and 1.0 blocks for good measure. With fairly consistent minutes in the upper 20s of late, Lyles seems cemented into a large enough role in the frontcourt to continue this production. And while his stock might take a slight hit if Bol Bol starts to earn minutes after being traded over from the Nuggets, it shouldn’t impact Lyles too much, especially if he keeps playing as well as he has been. Lyles’ stock is still safely on the rise for the foreseeable future.

Hassan Whiteside has been a valuable role player off the bench for the Jazz this season, but with Rudy Gobert currently out due to health and safety protocols, Whiteside’s stock is soaring sky high. Fully over his concussion symptoms, Whiteside dropped a vintage line of 21 points and 14 rebounds with a pair of steals and a trio of blocked shots in 34 minutes. The big man is a nightly double-double threat with elite shot-blocking potential when he has the chance to see 30 or more minutes, and that seems to be the expectation for as long as Gobert remains out of the lineup. Unfortunately, this spurt of top-tier production will be short-lived based on when Gobert does return, but this is definitely a situation to take advantage of in fantasy hoops while you can.

After four years apart, Lance Stephenson has finally reunited with the Indiana Pacers, and the results have been just as good this time around. Stephenson has taken on around 30 minutes per game over the past three due to several players in health and safety protocols, and the results have been better than anyone could have imagined. After dropping 30 points and 4 triples against the Nets, Stephenson followed up that performance with an arguably more impressive night of 16 points, 14 assists, and 4 steals. While his most recent performance was a more pedestrian 14 points with 3 threes, the important thing is that Stephenson has quickly gained the confidence and trust of his coach, and it looks like he will maintain a role even upon everyone’s return to the lineup. At the very least, his stock is at its highest point in half a decade, and the 31-year-old has shown that he’s still got it.

With both Damian Lillard and CJ McCollum out for the foreseeable future, Anfernee Simons has exploded onto the scene for the Trailblazers. The 22-year-old has easily played the best basketball of his career over the past five games, and there is no reason why he can’t keep it up as the team’s number one scoring option at the moment. Averaging nearly 37 minutes per game in that span, Simons, whose previous career high was 8.3 points per game, has done his best Lillard impression by putting up 27.8 points, 7.6 assists, and 5.0 threes. The former first round pick has looked like an all-star of late, and he will undoubtedly continue to see as many minutes as he can handle until Lillard is able to return, which might not be as soon as initially believed. With a team-leading 27.1% usage rate over these past five games, Simons should continue to dominate the ball on offense, and his stock has skyrocketed as a result.

Over the past two games, Dennis Schroder shot a combined 3-for-12 from the floor on his way to 11 points. He saw 21 minutes in each of those games, good for just the seventh and eighth most minutes on the team. Instead, guys like Josh Richardson saw increased run and played pretty well with the extra time on the court. And while a two-game sample is too small to make any major claims about Schroder’s role moving forward, it is noteworthy to mention that the struggling Celtics won both of those games. And with the backcourt combination of Schroder and Marcus Smart struggling as much as it has, a minutes reduction might prove to be the best move for the Celtics. Of the two, Schroder is certainly more likely to see his minutes start to disappear than Smart, which could be a bad sign for things to come. Schroder’s stock is quickly trending in the wrong direction, and he will need to heat up from the floor soon if he’s going to earn back starters minutes.