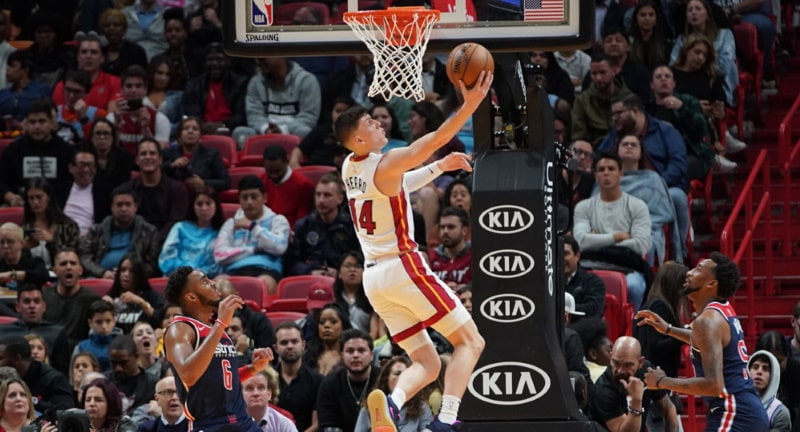 Boost your fantasy basketball playoff run with the addition of these emerging sophomores.

As General Managers, we have spent our entire season crafting and tweaking our lineups to be finely tuned and balanced machines of fantasy basketball dominance. After the NBA all-star break, the NBA morphs into a combination of serious play, tank-a-paloozas, and an awkward trade environment that breaks our rhythm.

We start to observe the fantasy basketball version of ‘Ghost Protocol’, where veteran players on bad teams who have seemingly been healthy, start to disappear in favor of younger players. Hinting towards an inevitable buyout, trade, or shutdown, players begin to miss games for a variety of reasons. Look no further than Andre Drummond, LaMarcus Aldridge, and Al Horford as examples. Other candidates for disappearance are John Wall and Victor Oladipo if they remain on the Houston Rockets. The Rockets have already hinted toward this by informing us of a future knee surgery Wall will need (He looked pretty healthy to me during his triple-double on Monday).

While unsettling at first, this shake-up brings opportunity, most notably the spike in playing time and usage for untested and undervalued sophomores. We already know the big studs like Zion Williamson and Ja Morant and solid players like PJ Washington and Darius Garland. It is the new wave talent that can seize their opportunity and deliver fantasy relevance that should be on our radar. We have already seen the impact of Kevin Porter Jr. on a shallow Houston Rockets team. Here are some other second-year players to keep an eye on that could produce surprising value down the stretch.

The fantasy love for Tyler Herro has dissipated since the bubble. At the present moment, he is a drop candidate in 12 team leagues with paltry averages of 11.5 points, 4 rebounds, 2.6 assists, and 1.1 steals on a devastating 32% field goal percentage per game over the last month. Despite this, we look to the future. Herro is sporting quality minutes in a thin Miami backcourt and is the subject of a few potential trades that could send him to better situations with higher usage. Herro has not been good, but we are in the business of looking for future potential. With one trade Herro could be an immense fantasy boost at the most important time.

If you are a Washington Wizards fan, you most certainly marveled at Rui Hachimura’s Cherry Blossom-inspired sneakers. While the sneakers aren’t available to the public, the services of Rui could very well be available on your fantasy basketball waiver wire. Rui is inconsistent but is worth investing in as he has been playing around 35 minutes a night over the last 2 weeks. During that time, Rui has averaged 16 points, 7 rebounds, and 52% field goals per game. Rui won’t provide you with value across all categories, but he is a great play at the end of your roster.

At this point in the season, it is common to see rebuilding teams enact ‘ghost protocol’ where veteran players seemingly disappear for the remainder of the season in favor of young players for development. In this case, Al Horford.  In the past two weeks, Roby has played more than 28 minutes a game. Over that span, Roby has averaged a respectable 11 points, 6 rebounds, 1 block on 57% field goals per game. Roby won’t blow you away, but as he continues to get minutes he provides stable production across your big man statistical categories.

Moses Brown is another beneficiary of OKC’s front-court shuffling. Brown came out of a bit role and now appears to be entrenched as the starter at center for the Thunder. Brown provides elite rebounds, blocks, and FG%. In the last two weeks at 26 minutes per game, Brown has averaged 10 points, 11 rebounds, 1.7 blocks, and 53% field goals per game. This type of production belongs on 10-team leagues, and most definitely 12-team leagues.

Another OKC player! Ty Jerome is in a very different position (literally) than Roby and Brown. As a guard, he plays behind Shai-Gilgeous Alexander and Theo Maledon but continues to be valuable. Ty Jerome’s ability to play on the ball or off the ball makes him an integral playmaker for OKC and a fantasy contributor. In the last two weeks, Jerome has produced 2.6 threes, 4 rebounds, 4 assists making him a useful player at the end of your bench, or in deeper league formats.

On a healthy Lakers team, Talen Horton-Tucker is relegated to a support role, typically the 3rd player off the bench getting 15-20 minutes per game. With injuries to Anthony Davis and Lebron James, it is a new day for Tucker. In a big minute role, Tucker can provide production across categories, most notably high assists from a guard/forward position. Most recently in the Lakers game vs. Pelicans on March 23, Tucker only played 20 minutes in a blowout loss. While this is a cause for concern, and even a signal that Tucker could be traded, his upside is worth a roster spot as Lebron will be out for an extended amount of time.