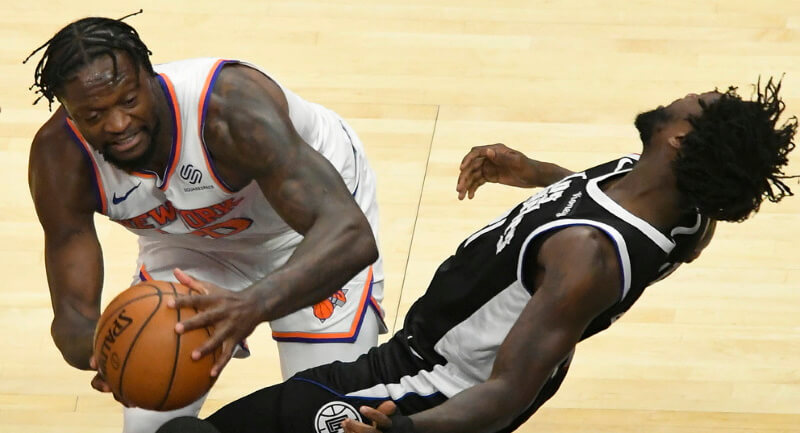 As we look back on this crazy regular season, there were certainly more oddities than usual. Between injuries, frequent rest days, and COVID-19 protocols, it was anyone’s guess as to who would actually suit up for each game. Meanwhile, there were some major overachievers and underperformers throughout the league. The Knicks and Jazz shocked the league this year, claiming the 4th seed in the east and top seed in the west, respectively, as they head into the postseason. On the other hand, the Raptors and Lakers had a regular season to forget, with the defending champs falling down to the play-in matchups, while the Raptors fell out of the playoff race entirely.

The same can be said about specific players, with a number of standout overachievers, as well as some major disappointments this year. These overachievers likely played a huge role for a lot of fantasy basketball champions, while a handful of busts likely didn’t find themselves on too many championship rosters. So let’s dive right in and take a look at some of the best and worst values of this past NBA regular season.

Perhaps the biggest overachiever in the league this year, Julius Randle led the Knicks to the 4th seed in the east, when most people had them projected to miss the playoffs. Randle was dominant on the offensive end, averaging career-highs across the board with 24.2 points, 10.2 rebounds, 6.0 assists, and 2.3 threes per game. The 26-year-old ended up with an impressive 41 double-doubles and 6 triple-doubles on the shortened year as well. Taking full advantage of coach Tom Thibodeau’s affinity for playing his starters as many minutes as they can handle, Randle led the league in minutes per game at 37:33, despite having never previously averaged more than 32:30. It was a terrific regular season for Randle, and while he will look to continue his stellar play as the Knicks look to make a deep playoff run, fantasy players are already more than satisfied by his production this year.

Between Devonte’ Graham‘s breakout season a year ago and the Hornets’ decision to draft LaMelo Ball with the third overall pick in the NBA draft, things were looking bleak for Terry Rozier, as it seemed like he would be the odd man out in Charlotte’s backcourt. Rozier instead responded by putting up the best numbers of his six-year career, making him a major overachiever compared to his projections. A career-best 45% from the floor this season fueled a surprisingly efficient season for the former Celtics guard, as Rozier put up 20.4 points per game, along with 4.3 rebounds, 4.2 assists, 1.2 steals, and an impressive 3.2 triples. Projected to be ranked outside the top 100 entering the season, it was a fantastic campaign for the 27-year-old, who was surely a strong piece on a lot of winning fantasy teams this season.

Though not very helpful down the stretch run due to the Raptors deciding to bench most of their key rotation players over the last couple weeks of the season, Chris Boucher was a major overachiever throughout the bulk of the season. While coach Nick Nurse frustratingly capped Boucher’s minutes most of the time, his career-high 24 minutes per game was still all he needed to make his presence felt both on the court and in the box score.

Boucher averaged 13.6 points, 6.7 rebounds, 1.1 assists, 0.6 steals, 1.9 blocks, and 1.5 threes per game on the year. Shooting an efficient 51.4% from the field as well as 78.8% from the line and 38.3% from beyond the arc, Boucher provided fantasy players with a rare combination of typical big-man stats along with strong shooting numbers. Boucher topped 20 points 13 times, including a career-best 38 points and 19 boards in a monster effort on April 8th against the Bulls. Topping 4 threes made on five occasions, and topping 4 swats seven times, Boucher was a fantasy unicorn despite not seeing regular minutes in the 30s. Hopefully, even better days are still ahead if he can finally see more consistent playing time.

Despite being an All-Star and helping lead his team to the top overall seed in the Eastern Conference heading into the playoffs, Ben Simmons had a very underwhelming season in terms of fantasy hoops. Drafted by the 2nd or early 3rd round in most fantasy leagues, Simmons responded by posting career lows in almost all significant categories. The 24-year-old averaged 14.3 points, 7.2 rebounds, and 6.9 assists, all of which were the lowest totals of his four-year career. And while his 55.7% shooting from the floor is impressive, his lack of improvement on free throws (61.3%), while attempting 4.9 per game, was once again a major hindrance to fantasy players. On top of that, his refusal to develop any kind of outside shot (he attempted 10 threes this season) severely limits his fantasy upside, especially as a guard. Overall, it was still a solid season for Simmons, but certainly not what fantasy players hoped for when drafting him.

After being a true model of consistency, averaging at least 17.3 points and 7.3 rebounds in 13 straight seasons, no one expected such a sudden drop-off to take place for LaMarcus Aldridge. With age obviously a major factor, Aldridge played just 26 minutes per game, his fewest since his rookie season in 2006-07. In that time, the seven-time all-star averaged an underwhelming 13.5 points and 4.5 rebounds per game, with his 47.3% shooting mark being his worst since 2014-15. And after playing a combined 26 games between the Spurs and Nets, the veteran decided to retire after experiencing some heart problems. While no one can blame him for his decision, it was not the season fantasy players envisioned when they likely drafted him within the first five or six rounds. Aldridge will go down as one of the best offensive big men of the last decade, but he was nothing more than a bust this year in fantasy basketball.

After a terrific season with the Trailblazers a year ago, Hassan Whiteside returned to the team with which his NBA career started, and unfortunately, the results were just as bad as they were a decade ago. Whiteside was projected to be a double-double machine with a good chance to lead the league in blocks this season, but he never even got the chance. The 7-footer only appeared in half of the Kings’ games, averaging just 15 minutes per contest when he did crack the rotation. Whiteside was actually quite productive in his limited minutes, averaging 8.1 points, 6.0 rebounds, and 1.3 blocks per game on an efficient 56.3% from the field. Unfortunately, the playing time was not nearly enough to make him useful in fantasy leagues. Being largely drafted in the top five rounds of fantasy drafts, Hassan Whiteside ended up being a major bust after averaging a double-double in six straight seasons.